Binocular diplopia from comitant ocular deviations without ductional deficit is often attributed to the breakdown of a previously well-controlled phoria. However, clinicians should be aware of uncommon presentations that suggest a more complex and potentially serious underlying condition. Acute acquired esotropia, the retinal hemifield slide phenomenon, and central versus peripheral rivalry are important to recognize as possibly having concerning etiologies. Strabismus surgery without treatment of this causal condition may not correct the ocular deviation and expose patients to unnecessary surgical procedures.

Diplopia from comitant ocular deviations is a relatively common clinical presentation. On examination, the presence of a ductional deficit is suggestive of neuromuscular or neurogenic etiology. Without this deficit, the cause is usually attributed to the breakdown of previously well-controlled phoria. In some cases, however, the binocular diplopia is due to a more complex and potentially serious condition. We describe three uncommon but clinically important fusional conditions that should be recognized as a “wolf in sheep’s clothing”. Acute acquired esotropia, the retinal hemifield slide phenomenon, and central versus peripheral rivalry can all present as seemingly harmless comitant ocular deviations without ductional deficit but may suggest serious underlying etiologies. It is important to recognize these conditions because strabismus surgery without treatment of the causal condition may not correct the ocular deviation and may expose patients to unnecessary surgical procedures.

A 12-year-old boy presented with binocular horizontal diplopia. On examination, his best corrected visual acuity was 20/20 in both eyes (OU) with -1.00 diopter correction OU. The pupils were isocoric without a relative afferent pupillary defect (RAPD). External, slit lamp biomicroscopy, intraocular pressure, and fundus exams were normal OU. Motility examination showed a comitant 25 prism diopter esotropia (ET), but there was no ductional deficit. On neuroimaging, an initial computed tomography (CT) head was negative. He underwent strabismus surgery and his eyes were initially aligned but then the diplopia and the ET recurred. Cranial magnetic resonance imaging (MRI) subsequently showed a Chiari I malformation that required neurosurgical repair. The ET and diplopia subsequently resolved.

An acute acquired comitant esotropia (AACE) is an acute-onset ET that measures the same degree of misalignment in all positions of gaze. Although AACE is often benign and can be treated with prism and/or strabismus surgery, the ophthalmologist should be aware of the potential for an underlying etiology (i.e., the “wolf hiding in sheep’s clothing”). In fact, Liu et al. reported that up to 40% of children presenting with an identifiable neurologic disorder had AACE as their presenting ocular sign.1 Another retrospective case series suggested that 6% of children with AACE had neurologic disease.2 Williams et al. described six children with AACE who were found to have tumors of the brainstem or cerebellum.3 Lewis et al. reported that AACE could be one of the earliest presentations of a Chiari malformation.4 Passo et al. reported a case of recurrence of ET due to AACE following initially successful strabismus surgery.5 The patient developed downbeat nystagmus, and neuroimaging subsequently confirmed the diagnosis of the Chiari malformation.5

The mechanism of comitant ET in AACE remains controversial, but one hypothesis suggests the existence of an underlying non-localizing sixth nerve palsy causing comitance.2 Regardless of the mechanism, clinicians should be aware that AACE can be due to an underlying intracranial lesion.2 Some of the red flags proposed include larger esodeviation at distance, older age at onset, papilledema and recurrence of AACE after strabismus surgery.6 Patients with AACE due to an underlying structural lesion (e.g., Chiari malformation) should usually undergo treatment for the underlying cause prior to strabismus surgery.5,7,8

A 14-year-old girl presented with intermittent binocular vertical diplopia and headache. Her visual acuity measured 20/20 with +1.00 sphere OU. Pupils were normal without RAPD. The remainder of the eye examination was normal OU and a CT scan of the head was negative. A motility exam showed an intermittent ET of 12 prism diopters but full ductions and versions. Automated perimetry (Humphrey visual field 24-2) showed a bitemporal hemianopsia (Figure 1). A subsequent cranial MRI confirmed a pituitary macroadenoma that was resected, resulting in complete resolution of the diplopia and visual field defect OU.

Binocular diplopia results from afferent disease that stems from one of several potential mechanisms. One interesting but under-recognized cause of diplopia is the retinal hemislide phenomenon. In this condition, two intact nasal hemifields are juxtaposed and do not overlap. This lack of visual field overlap can lead to fusional breakdown, causing the visual fields to “slide” apart and produce intermittent diplopia. Although classically described with bitemporal hemianopsia, the retinal hemifield slide phenomenon can occur with any set of non-overlapping visual field defects.

The earliest descripton of this phenomenon came in 1911, with reports of “non-paretic diplopia” in patients with underlying pitutary adenomas.9,10 In a retrospective study of 260 patients with pitutary adenoma, 98 had diplopia but an underlying ocular motor deficit was only noted in 14 of these 98 (14%) patients. The remainder (86%) of the cases were attributed the hemifield slide phenomenon.11 This phenomenon has also been described in patients with heteronymous field defects due to pseudotumor cerebri, failed shunt placement, or large residual deficits after strabismus surgery.12 In a patient with a bitemporal hemianopia, the object of regard is beyond the fixation point and falls on the nasal retina, projecting to the blind temporal field. This produces a gap in the field of vision, which can, in the presence of a motor fusion deficit, lead to diplopia. The hemifields can slide in the horizontal or vertical plane and produce horizontal (esotropia or exotropia) or vertical (hypertropia or hypotropia) deviations (Figure 2).9 Stone described a central vertical strip of ganglion cell layer projecting to both left and right receptive fields of either eye that helps to fuse disparate images from either eye and maintain single vision. In patients with heteronmynous field defect (e.g., bitemporal defects), the loss of input from this central zone leads to disruption of image perception and breaks the fusion. For example, in the presence of an exophoria or esophoria, there is a duplication of this vertical strip of vision and a separation of the visual strip that accounts for the disconjugate images perceived.13 Likewise, other visual field defects (e.g., bilateral heteronymous altitudinal field defect from a ischemic optic neuropathy) have also been reported to cause this hemislide-related image disparity.14 Prisms and strabismus surgery could be used to improve binocular fusion in these patients to reduce the diplopia from the hemifield slide, but the results are variable.12 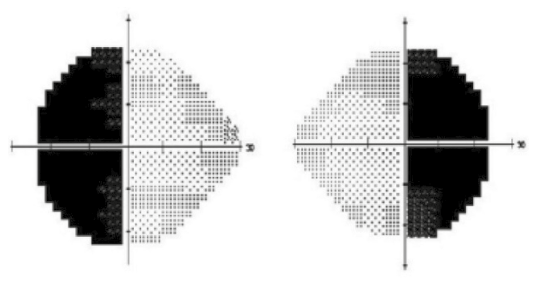 A 35-year-old white man presented with binocular diplopia and metamorphopsia in the right eye (OD). On examination, his visual acuity measured 20/50 OD and 20/20 in the left eye (OS). The pupils were normal without RAPD. Motility examination revealed a comitant small angle right hypertropia that the patient was unable to fuse with prism. Ophthalmoscopic exam revealed an epiretinal membrane OD consistent with 20/50 level of vision. CT and MRI scans of the head were normal.

An epiretinal membrane can cause distortion in anatomic distribution of the fovea leading to decreased visual acuity and metamorphopsia. Although monocular diplopia is a well described effect of macular pathology (including subretinal neovascular membranes, foveal laser, etc.), binocular diplopia is more unknown. Binocular diplopia in this setting can be explained by central versus peripheral rivalry. Normally, images falling on the corresponding retinal points are unified to perceive a single final image. Peripheral fusion is the attempt of vergence movement by the eyes to maintain a single image. Alignment of the photoreceptors and their corresponding physiologic receptive fields drives peripheral fusion even when the images fall outside the central macula. Any disruption of this delicate balance in fusional capacities of the eye, in the form of anatomic distortion of the receptive elements, can break the fusion. In this case, foveal displacement from the epiretinal membranes (ERM) leads to central versus peripheral rivalry and, consequently, to binocular diplopia.15

Single image displayed in a well-lit room (A) seen as double in presence of central versus peripheral rivalry (B). Removing the peripheral fusion by switching of lights makes the patient see a single image in the dark (C).

Ververka et al. described 25 patients with an ERM and binocular diplopia; 44% of these patients had central-peripheral rivalry as the attributable cause.16 The light off-on test has been described as a suitable and simple test that can be performed in clinic on these patients. The patient is shown a single white optotype letter on a black background. The size of the target should be sufficient for the patient’s level of visual acuity (Figure 3A). A patient with the rivalry will see two images, which could be horizontally or vertically separated in ambient light conditions (Figure 3B). The test is then repeated with the light switched off and often this alleviates the diplopia symptoms and patient reports seeing a single image (Figure 3C). This is based on the principle that when the light is switched off, the peripheral fusion response, which is typically the stronger response in bright light, is dampened.17

Although prisms can be used to try and correct this deviation, there is often a variable and modest response. Instead, treatment of the underlying macular pathology (e.g., ERM peel) may better restore central and peripheral fusion.18 The Bangerter filter, which is a partially occlusive filter for glasses, has been used with some success in patients who have failed prism therapy and are unsuitable for strabismus surgery.19

Clinicians should be aware of uncommon presentations of binocular diplopia in the eye clinic, including acute acquired ET (which may be due to an underlying Chiari I malformation), the retinal hemifield slide phenomenon (which can be due to an underlying bitemporal hemianopsia), and central versus peripheral rivalry (which can be due to macular pathology and foveal displacement). The absence of ductional deficit on extraocular motility testing and the comitant nature of the deviations in all three conditions may mislead the clinician into believing that the cause is benign. Clinicians should search for the key aspects and differentiating features of the conditions above to avoid the “wolf in sheep’s clothing” scenario in the strabismus clinic. It should be noted that strabismus surgery may not correct the ocular deviation without treatment of the underlying condition.⬛

Ashwini Kini, Sowmya Yennam, Bayan Al Othman, and Andrew G Lee have nothing to disclose in relation to this article.

All procedures were followed in accordance with the responsible committee on human experimentation and with the Helsinki Declaration of 1975 and subsequent revisions, and informed consent was received from the patients involved in this case series. 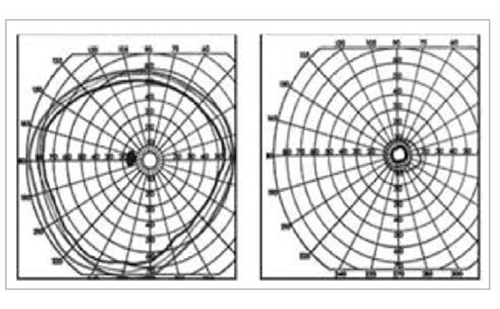 Nonorganic vision loss (NOVL) or functional vision loss (FVL) is the presence of abnormal vision, or visual fields, without an organic pathology, despite a thorough and comprehensive evaluation. The symptoms will be inconsistent with the results of an objective examination.1–3 In some cases, vision loss is intentionally feigned, while in others it occurs under unconscious conditions. […] 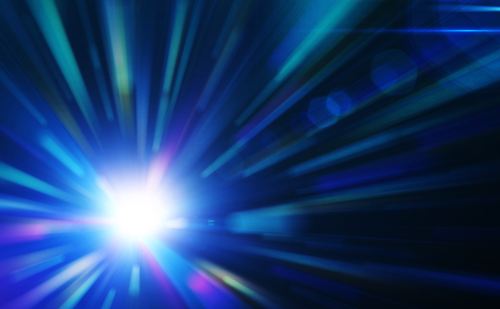 Neuro-ophthalmology in the Geriatric Eye

As the percentage of elderly people that make up the population of the USA grows, it is imperative to shift our focus on how to best address their needs and outline an approach to the geriatric eye. This review describes common physiologic and pathologic conditions affecting the aging eye including presbyopia, posterior cortical atrophy, giant […]

A Review of Binocular Treatment for Amblyopia

The term amblyopia, derived from the Greek words α’µβλυ’ς (weak) and ω˛″ψ (eye), is defined as a unilateral (or, less commonly, bilateral) reduction of visual acuity as a result of inadequate visual experience during early life, which leads to a disruption of the normal visual neurodevelopment process.1 It is associated with anisometropia, ametropia, stimulus deprivation, strabismus and nystagmus, and it […]