Prostaglandins are the most prescribed glaucoma drugs all over Europe; however, great differences exist from country to country in drugs prevalence. Generics represent an important glaucoma market share. The economic situation and local restriction to healthcare expenditure may influence physician choice in drugs prescription.

Very well-defined guidelines have been issued by the European Glaucoma Society to suggest a correct treatment.2 Despite this, we wish to investigate if the medical strategy adopted for glaucoma is the same all over Europe. The data obtained by International Market Share (IMS), recording drug’s prescriptions in the five biggest European markets: Germany, France, Italy, Spain and UK, have been used to monitor the ophthalmologists choices for glaucoma medical treatment. IMS reports the real sale of any drug and it reflects faithfully the true market behaviour in any country.

According to our data (see Table 1) prostaglandins (PG) were the most used glaucoma drug all over Europe, although a huge difference was observed among the five countries investigated: PG indeed showed a different prevalence with 51 % in the UK, 41 % in France, 37 % in Spain, 29 % in Germany and 28 % in Italy.

It is quite hard to state if medical treatment of the same disease, glaucoma, has more similarities or discrepancies in Europe. What is clear is that prostaglandins are the most prescribed drugs everywhere. Generic drugs represent an important market share all over Europe. The different socioeconomic situation of each country, together with local restrictions to healthcare expenditures, may partially explain the differences in combination drug prescription and in generics prevalence.5–7 Also the tendency to start with surgery as a primary option, instead of medical therapy, may explain a different use and prevalence of drugs from country to country.8–10 We did not investigate the prevalence of surgery against medical treatment since we do not have data about surgery prevalence and above all the clinical and costeffectiveness of contemporary medication compared with primary surgery is not known.11 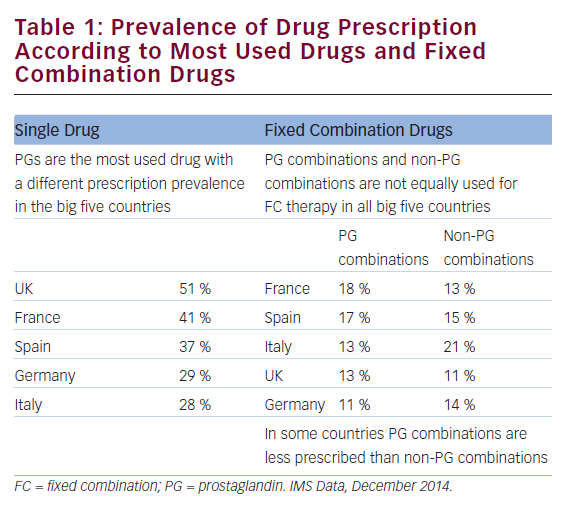 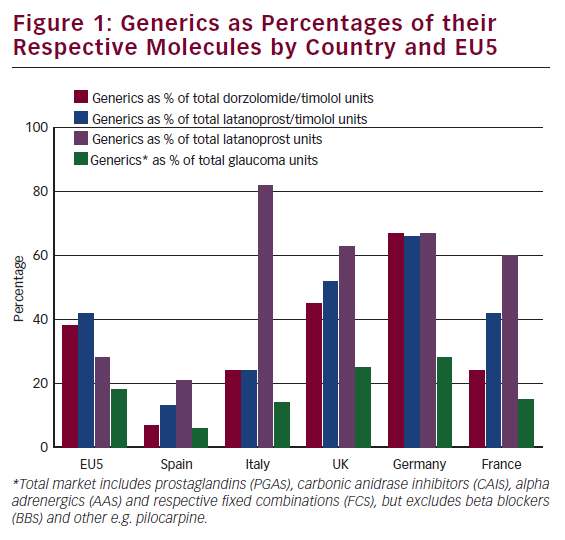 Renato De Natale has nothing to disclose in relation to this article. No funding was received in the publication of this article.