Retinal vein occlusions are still one of the leading retinal vasculopathies with a strong impact on the quality of life. Despite the success in symptomatic treatment with anti-vascular endothelial growth factor (VEGF) medication, no real causal therapy has been developed so far. As most of the pathogenetic changes have been observed in the vitreoretinal interface, actual therapeutic strategies are being focused on this area. Modern surgical techniques may help to release vitreovascular traction, stop cytokine activation and improve retinal oxygenation.

Current evidence suggests two main unquestionable principles of therapy: first, the reduction of macular oedema (MO), venostasis and extravasation of cytokines and other blood components by multiple administrations of intravitreal anti-angiogenetic medication (IVAM, such as vascular endothelial growth factor [VEGF]-inhibitors) in the short- and mid-term; and, second, the recognition and treatment of cardiovascular risk factors, especially for CRVO patients, in the long term.5,6

Unfortunately, no real causal therapy for RVO has been developed so far. However, most of the pathogenetic changes following RVO are observed in a region called the vitreoretinal interface (VRI): extravasation of cytokines, growth factors and other blood components, secondary inflammatory processes and the breakdown of the blood–retina barrier. Anatomically, the VRI consists of the posterior vitreous cortex, the inner limiting membrane (ILM) and an intervening extracellular matrix.7 Consequently, several new surgical strategies targeting the VRI have been developed to overcome the need for repeated intravitreal injections over months and years, and to optimally reduce the risk of late local or systemic complications.

Anatomic Role of the Vitreoretinal Interface It has been observed that the ILM is much thinner in the regions close to the retinal vasculature. Moreover, a strong adhesion of vitreous with blood vessels does exist with a tendency for traction, vascular leakage, neovascularisation (NV) and haemorrhage.8,9 In a prospective case-control study, vitreovascular traction at the occlusion site was significantly associated with BRVO.10 Similarly, other studies showed a higher incidence for MO or NVs in eyes with vitreomacular adhesions after BRVO or CRVO, respectively.11,12 Therefore an attached posterior vitreous cortex with or without traction may play a pathogenetic role in RVO.

In fact, the induction of a posterior vitreous detachment (PVD) with or without plasmin seems to protect against retinal or optic disc NV in severe CRVO,11 increases vitreal oxygen levels via microplasm13 and may improve acuity and reduced MO in BRVO.14 Pars-plana vitrectomy alone can also improve acuity and/or MO in RVO by removing blood components, vitreomacular traction and the scaffold for later NV15,16 (see Figure 1).

Vitrectomy may be combined with ILM peeling with significant anatomic and functional improvements.17 Further additional tools include radial optic neurotomy (RON) at the level of the lamina cribrosa in CRVO (see Figure 2) or adventitial sheathotomy at the arteriovenous crossing site in BRVO. Whereas RON has proved a significantly better anatomical and functional outcome in several randomised trials,18,19 adventitial sheathotomy showed only a small, if any, benefit – if compared with standard vitrectomy or IVAM therapy.20,21

RON seems also to protect patients from anterior NV; however, this technique is more invasive and risky than routine vitrectomy procedure.22 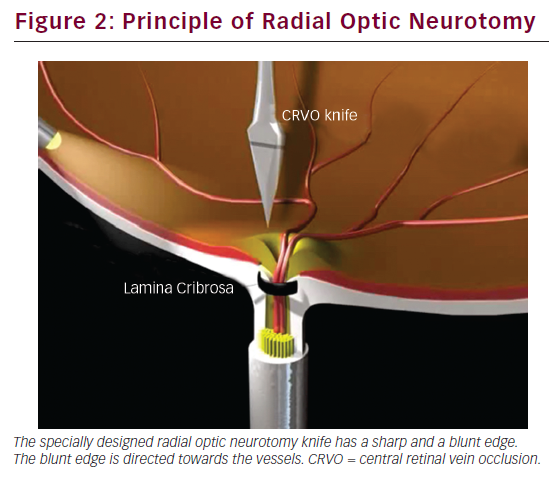 Cytokine Activation in the Vitreoretinal Interface
Ischaemia of the inner retinal layers in RVO leads to a massive and sustained upregulation and secretion of multiple growth factors and cytokines, such VEGF-A, intercellular adhesion molecule 1 (ICAM- 1), interleukin (IL)-1, IL-6, pigment epithelium-derived factor (PEDF), monocyte chemotactic protein-1 (MCP-1), aquaporin-1 (Aqp-1), Aqp-4, pentraxin-3 (PTX-3) and plasminogen into the VRI, and the activation of other factors, as matrix metalloproteinase-2 (MMP-2), MMP-9, tightjunction protein (ZO-1) and occludin on the endothelial surface23,24; see Figure 3. In longer-standing CRVO of a duration over 7 months, only MCP-1 is still significantly elevated, pointing out to monocyte recruitment to the vessel wall in the later course of the disease.25 Furthermore, all vitreous cytokine levels are significantly correlated with central retinal thickness and the severity of MO, determined by optical coherence tomography (OCT)26,27 (see Figure 1).

Therefore, state-of-art therapy is mainly focused on repeated intravitreal injections of anti-inflammatory medication, primarily anti-VEGF antibodies, to counteract the cascade of inflammatory mediators.28 Unfortunately, this therapy is needed regularly (monthly) over a rather long time period, similar to the treatment of neovascular age-related macular degeneration (AMD). To overcome the need for frequent injections, intravitreal steroid implants with a longer half-life have been 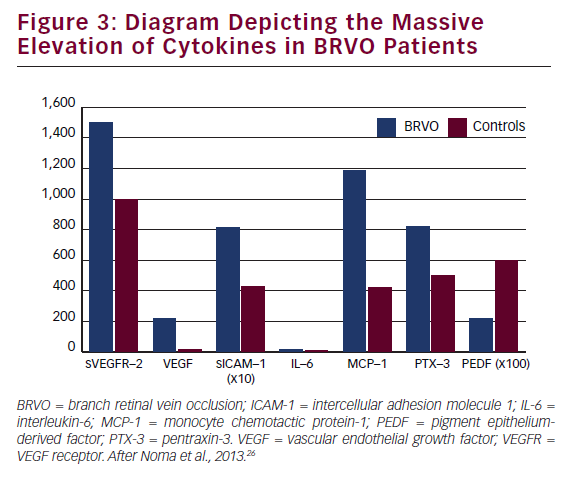 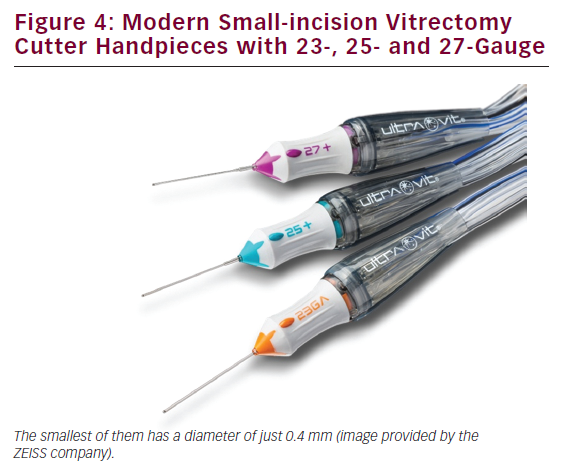 developed,29 and can be combined with vitrectomy to reduce the load of mediators in the VRI and in the vitreous space.

Oxygen Tension and Vitreoretinal Interface
As the vitreous gel seems to consume oxygen even under normal conditions in an ascorbate-dependent manner,30 this fact may have detrimental effects in case of ischaemic retinopathies such as RVO. In fact, a marked increase in oxygen tension in the VRI after vitrectomy was observed. It can be explained by simple loss of vitreous gel (and ascorbate), by an oxygen increase from the retinal vessels and by the loss of an oxygen gradient and tension regulation.31 Therefore, vitrectomy with PVD may produce a higher oxygen tension with possible benefical effects for ischaemic eye diseases.32,33

PVD alone has shown to be effective to improve intravitreal oxygen levels in animal models with or without experimental RVO.13,31

Conclusion
Several improved surgical techniques targeting the VRI in different aspects have been emerged and proved durable effects in RVO, especially iatrogenic PVD and modern small-gauge vitrectomy (see Figure 4). However, as in other medical fields, it seems a question of perfect case selection and timing. Finally, much more evidence is required: as the interest in longer-lasting, safe and easy surgical strategies is growing, these procedures must respect and be compared with established standard treatments, such as intravitreal anti-VEGF injections, steroids or laser therapy.

Simon Brunner has nothing to disclose in relation to this article. There were no publication fees associated with this article.