Diabetic macular oedema (DMO) is responsible for much of the vision loss associated with diabetic retinopathy, which is the leading cause of blindness in working-age adults. Approximately 21 million people worldwide have DMO. The standard of care for DMO has been laser photocoagulation: this option has only a limited ability to reverse vision loss and is associated with a risk of scarring and complications. Corticosteroids have also been used in DMO treatment, but are associated with side effects such as elevated intraocular pressure and cataract. Knowledge of the role of vascular endothelial growth factor (VEGF) in the pathogenesis of DMO has led to the widespread use of anti-VEGF agents. Intravitreal bevacizumab, which is not approved for any retinal disorders, is used off-label for the treatment of DMO. Intravitreal ranibizumab (IVT-AFL) (once monthly) and intravitreal aflibercept (once every 2 months after a loading dose) have been approved for the treatment of DMO. This review summarises the clinical evidence supporting the role of IVT-AFL in the treatment of DMO. Analysis of efficacy and safety data suggests that aflibercept could be used as a first-line treatment in DMO.

Diabetic macular oedema (DMO) is responsible for much of the vision loss associated with diabetic retinopathy, the leading cause of blindness in working-age adults.1–3 DMO is characterised by thickening of the central retina due to leakage of fluid from blood vessels, and can occur at any stage of retinopathy.4 Recent estimates suggest that around 21 million people worldwide have DMO.5

Evaluation of DMO should be based on both functional (visual acuity) and anatomical criteria. Optical coherence tomography (OCT) is used to assess retinal morphology and thickness of the macula, and additional methods for anatomical assessment include biomicroscopy, fundus photography and fluorescein angiography.6,7 Although focal laser photocoagulation has been the standard of care for DMO, it can only slow progression and its ability to reverse vision loss is low;8,9 in addition, it has been associated with a risk of scarring and other thermal complications.10,11 The corticosteroids (dexamethasone, triamcinolone acetonide and fluocinolone acetonide) have also been used for treatment of persistent or refractory DMO and provide improvements in retinal thickness and visual acuity. However, steroidrelated side effects, such as elevated intraocular pressure and cataract, must be considered.12,13

How Does Intravitreal Aflibercept Work?

Aflibercept is composed of extracellular domains from human VEGF receptors 1 and 2 fused to the Fc portion of human immunoglobulin-G1.19 By contrast, bevacizumab is a recombinant, humanised monoclonal antibody that binds all isoforms of VEGF-A, and ranibizumab is a humanised anti-VEGF antibody fragment comprising the antigen-binding Fab moiety, without the Fc domain, which was derived from bevacizumab.20,21 These differences in design result in substantial differences in the pharmacokinetic properties of these drugs.

Of particular relevance is the synergistic relationship between VEGF and placental growth factor (PlGF) in the development of angiogenesis, including the disruption of the retinal barrier during diabetic retinopathy.16,22 In vitro studies showed that aflibercept binds PlGF-2 (KD: 38.9 pM), whereas ranibizumab and bevacizumab do not. Consistent with this finding, only aflibercept inhibited PlGF-induced VEGF receptor 1 activation and HUVEC migration.21 In immortalised bovine retinal endothelial cells, proliferation induced by a combination of VEGF-A and PlGF was completely suppressed by aflibercept,23 but only partially suppressed by ranibizumab.24 All three compounds have been shown to reduce VEGF-A-stimulated migration,23,24 and therapeutically achievable concentrations of aflibercept not only normalised VEGF-A-stimulated cell migration but drove it below the level of basal migration.23

The phase III studies VISTA-DME and VIVID-DME have confirmed the promising findings of the DA VINCI study. At 52 weeks, IVT-AFL was superior to laser photocoagulation in improving BCVA and CRT from baseline (see Table 1 and Figure 1). Compared with the respective laser treatment groups, a significantly greater proportion of patients in the IVT-AFL groups experienced improvements from baseline in BCVA of 15 ETDRS letters or more in the VISTA-DME and VIVID-DME studies (see Table 1). The proportion of patients showing an improvement in the DRSS was also significantly greater in the IVT-AFL groups than in the laser groups: in VISTA-DME, an improvement of two steps or more was observed in 33.8 % and 29.1 % of the IVT-AFL 2q4 and 2q8 groups, respectively, compared with 14.3 % of the laser group (p<0.01); the corresponding proportions in VIVID-DME were 33.3 % and 27.7 % in the IVT-AFL groups compared with 7.5 % in the laser group (p<0.001).27 Although not yet fully published, data on longer-term outcomes in the VISTA-DME and VIVID-DME trials suggest that the statistically significant benefits over laser achieved at week 52 were maintained through 100 weeks.28 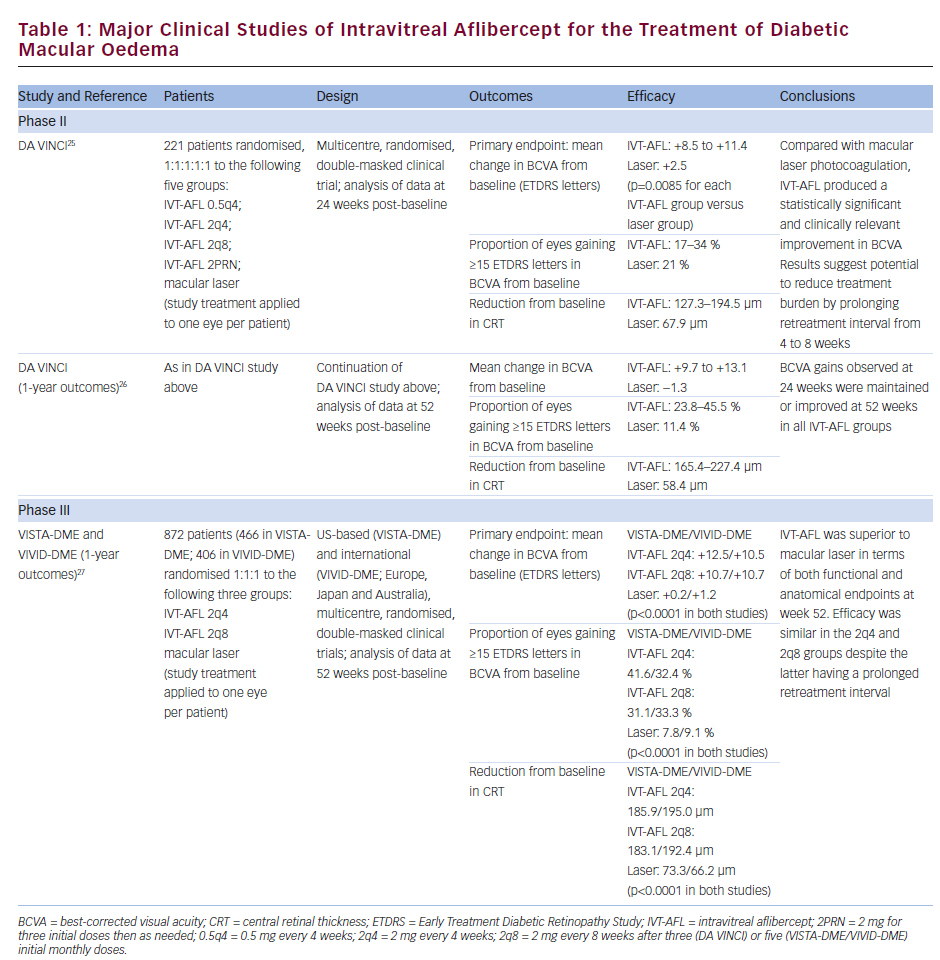 IVT-AFL has also been directly compared with IVR and IVB in a recent US National Institutes of Health-sponsored trial: the Diabetic Retinopathy Clinical Research Network (DRCR.net) comparative effectiveness study in patients with DMO (Protocol T).32 In this study, 660 adults with DMO were randomised to receive IVT-AFL 2.0 mg, IVR 0.3 mg or IVB 1.25 mg. Over 52 weeks, IVT-AFL produced a statistically significant two-letter BCVA benefit over IVR (13.3 versus 11.2 mean letter gain; p=0.03) and a statistically significant >3 letter BCVA benefit over IVB (13.3 versus 9.7 mean letter gain; p<0.001). These BCVA gains were achieved with a median of nine IVT-AFL injections versus 10 IVR and 10 IVB injections. Moreover, a significantly smaller proportion of patients receiving IVT-AFL required laser photocoagulation (at least once between 24 and 48 weeks) versus those receiving IVR or IVB (37 % versus 46 % or 56 %; p<0.001 for overall comparison).

The benefits of IVT-AFL in the Protocol T study were primarily driven by the patients with worse visual acuity at baseline.32 In the subgroup with better baseline vision (initial visual acuity letter score 78–69 or approximately 20/32–20/40), the mean improvement was 8.0 with IVT-AFL, 8.3 with IVR and 7.5 with IVB (p>0.50 for each pairwise comparison). However, in the subgroup with worse baseline vision (initial letter score less than 69 or approximately 20/50 or worse), IVT-AFL produced statistically significant and clinically meaningful benefits of approximately five letters over IVR (18.9 versus 14.2 mean letter gain; p=0.003) and approximately seven letters over IVB (18.9 versus 11.8 mean letter gain; p<0.001). Of note, a 15-letter gain was observed in 34 % more IVT-AFL-treated eyes than IVR-treated eyes 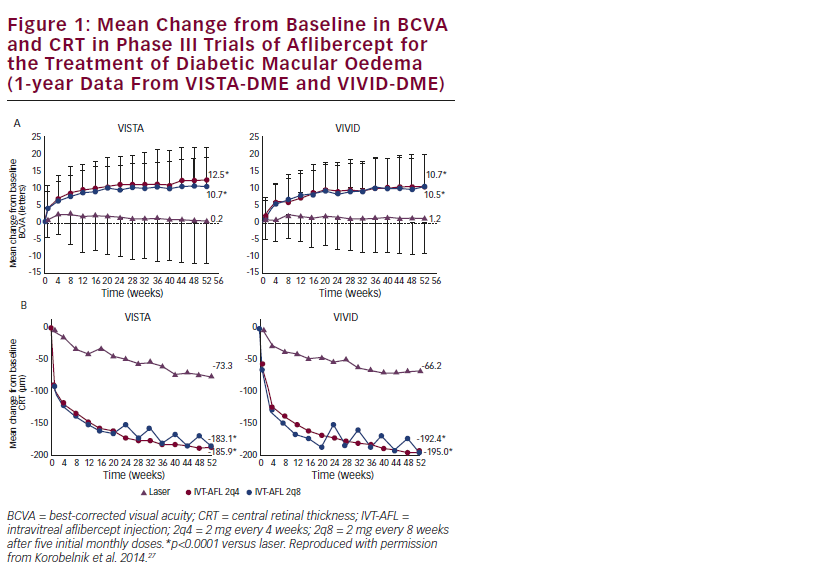 (67 % versus 50 %) and 63 % more IVT-AFL-treated eyes than IVBtreated eyes (67 % versus 41 %). In addition, among the subgroup with worse baseline vision, visual acuity benefits of IVT-AFL over IVR and IVB were demonstrated as early as 4 weeks after treatment initiation. Improvements in terms of decreased CRT mirrored those observed for visual acuity outcomes, with IVT-AFL showing greatest benefits over IVR and IVB among the subgroup with worse baseline vision.32 When considering the results of the Protocol T study, it should be noted that although the DRCR.net trial used the 0.3 mg dose of IVR (not the 0.5 mg dose that is approved in Europe), previous evidence suggests that there is no meaningful difference in efficacy outcomes between the two IVR doses.33 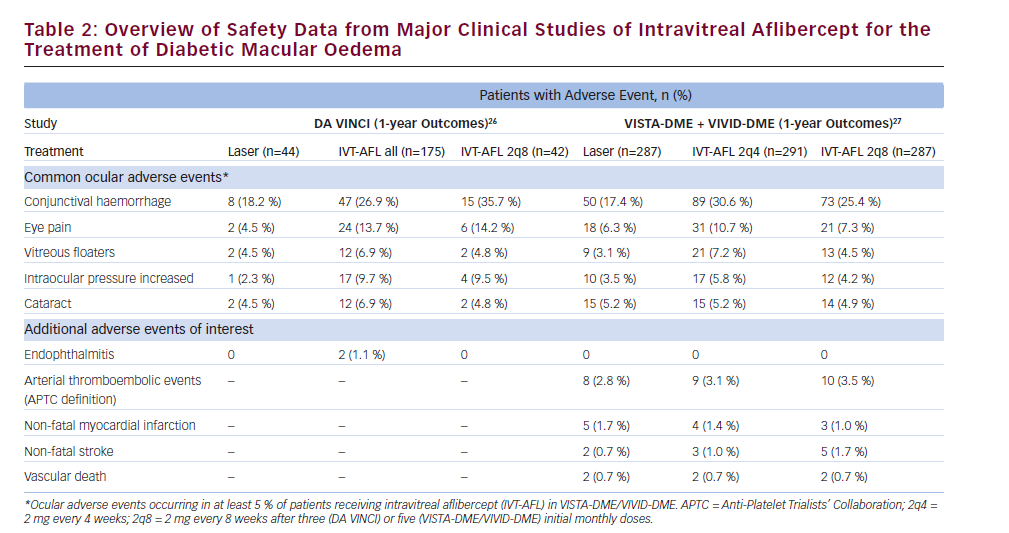 An overview of 1-year safety data from the DA VINCI, VISTA-DME and VIVID-DME studies is presented in Table 2. The overall incidence of ocular adverse events (AEs) in the VISTA-DME and VIVID-DME studies was similar across treatment groups, and no clinically relevant differences were observed in the frequency or pattern of serious ocular AEs. The incidence of endophthalmitis – a potential complication of intravitreal injections34 – was low, with only two cases reported across the study programme (a third patient in the DA VINCI study25,26 developed uveitis). Intraocular inflammation was also infrequent, occurring in 0.1–0.4 % of intravitreal injections in the first 52 weeks of the VISTA-DME and VIVIDDME studies.27

The possibility of systemic AEs is a concern associated with the use of intraocular anti-VEGF therapies.36 The DA VINCI study did not show any significant safety signals suggestive of an increased risk of systemic AEs in patients receiving IVT-AFL.25,26 The VISTA-DME and VIVID-DME studies also showed no clear trends between treatment groups in serious systemic AEs and arterial thromboembolic events defined by the Anti-Platelet Trialists’ Collaboration (APTC; see Table 2).27 In the recent DRCR.net comparative effectiveness study in patients with DMO (Protocol T), the rates of APTC-defined arterial thromboembolic events were uniformly low: 3 % in the IVT-AFL group, 5 % in the IVR group and 4 % in the IVB group. Overall rates of pre-specified systemic AEs were similar in the three treatment groups.32 However, the ability of these clinical trials to detect rare systemic AEs may be limited by their relatively small sample sizes; ongoing surveillance will shed further light on the safety profile of IVT-AFL.27

IVT-AFL is a recently approved anti-VEGF treatment option for patients with visual impairment due to DMO. It has a markedly higher affinity for VEGF than IVR and IVB, and it also targets PlGF, another member of the VEGF family that has been shown to contribute to angiogenesis. In contrast to IVR (which requires once-monthly dosing), IVT-AFL has been approved with a dosing regimen of one injection every 2 months; it may therefore reduce the number of injections and office visits required, thus reducing the burden of treatment for patients, physicians and the healthcare system.

In clinical trials, IVT-AFL improved visual acuity and CRT to a significantly greater extent than macular laser photocoagulation; it also produced improvements in the DRSS, suggesting regression of the underlying diabetic retinopathy. IVT-AFL was generally well tolerated: the rates of endophthalmitis and intraocular inflammation were low, and the rates of APTC-defined arterial thromboembolic events showed no clear trends between treatment groups. Increases in intraocular pressure in patients receiving IVT-AFL were less common than previously reported in patients receiving intraocular steroids (based on indirect study comparison) and were generally transient; the incidence of another steroid-related AE, cataract, showed no difference between treatment groups in the phase III trials of IVT-AFL.

Results from a recent meta-analysis and a recent direct comparative effectiveness study suggested that IVT-AFL may be superior to IVR and IVB in terms of the extent of visual and anatomical benefits. Overall, these findings highlight the role that IVT-AFL has to play in the treatment of patients with DMO.

Editorial support was provided by Michelle Olsher of PAREXEL, which was funded by Bayer Pharma AG. No publication fees were associated with the publication
of this article