Enucleation consists of surgical removal of the entire eye globe with preservation of the conjunctiva, extraocular muscles, orbital fat, and optic nerve. This surgical procedure is generally accepted treatment for intraocular malignancies, blind painful eye, severely traumatized eye, phthisis bulbi, and to improve cosmetic appearance. Once the eye is removed, orbital volume enhancement typically requires implantation of spherical materials that can be classified into two major groups: non-porous and porous orbital implants. Different surgical techniques have been described in the literature, including muscle imbrication technique and the myoconjunctival enucleation technique (both with a non-integrated implant) and the more recent integrated orbital implants technique that results in less implant-migration and improved prosthesis movement. In this review, we discuss indications, orbital implant choices and the main enucleation surgical techniques reported in the literature.

Enucleation, or surgical removal of the entire eye globe, was described by Bartisch in 1583, and was described in combination with orbital volume replacement (implant) by Mules in 1585.1–3 In the US, trauma is the leading indication for enucleation (40.9% of cases), followed by tumors (28% of cases).4,5 Other indications include painful blind eye, phthisis with degeneration, congenital anophthalmia, severe microphthalmia, unresponsive endophthalmitis, and for improvement of cosmesis in a blind eye.4

The orbital implant and overlying prosthesis work together to allow excellent overall cosmesis and eye movement after enucleation. Most patients are pleased with the result and few require secondary cosmetic surgery. After healing, the appearance of the anophthalmic patient’s affected eye should be similar in all aspects to their other, normal eye.17 Herein, we briefly review the main types of orbital implants, and the main enucleation surgical techniques reported in the literature.

Types of Implants and Enucleation
Surgical Techniques
In the modern era, several types of orbital implants are available for volume replacement after removal of the eye. They can be classified into two major groups: non-integrated orbital implants (primarily polymethylmethacrylate [PMMA]) and integrated porous orbital implants (typically plastic, bone, or coral).18–24 The difference between these two major groups is that integrated implants allow fibrovascular invasion or incorporation into the living orbit. Graue and Finger demonstrated that on positron emission tomography (PET)/computed tomography (CT) imaging, porous orbital implants absorb 18-fluorodeoxyglucose contrast, indicating metabolic activity within the implanted device.25 That fibrovascular invasion does not occur with non-integrated implants.

Surgical Techniques
Enucleation surgery is usually done under general anesthesia. First, the surgeon resects the conjunctiva from the surgical limbus (periotomy), followed by dissection of the Tenon’s capsule (tenotomy). Then the four recti muscles (with or without the two oblique muscles) need to be isolated, tied by 6–0 absorbable suture, followed by muscle resection from the insertion, and homeostasis. Then the eye globe should be pulled anteriorly (either from the stump of the medial rectus, assisted by cryotherapy, or by sutures at the limbus from two sites), followed by resection of the optic nerve (the length should be 8–12 mm in cases of

retinoblastoma). Then a plastic or metallic dummy implant can be used to check the best size for the orbital implant (i.e. the maximum size that fills the orbit and allows adequate suturing of the anterior layers without tension). Once the required size is identified, the selected implant should be inserted deep in the socket (with or without implant injector), and deeper than the posterior Tenon’s layer. Table 1 illustrates the differences between the three main enucleation surgical techniques.

After fixation of the implant in the correct site and attachment of the muscles according to technique, the posterior and anterior parts of the Tenon’s capsule will be sutured by absorbable interrupted sutures (5–0 or 6–0) separately, followed by closure of the conjunctiva by running 6–0 absorbable suture. In the case of the myoconjunctival technique, then the exteriorized muscle sutures are tied onto the conjunctival surface and the suture knot left exposed.

To maintain the fornices and to prepare them for prosthesis fitting (usually six weeks after enucleation), a conformer of adequate size (small, medium, or large) needs to be inserted anterior to the sutured conjunctiva, with topical antibiotic and tight patching of the eye for two to five days. An alternative to the conformer is immediate painted prosthesis insertion at the time of the surgery, or early prosthesis insertion at the time of patch removal, to allow for cosmetic rehabilitation and improved quality of life. This prosthesis may need to be replaced by a custom-made one after six weeks.31,32

Discussion An ideal orbital implant and surgical technique should yield excellent prosthesis motility and cosmesis, with very few complications. The technique includes choosing an appropriately sized implant, positioning the implant deeply in the orbit, meticulously closing the Tenon capsule over the implant, and securing the conjunctiva over the implant without tension.

Imbrication of the rectus muscles over a non-integrated implant traditionally was thought to impart movement to the implant and prosthesis. Like a ball-and-socket joint, when the implant moves, the prosthesis on surface moves. However, because the so-called ball and socket are separated by layers of Tenon’s capsule, imbricated muscles, and conjunctiva, the mechanical efficiency of transmission of movement from the implant to the prosthesis is suboptimal. In addition to that, imbrication of the recti over the smooth surface of nonintegrated implants can result in implant displacement and migration.12–15

The cosmetic appearance of the prosthesis36,37 and implant migration and extrusion37,38 are subjective outcome measures, while implant and prosthesis movement are objective, and hence were used as the primary outcome measure in a randomized controlled trial by Shome et al.,30 who compared the differences in implant and prosthetic movement after myoconjunctival enucleation (with non-integrated PMMA implant) with those of two other standard techniques: the traditional muscle imbrication technique (with non-integrated PMMA implant) and enucleation with integrated porous polyethylene implant. They found that myoconjunctival PMMA implant movement was better than the traditional PMMA implant, and was similar to that of the porous polyethylene implant. Even more, prosthesis movement with the myoconjunctival PMMA implant was better than that with either the traditional PMMA or porous polyethylene implants.30

An important aspect of implant movement is the contraction of the rectus muscles. According to the Starling hypothesis,39 muscle contraction is compromised by undue stretching beyond its original length, and this is believed to have been responsible for the decreased implant movement after the traditional imbrication technique. This poor implant movement in turn leads to poor prosthesis movement because spherical implants impart movement to the prosthesis by providing a smooth pivotal surface over which the prosthesis glides passively. This probably accounted for the poorer prosthesis movement in the traditional PMMA group compared with the myoconjunctival technique, where each muscle is sutured to the respective fornix, thus avoiding stretching. One more reason for that difference is that the muscle imbrication over the anterior surface of the implant is associated with higher rate of implant displacement, while the deep orbital placement of the implant, the secure posterior Tenon’s capsule over it, and the suturing of the extraocular muscles to the fornices in the myoconjunctival PMMA implant technique might have helped implant centration better.26,29

The prosthesis movement associated with the myoconjunctival PMMA implant was better than with the integrated porous polyethylene implant. That is possibly because the attachment of the extraocular muscle to the fornices causes exaggerated deepening and shallowing of the fornices when the patient attempts to look in different directions, thereby causing further enhanced prosthesis movement.

Unfortunately, many complications are associated with integrated implants. Rates of exposure and postoperative inflammation of integrated HA implants range from 0% to 22%,15,30–44 while it is almost (0%) for silicone implants.45 Buettner and Bartley42 proposed that exposure of HA implants is related to the inflammatory reaction incited by the implant or by delayed fibrous ingrowth. Goldberg et al.46 suggested that use of HA implants, even with exposure, was less likely to lead to extrusion or infection compared with exposure with silicone or acrylic implants. Shields et al.47 described 100 cases of HA implants, among which they reported six patients with excessive postoperative orbital pain, two patients with wound edema, and one patient with erosion. In another report of 250 cases they described eight patients with conjunctival thinning, four patients with erosions, and one with orbital infection.48

ConclusionIn conclusion, orbital implants have been used for more than a century. Serious complications can occur, but they do so infrequently. Different surgical techniques were described in the literature; both the myoconjunctival enucleation technique (with non-integrated implant) and the integrated porous orbital implant technique result in better implant and prosthesis movement than the traditional muscle imbrication enucleation technique with a PMMA implant.

Yacoub A Youssef has nothing to declare in relation to this article. No funding was received in the publication of this article.

Blepharoptosis is a common complication following eye removal.1 Blepharoptosis in acquired anophthalmia can exacerbate a pre-existing sense of facial deformity and dissatisfaction.2 In many patients, a favourable cosmetic outcome can be achieved without further surgery. Augmentation of the superior aspect of the prosthesis can mechanically elevate or vault the upper eyelid. However, this may be limited by […] 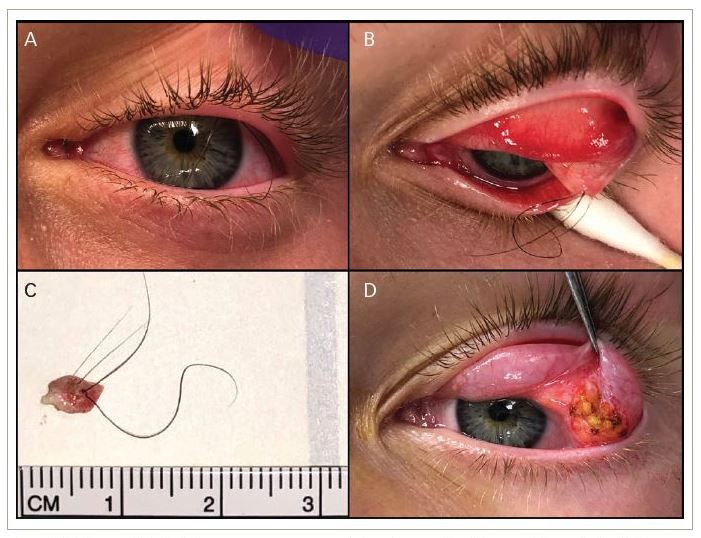 Trichofolliculoma of the Palpebral Conjunctiva: A Case Report

Trichofolliculoma is a rare, benign skin tumour arising from a hair follicle containing a large central cystic hair follicle with branching epithelial strands and buds.1–5 Trichofolliculomas typically affect the head and neck, appear flesh-coloured, dome-shaped, and may also have a tuft of hair emanating from a central pit.1–5 We report a case of a 15-year-old male with […]

Enucleation, or surgical removal of the entire eye globe, was described by Bartisch in 1583, and was described in combination with orbital volume replacement (implant) by Mules in 1585.1–3 In the US, trauma is the leading indication for enucleation (40.9% of cases), followed by tumors (28% of cases).4,5 Other indications include painful blind eye, phthisis […]