Purpose: To consider the effects of announcing the diagnosis of glaucoma and to record the patients’ knowledge of the disease. Methods: One hundred and twelve patients treated for primary open angle glaucoma answered some questions at a regular visit to their ophthalmologist. The questions recorded the patients’ reaction to the diagnosis and the information received. Patients have been studied by sex and age. Results are presented as frequencies and percentages. Differences were evaluated by means of Chi-square statistic or Fisher exact test. Results: Eighty-seven (77.7%) patients reported negative emotions after diagnosis: 41 (36.6%) were afraid of going blind and 31 (27.7%) experienced anxiety (younger patients more than older patients; p=0.048). Nearly half of the patients declared that they had modified their behaviour, indicating they took more care of their eyes (mainly young patients and women). Seventy-seven (68.7%) patients were satisfied with the information and care given, although only 26 (23.2%) cited inheritance and elevated intraocular pressure as causes of glaucoma. Many patients asked for more information on the causes, evolution and prevention of the disease. Younger patients (40; 93.0%) and women (52; 89.6%) asked more questions. Conclusion: Announcing a diagnosis of glaucoma is a fundamental step in the physician–patient relationship. This disease negatively influences quality of life due to its chronic nature: better patient-tailored information is necessary. Although age and sex influence the reactions to diagnosis and the satisfaction with the information and care given, most of the patients were satisfied with their eye specialists.

Glaucoma is a chronic disease that affects the optic nerve and it is often accompanied by an increase in intraocular pressure (IOP). The disease affects both men and women and is more common in those aged over 40 years. Glaucoma, if left untreated, can lead to an important reduction of vision and to blindness: the major risk factors for glaucoma blindness are the severity of the disease at the time of diagnosis (i.e. an altered visual field) and life expectancy.1

The most common form, primary open angle glaucoma (POAG), is subtle: the patient has no disorder, no symptoms and the diagnosis is occasional and usually given during a routine eye examination. The treatment of POAG involves, as a first approach, the prescription of eye drops to reduce and control IOP: these treatments are chronic. In general, only one eye drop is prescribed to obtain the optimal pressure but also to have the patient begin treatment; some patients may be prescribed more medications, with the eye drops being instilled multiple times per day. If the eye drops do not work, when the therapies become too complex or if an aggravation of the disease is observed or suspected, laser treatment or surgery can be performed (see Figure 1).

The choice of treatment depends not only on the IOP value but also on the changes in the visual field examination. Therefore, it often happens that a patient consulting an ophthalmologist, for example for difficulty reading, may at the end of the visit receive a diagnosis of a chronic disease that requires daily therapy and regular eye examinations (visual field, optical coherence tomography) two or three times per year.

The published literature has documented negative reactions to the diagnosis of glaucoma. Some authors have pointed out that the diagnosis of glaucoma generates anxiety in the subjects who receive it: on being told the diagnosis, the patient feels anxious about having to protect their vision, instilling eye drops for life and having to undergo frequent eye examinations.2–6 For these reasons, great importance is not only now placed on the patient’s perception of his/her illness and the prescribed therapies, and it is believed that the goal of glaucoma treatment is not only good control of IOP, but also ensuring the patient feels minimum discomfort and other side effects from the drugs prescribed.

Many generic and specific instruments are available to evaluate vision-related quality of life (QoL). Those used most frequently are the 25-item National Eye Institute Visual Function Questionnaire, which is vision specific, and the Glaucoma Symptom Scale, which is glaucoma specific.7–10 Using these, the ophthalmologist can perceive and quantify the problems of their patients.11 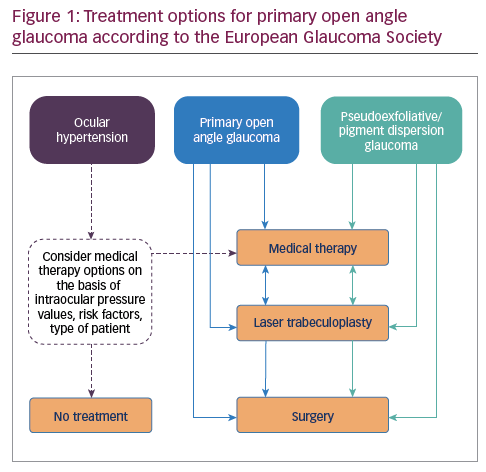 However, these measurement instruments have their limitations; the questionnaires do not help to evaluate aspects such as:

Some papers in the literature have addressed these questions.3,4 The aim of this study was to evaluate the patients’ satisfaction, feelings and needs on receiving a diagnosis of glaucoma, and uptake of information about this vision-threatening eye disease. Furthermore, the differences in patient satisfaction, if any, would be investigated by patient descriptors such as age, gender and level of education.

An observational study was carried out on consecutive patients suffering from early POAG. All participants were selected at the University Eye Clinic of Pavia, Pavia, Italy. The study was conducted in accordance with the Declaration of Helsinki and the appropriate International Conference on Harmonization guidelines. All patients gave their informed consent before taking part in the study.

Patients who fit the study’s inclusion criteria underwent a complete anamnestic and clinical evaluation, according to protocol. The study participants were given a survey questionnaire before a routine follow-up visit for glaucoma in the waiting room.

Data regarding school level, years since diagnosis, concomitant ocular and systemic diseases and number of medications prescribed were collected. All patients were asked about their reaction to the diagnosis and their knowledge of glaucoma causes and evolution. 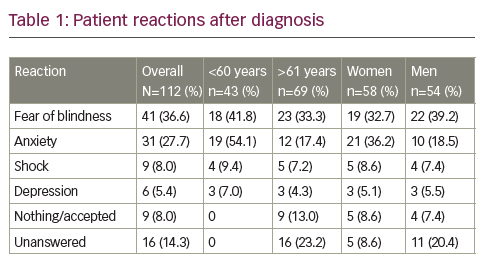 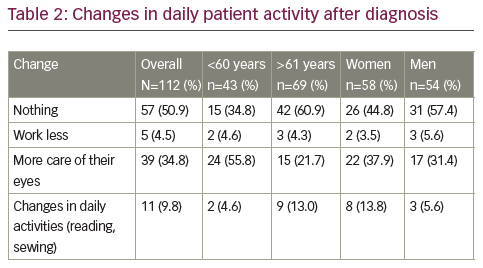 Results are presented as frequencies and percentages. Differences in frequencies were evaluated by means of Chi-square statistic or Fisher exact test, as appropriate. A p-value of less than 0.05 was considered to indicate statistical significance. All tests were two-sided. Analyses were performed with StatisticaTM for Windows software (StatSoft, Inc., Tulsa, OK, US).

After the diagnosis of glaucoma, 49.1% of patients changed something in their usual daily activities (Table 2). Overall, 34.8% took more care of their eyes – younger more than older (55.8% versus 21.7%, respectively; p=0.015) and women more than men (37.9% versus 31.4%, respectively). Among participants aged >60 years, 60.9% reported that they would not make any changes to their daily activity upon being diagnosed with glaucoma. This was also the case for 57.4% of male patients.

Sixty-nine patients (61.6%) stated they received information about glaucoma from their treating ophthalmologist, 77 (68.7%) said that they were satisfied with the information obtained, while 12 (10.7%) answered that they did not receive any information. Women and those younger than 60 years were more satisfied (Table 3). However, when interviewed with the open question ‘what is the cause of glaucoma?’, 86 (76.7%) patients answered ‘I don’t know’; 16 (14.3%) answered ‘intra-ocular pressure’; and 10 (8.9%) answered ‘it is inherited’. Men and women, old and young, answered similarly.

Finally, when interviewed, patients asked for more information about causes, evolution, prevention of the disease and to know ‘why’ therapy is carried out. Women and younger patients were more interested in obtaining more information (Table 4).

The centrality of the patient in the management of glaucoma is becoming increasingly important in the scientific community. Patients’ knowledge of the disease may improve adherence to therapy and therefore improve the stability of their visual field.12 However, there are some unanswered questions: what is the patients’ knowledge of the disease and reaction to diagnosis? 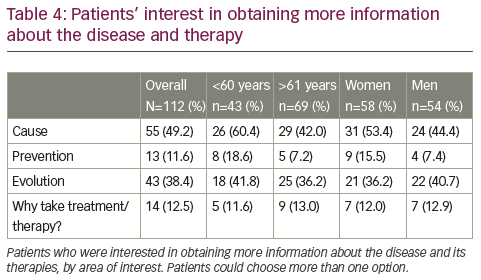 Traditional quality of life questionnaires do not examine these topics, which prompted us to investigate these questions. In terms of the reaction to diagnosis of glaucoma, our study found that there are some differences among patients in relation to age and gender. Patients aged less than 60 years reported negative feelings more frequently than those aged over 61 years; in particular they were afraid of blindness and developing anxiety. Some of the older patients simply accepted the diagnosis without expressing any negative sentiment and did not answer the question.5 Women reported both anxiety and fear of blindness, while men especially reported fear of becoming blind.6 The explanation of this could be linked to psychological differences between males and females, and to low levels of awareness about the disease. In fact, although most patients were satisfied with the information received, about 80% of all the patients in the study did not know any possible causes and consequences of glaucoma, and this could have influenced the reaction to the diagnosis. In particular, most (77; 68.7%) of the patients were completely satisfied with the information received, though some (26; 23.2%) cited heredity and elevated IOP as causes of glaucoma. It is probable that this discrepancy could be linked to a poor doctor–patient relationship due to different circumstances, but also to the short time available for eye examinations during a routine visit. Patients said they learned information on glaucoma from their ophthalmologist, but one respondent documented learning information on the disease through other sources, for example the internet. However, all the patients asked for more information about the disease and women and those younger than 60 years were more interested in learning about the prevention, evolution and causes of glaucoma.

Increased knowledge of glaucoma could help patients to better manage their disease. Therefore, more time should be spent on informing patients and adapting the information provided to the patient’s demographic characteristics (e.g. sex, age and level of education). Patient education should be repeated to maintain a useful effect.

Although the number of patients included in this survey was rather small, we believe that an adequate knowledge of the disease could help patients to react differently to the diagnosis. By adhering to both therapy and follow-up examinations, patients could guarantee good quality of life and lifelong vision for themselves.

Gemma Caterina Maria Rossi has
nothing to declare in relation to this article.

All named authors meet the criteria of
the International Committee of Medical Journal Editors
for authorship for this manuscript, take responsibility
for the integrity of the work as a whole and have
given final approval for the version to be published.

This article is published under the
Creative Commons Attribution Noncommercial
License, which permits any non-commercial
use, distribution, adaptation and reproduction
provided the original author(s) and source are
given appropriate credit. © The Authors 2018.

The author would like to
acknowledge Dr Luigia Scudeller, who performed
the statistical analysis for this Brief Report.