Purpose: To present the diagnosis and management of the youngest-described keratoconus patient, despite the absence of any systemic or local risk factors except the presence of a strongly positive family history of keratoconus. Methods: A retrospective case report. Results: A 4-year-old female child with free past medical and ocular histories, and a strongly positive family history of keratoconus, presented with deterioration in her vision in the previous 6 months as observed by the family. Objective/subjective refraction showed high astigmatism. Corneal tomography using the Scheimpflug camera Pentacam® HR confirmed the diagnosis of keratoconus in both eyes. Conventional corneal collagen crosslinking (CXL) procedure was performed shortly with a stabilization effect observed over a 1-year follow up period. Conclusion: Keratoconus onset may occur in early childhood, especially in patients with strong family history of the disease even in the absence of systemic or ocular risk factors. So, early screening before the age of 4 years should be done for all children of a family history of keratoconus. Crosslinking may be an effective and safe procedure for very young patients diagnosed with keratoconus.

Keratoconus is an ectatic corneal disorder characterized by a change in the organization and structure of the cornea. It is usually progressive and bilateral but asymmetrical. Keratoconus usually manifests during adolescence and early adulthood.1

Riboflavin-ultraviolet-A (UVA) cross-linking (CXL) is a technique introduced in the past decade for the treatment of progressive keratectasia and keratoconus.2 Several clinical studies have demonstrated that CXL effectively slows keratoconus progression in adult eyes. Recently, CXL has been recommended as an optimal intervention for progressive keratoconus affecting the pediatric population, bearing in mind that pediatric keratoconus has more debilitating progression compared to adult onset type.3–5

A 4-year-old female child visited our ophthalmology clinic for a check-up. Her past medical history was unremarkable. She did not have atopy, seasonal allergy, asthma or any connective tissue disease. Her ocular history was also negative for eye trauma, eye rubbing or other ocular risk factors for keratoconus. Her family history was strongly positive for keratoconus; her father, uncle and grandfather were all known cases of keratoconus who were diagnosed in their third decade of life and needed multiple penetrating keratoplasty procedures. In addition, her only brother has high myopic astigmatism and he was on regular follow-up in our clinic. The patient was presented to our cornea and refractive surgery clinic by her parents after they noticed that she had difficulties in recognizing distant objects over the previous 6 months. Slit lamp examination was normal without visible signs of keratoconus or other signs related to connective tissue diseases such as blue sclera. Her cycloplegic refraction was + 1.5 -5.00 x 8 for her right eye and + 1.5 -4.5 x 167 for her left eye. Uncorrected distance visual acuity (UCDVA) was 0.2 oculus uterque (OU) (Snellen chart, decimal), the best corrected distance visual acuity (BCDVA) was 0.4 OU.

Corneal tomography using the Scheimpflug camera Pentacam® HR (OCULUS Optikgeräte GmbH, Wetzlar, Germany) was performed and showed high keratometric readings (right eye maximum keratometric reading [Kmax]: 50.5 diopters [D]; left eye: 49.4 D), thin corneas (thickness at the thinnest location was 375 µm in her right eye and 349 µm in her left eye), and abnormal tongue-like expansions on the elevation maps were also noticed (Figures 1 and 2). Based on these findings, keratoconus was diagnosed. The patient was also referred to the pediatrician for further genetic screening and his report was negative for any systemic or genetic disease.

A discussion was had with the family about the risks and benefits of corneal collagen CXL for treating progressive keratoconus, especially in this age group where not enough data in the literature is available for its use in ages younger than 7 years. The family agreed, and a written informed consent was obtained for the procedure after explaining to them its possible risks, side effects and the possible need for another session. Bilateral conventional collagen CXL procedure according to Wollensak et al. was performed under general anesthesia.8 It involved removing the central 9 mm of the epithelium with a corneal brush (corneal white to white distance was 11.3 mm). A hypotonic riboflavin solution (PESCHKE® H, Peschke Trade GmbH, Hünenberg, Switzerland) was applied to the corneal surface every 3 minutes for 30 minutes before irradiation to restore the corneal thickness from about 340 μm directly after epithelial layer removal to >400 μm. Irradiation with UVA of 370 nm and 5.4 J/cm2 was applied for 30 minutes (VEGA CBM-X-Linker, C.S.O. Srl, Florence, Italy). Bandage contact lenses were placed for 5 days and then removed after complete corneal epithelial healing was observed. Gatifloxacin/dexamethasone eye drops were used for 1 week in addition to lubricant eye drops. Then fluorometholone 0.1% was used four times daily and tapered over 4 weeks. The patient was followed-up at regular intervals; grade 1–2 corneal haze was noticed at the 1-week visit and faded gradually in the following visits (a minimal grade 1 subepithelial haze was noticed at the 1-year follow up visit). Three months later, the UCDVA improved to 0.4 in her right eye and was stable in her left eye. Subjective refraction was: right eye + 0.75 -3.50 x 15, visual acuity (VA): 0.5; left eye + 0.75 -3.75 x 170, VA: 0.5. Temporary glasses were given to the patient.

The 6-month follow-up showed improvement of VA for both eyes to 0.6 using the same refraction/glasses as previous. The 12-month follow up visit also showed the same previous BCDVA (Table 1).

Corneal tomography using the Scheimpflug camera Pentacam HR was done at the 1-year follow-up visit and showed stabilization of her condition with an improvement of Kmax, flat keratometry and steep keratometry (Figures 3 and 4). There was a drop in the corneal thickness measured by Pentacam, but the values measured by ultrasonic pachymetry showed stable corneal thickness, which is considered more accurate than Pentacam in cases of corneal haze (Table 1). No other complications were seen during the 1-year follow up visit.

Keratoconus can present in early childhood. Some of the ocular risk factors associated with keratoconus include corneal injury, eye rubbing, vernal keratoconjunctivitis, retinitis pigmentosa or rigid gas permeable contact lens usage. Some systemic associations include Down syndrome, non-inflammatory connective tissue diseases (such as Ehlers-Danlos syndrome and Marfan syndrome), and mitral valve prolapse. Several genes were investigated including those coding collagen and proteinase inhibitors for the suspicion of a genetic base of keratoconus. Although the most common type of keratoconus is sporadic, many studies have reported the presence of large number of familial keratoconus – the rate ranges from 5.0–27.9%.1,9 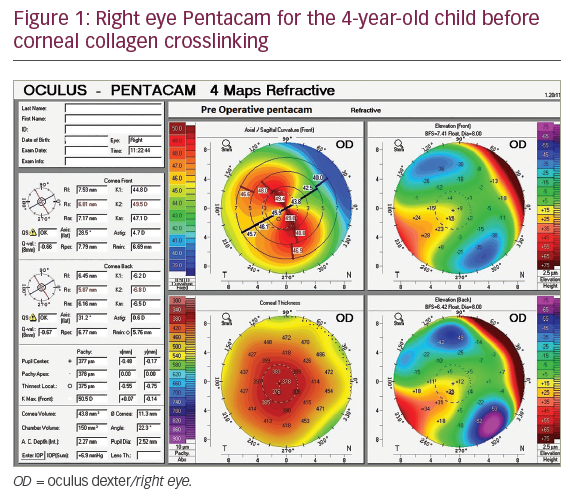 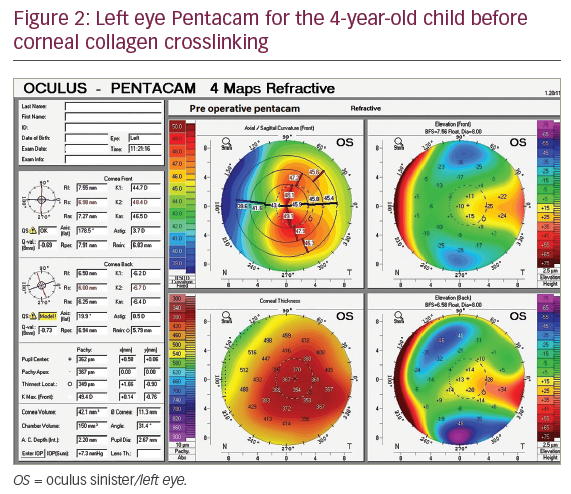 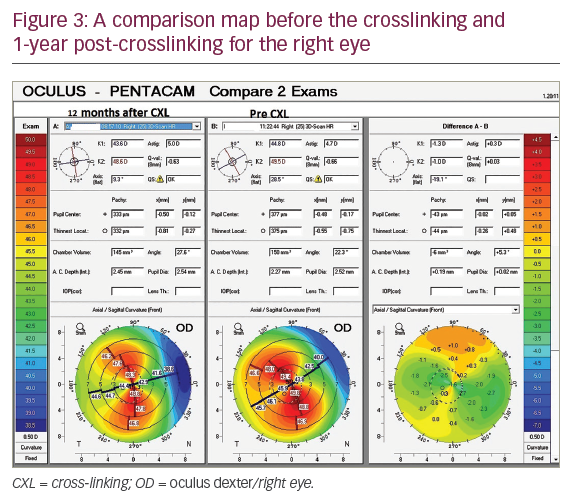 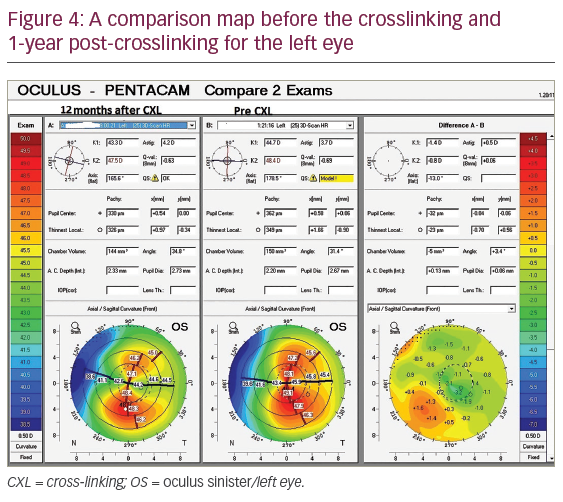 There were no ocular or systemic diseases or factors associated with keratoconus in our patient, as the pediatrician’s evaluation showed the patient was totally normal, with no manifestations of any systemic or genetic disease. Unfortunately, advanced genetic tests were unavailable. Several loci have been mapped within families with keratoconus and many studies imply that the disease follows a multifactorial model of transmission, whereas familial keratoconus for the majority follows an autosomal dominant model of inheritance, which we believe is the mode of inheritance in our patient.9,12 The decision was to proceed for conventional CXL, despite the lack of studies on CXL in patients younger than 7 years. On the other hand, long term efficacy may decline over years and there may be a need for additional CXL procedures. In other words, the achieved corneal stromal stiffening effect after CXL in pediatric patients which halts the progression of keratoconus is transient and may wear off 6–7 years after CXL treatment. This suggests that young patients with keratoconus should be followed closely even after CXL treatment (at least once or twice a year) and be treated again in case of keratoconus reactivation.13

In conclusion, keratoconus onset may occur in early childhood, especially in patients with a family history of the disease, even in the absence of systemic or ocular risk factors. So, early screening before the age of 4 years should be done for all children with a family history of keratoconus. Cross-linking may be an effective and safe procedure for very young patients diagnosed with keratoconus, but general anesthesia is usually required.

Mohammad M Shehadeh, Mohammad
T Akkawi, and Ammar A Aghbar have nothing
to declare in relation to this article.
Compliance with Ethics: All procedures were followed
in accordance with the responsible committee on human
experimentation and with the Helsinki Declaration of
1975 and subsequent revisions. Informed consent was
received from the patient involved in this case study.
Authorship: All named authors meet the criteria of
the International Committee of Medical Journal Editors
for authorship for this manuscript, take responsibility
for the integrity of the work as a whole and have
given final approval for the version to be published.

This article is published
under the Creative Commons Attribution Noncommercial
License, which permits any non-commercial
use, distribution, adaptation and reproduction
provided the original author(s) and source are
given appropriate credit. © The Authors 2018.
Review Process: Double-blind peer review.

touchREVIEWS in Ophthalmology. 2022;16(1):Online ahead of journal publication

Keratoconus: A Review of Medical and Surgical Options

Keratoconus is the most common primary progressive ectatic condition of the cornea. It is classically described as non-inflammatory, distinguishing it from several other pathologies associated with corneal thinning. Prevalence of this disease varies depending on geographical location, with reports as high as 2.3% in Central India to 0.3% in Russia.1,2 Keratoconus typically presents as a bilateral […]