Case Report A 24-year-old man without known previous medical illnesses; his past ocular history included left eye penetrating corneal trauma, treated with a rotational flap 7 years prior to presentation. The patient was treated for 2 weeks as a case of herpetic keratitis in a private clinic with oral acyclovir 800 mg five times daily, gatifloxacin 0.3% eye drops (E/D) every 2 hours (q2h) and atropine E/D q12h. There was no response to treatment and so was referred to our cornea clinic for further management.

On examination, the patient visual acuity (VA) was 1.0 OD, hand motion OS. Slit lamp examination revealed normal right eye, while a left eye examination showed purulent discharge, severely injected conjunctiva, central corneal abscess, corneal neovascularisation and 1 mm hypopyon. Lens and posterior segment were invisible, so B-scan ultrasonography was performed and revealed a clear vitreous with no signs of posterior segment involvement. His intraocular pressure (IOP) felt soft to touch. Corneal scraping was done and the specimen sent for Gram stain, Giemsa stain, culture and sensitivity. Acyclovir was discontinued because it was not a picture of herpetic keratitis and the history was free of previous herpetic eye disease. The patient was started on empirical treatment with fortified vancomycin 50 mg/mL q2h, fortified gentamicin 14 mg/mL q2h, resumed gatifloxacin E/D q6h and atropine q8h. Four days later the patient was re-examined; he was clinically improved with less eye pain, resolved hypopyon and better left eye VA (counting finger 50 cm). Culture and stain were negative. However, because of the clinical improvement the same regimen was continued.

The patient was followed-up regularly afterwards. Full resolution of the abscess was noticed at the fourth week, but corneal clouding and extensive neovascularisation were present. The medications were discontinued and the patient started on lubricants only with regular follow-up. 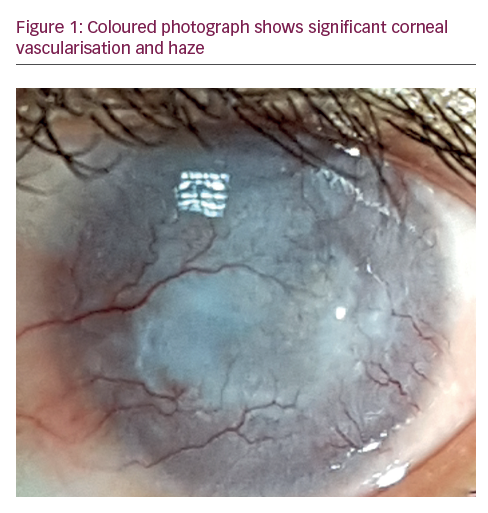 The collagen CXL procedure, and the regression of some mild cases of corneal neovascularisation unintentionally observed in our cornea clinic after CXL procedure for other indications, was also discussed with him. He agreed and consented to undergo the procedure trial after being informed about the possible risks and side effects.

Standard collagen CXL procedure according to Wollensak et al.3 was performed. It involved anaesthetising the eye (with proxymetacaine hydrochloride 0.5% drops), removing the central 8–10 mm of the epithelium with a corneal brush and applying a riboflavin solution (0.1% riboflavin-5-phosphate and 20% dextran T-500) to the corneal surface 30 minutes before irradiation and at 5-minute intervals during the course of a 30-minute exposure to 370 nm UVA with an irradiance of 3 mW/cm2. Bandage contact lens was placed for 5 days, and removed after observing the healing of the corneal epithelium. Gatifloxacin and dexamethasone E/D were administered for 1 week in addition to lubricant E/D.

One month later, the patient’s vision improved to 0.05 OS and there was a dramatic improvement of the corneal neovascularisation (Figure 2). Three months post-CXL, vision improved to 0.3. VA and was 0.4 after the following 3 months with good patient satisfaction. One year later there was insignificant corneal vascularisation, a clearer cornea and the VA was 0.4 (Figure 3).

Discussion Bevacizumab is a full-length, humanised murine monoclonal antibody that recognises all isoforms of vascular endothelial growth factor (VEGF). It is the first choice antiangiogenic therapy due to its availability and relatively low cost, with demonstrable efficacy when administered 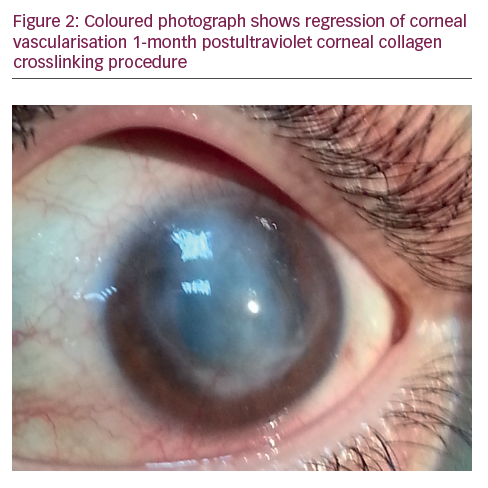 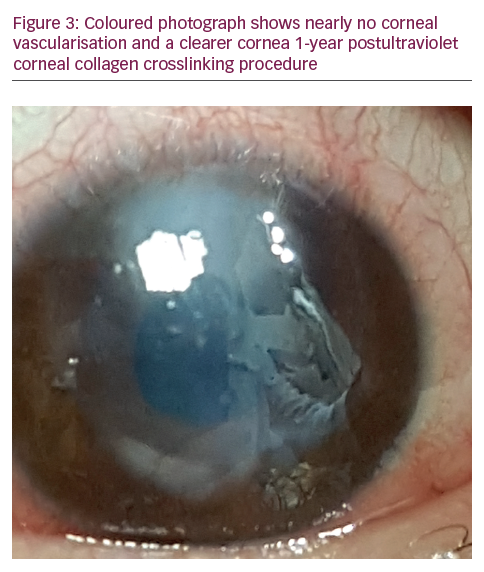 Activation of riboflavin into triplet by UVA produces a reactive oxygen species (ROS) that reacts with the collagen fibres of the corneal stroma and results in forming new chemical bonds between its amino group that play the important rule in corneal mechanical strength enhancement.6

In psoriatic skin, local and systemic elevation of angiogenic cytokines including VEGF were observed, with fluctuation in line with disease activity.7 Treatments for psoriasis include psoralen and ultraviolet A (PUVA), and have been shown to inhibit angiogenesis and reduce levels of VEGF as part of their therapeutic effect.8 In vitro studies demonstrate that photochemotherapy with psoralen and UVA suppresses VEGF expression, inhibits angiogenesis and induces apoptosis of human endothelial cells.9 Vascular pathophysiological remodelling can be induced by excessive production of ROS or reducing its removal. These may include modification of the vascular wall, cytoskeletal structures, cellular attachments, composition of the extracellular matrix or apoptosis. ROS effects on apoptosis and vascular smooth muscle cells vary depending on the type and concentration of ROS and the amount of time the cell is exposed to the oxidant.10

We believe that corneal vascularisation regressed in our case due to the direct toxic effect of ultraviolet light on the vessels and indirectly by ROS. However, UVA may have exerted some antiangiogenic effect on the corneal blood vessels as in the case of psoriatic skin. In conclusion, corneal collagen CXL could be a promising procedure to treat certain cases of extensive corneal neovascularisation; however, more studies should be conducted to determine that the categories that would benefit from this approach and to assess its long-term safety.

Mohammad M Shehadeh, Mohammad T
Akkawi, Vasilios F Diakonis, Ammar A Aghbar and
Abdelraheem Abu Shanab have nothing to declare in
relation to this article. No funding was received in the
publication of this article. The authors have no financial or
proprietary interest in any materials or methods
described herein.

This article is published under the
Creative Commons Attribution Noncommercial License,
which permits any non-commercial use, distribution,
adaptation and reproduction provided the original
author(s) and source are given appropriate credit.