Spectral domain optical coherence tomography (SD-OCT) is a non-invasive imaging method which is used in the diagnosis and followup of various macular diseases. SD-OCT provides detailed imaging of the retina. However, it has also been used to evaluate the choroidal layers. There are many publications on the OCT terminology, the definition and classification of retinal and choroidal structures including lines, bands and zones described in OCT. The aim of this review is to provide an overview of the literature on the past and present terminology for the retinal and choroidal structures seen in SD-OCT. To know OCT terminology will provide to be understanding better the pathogenesis of these diseases and the effects of therapeutic applications for these.

Spectral domain optical coherence tomography (SD-OCT) is a very useful non-invasive imaging method which is used in the diagnosis and follow-up of various retinal and choroidal diseases involving macular region.1–3 In 2014, at International Nomenclature OCT (INOCT) Panel, Staurenghi et al.4 proposed a nomenclature system for normal anatomic landmarks in SD-OCT and it has been reached a consensus regarding the most proper terminology and normal anatomic landmarks in the posterior segment SD-OCT. In addition, it has been recommended as the standardised nomenclature for use in the future publication in the panel. Currently, this terminology has been commonly used by some ophthalmologists, especially retina specialists.4

In this review, based on the literature, it has been aimed to provide an overview of the definition and classification of the retinal and choroidal structures seen in SD-OCT, and to propose the standard nomenclature and terminology for these structures.

To know the INOCT, OCT terminology and nomenclature of retinal and choroidal layers, the landmarks, zones, bands and lines described in OCT in healthy eyes will also provide to be understanding better the pathogenesis of various macular diseases and the effects of therapeutic applications for these.

The external limiting membrane (ELM) (INOCT, Zone 9) is located at the boundary between the nuclei and the inner segments (ISs) of the photoreceptors and corresponds to the multiple junctional complexes between Müller cells and the photoreceptors.4–7

The outer (dendritic) plexiform layer (OPL) (INOCT, Zone 7) is the hyper-reflective layer that corresponds with the synapses between cone pedicles and rod spherules with dendrites of horizontal and bipolar cells.4–7 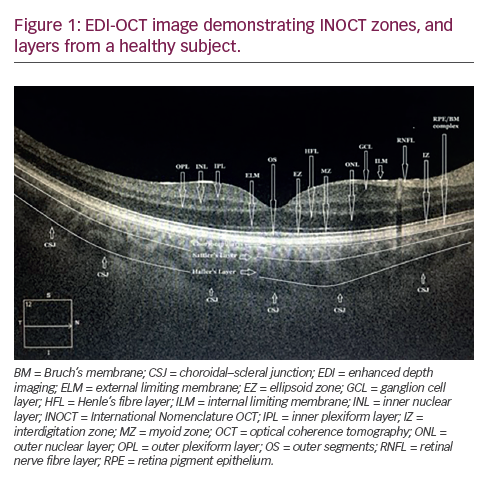 The outer nuclear layer (ONL) and HFL (INOCT, Zone 8) is the hyporeflective zone between ELM and the OPL was previously attributed to the ONL.3,4,8–12 HFL, composed of the axons of photoreceptors can be seen to contribute to the inner region of Zone 8. HFL is not present in the mid-peripheral/peripheral retina. HFL is exactly a part of the OPL which is observed as hyper-reflective in OCT. However, it seems hypo-reflective because the fibres in HFL obliquely course in retinal structure. Thus, ONL is observed thicker than actual. In addition, recent studies showed that HFL could be seen as hyper-reflective zone if the beam of OCT can be directed to the retina.4,13,14

The MZ (INOCT, Zone 10) is the hypo-reflective region and located between ELM and EZ, and it is close to the ELM. However, MZ has not been recognised as a distinct OCT retinal layer in the literature. MZ includes ribosomes, endoplasmic reticulum, Golgi bodies and rare mitochondria. It has been considered that this zone is corresponding to the myoid portion of the ISs of photoreceptors and that the hyporeflectivity of MZ is due to the lower packing density of mitochondria in this zone compared to the EZ.4–7,10–12

The photoreceptor integrity line is the prominent bright band anterior to (or above) the RPE. This line was previously known as the connecting cilia, the junction of the ISs and OSs, and the IS ellipsoid.21,22

The IZ (INOCT, Zone 13) is considered that it reflects the interdigitation of the apical processes of the RPE cells that encase part of OSs of the photoreceptors. It was previously called the cone OS tips and rod OS tips, and its differentiation from RPE layer is difficult for even healthy subjects. IZ lies anterior to the RPE complex and thus has been proposed to represent OS tips as its anatomic correlate. In the past, IZ has been attributed to Verhoeff’s membrane. However, this nomenclature does not seem to be appropriate because the Verhoeff’s membrane is not a true membrane and it is just an electron microscopy (EM) image corresponding to the band of the tight junction complexes. In addition, it was considered that IZ could not be equal to Verhoeff’s membrane because IZ is located on the RPE layer.4–7,23,24

Verhoeff’s membrane is an anatomical structure that surrounds the RPE cells, and it is also known as the tight junctional complexes between the RPE cells; it seems as a band on EM and it is sometimes called cone photoreceptor OS tips.23,24

The RPE/BM complex (INOCT, Zone 14) can be seen as two distinctive hyper-reflective bands separated by a hypo-reflective zone in highresolution images of SD-OCT. It was previously called single RPE line/ band. International nomenclature group agreed that these bands correspond with the RPE and the BM. In the past, this complex was also called RPE/BM/choriocapillaris (CC) complex. RPE/BM complex is thicker in the fovea compared to other retinal regions.3,4,9–15,25

The CC (INOCT, Zone 15) can seem as a thin layer of moderate reflectivity attributed to feeding arterioles to and draining venules from the CC in the inner choroid immediately below the RPE/BM complex. However, exact identification of these layers by current OCT devices in normal eyes is difficult.3,4,9–15,25

Sattler’s layer (INOCT, Zone 16) is the thick layer of round- or oval-shaped hyper-reflective profiles with hypo-reflective cores corresponding to the small- or medium-sized oval vasculature to the Sattler’s layer in midchoroid in SD-OCT scans.3,4,9–15,25

Haller’s layer (INOCT, Zone 17) is the thick layer of oval-shaped hyperreflective profiles with hypo-reflective cores in outer choroid corresponding to the larger outer oval vasculature to the Haller’s layer.3,4,9–15,25

Choroidal–scleral junction (INOCT, Zone 18) may clearly be observed only with enhanced depth imaging mode of SD-OCT or swept source OCT. It is the zone at the outer choroid with a marked change in texture in which large circular or ovoid structures corresponding to the homogeneous region with variable reflectivity. The interest on the measurement of the choroidal thickness has been increased in recent years because it can be affected by various chorioretinal diseases. The clear detection and marking of this junction is very important for the correct measurement of choroidal thickness.3,4,25

In addition to the above-mentioned zones, in INOCT, Zone 2 attributes to the pre-retinal space; Zone 6 reflects the inner nuclear layer. Zone 12 reflects the OSs of the photoreceptors. Pre-retinal space can be observed as a hypo-reflective zone immediately above the ILM in the high-resolution OCT images in some healthy subjects.4

In conclusion, to use the standardised and proper OCT terms in current OCT terminology might provide standardisation in the definition of important pathologies and to understand better the pathogenesis and the effects of therapeutic applications for various macular diseases.

Burak Turgut has nothing to disclose with
any trade or device in relation to this article. No funding
was received for the publication of this article. This study
involves a review of the literature and did not involve any
studies with human or animal subjects performed by any
of the authors.

This article is published under the
Creative Commons Attribution Noncommercial License,
which permits any non-commercial use, distribution,
adaptation and reproduction provided the original
author(s) and source are given appropriate credit.