Peripheral visual field constriction and night blindness are the main features of retinitis pigmentosa (RP). However, central vision is often impaired dramatically even in the early stages of the disease when macular complications such as cystoid macular oedema (CME) occur. The pathogenesis of RP-related CME is still not well explained. Therefore, several treatment alternatives such as topical, oral and systemic pharmacotherapy; laser photocoagulation and even vitreoretinal surgery are employed by the clinicians. In this review, we summarise the clinical data on intravitreal pharmacotherapeutic agents and focus mainly on the steroids and anti-vascular endothelial growth factor agents.

Retinitis pigmentosa (RP) is an inherited retinal dystrophy characterised with the progressive loss of photoreceptors.1,2 Night blindness together with the peripheral visual field loss is the most prominent clinical feature.1,2 Central vision is relatively spared up to the later stages of the disease process.3 However, when macular complications such as macular oedema arise, central vision is often dramatically impaired even in the early stages of the disease. The prevalence of cystoid macular oedema (CME) is reported to be 10–20% in the eyes of patients with RP.4,5

Fishman et al.6 examined 15 RP patients with vitreous fluorophotometry. All patients showed abnormally high concentrations of fluorescein within the vitreous which was a sign of BRB abnormality. Larsen et al.7 demonstrated that BRB leakage was markedly increased in six RP patients with the help of ocular spectrofluorophotometry. Vinores et al.9 investigated the immunohistochemical staining for albumin on paraffin sections of 22 normal and 29 RP eyes. Electron microscopic immunocytochemical staining for albumin was performed on additional six normal and nine RP-affected eyes. Two-thirds of the eyes with RP demonstrated extravascular albumin in the inner portion of the posterior retina. This was evident even in the absence of CME but eyes with CME showed extensive BRB failure. Küchle et al.10 analysed the BRB in patients with RP with a laser cell photometer in 56 eyes of 29 patients and found that aqueous flare values were higher in patients with RP than in controls; moreover, patients with RP-related CME had even higher values with a mean of 14.66 photon counts per millisecond compared with 9.65 for patients with RP but having no CME. RPE seems to lose polarised apical distribution in association with macular oedema and RP and cannot effectively pump out ions and fluid from the outer retina.11

Autoimmune processes and/or inflammation can be deemed as the hallmark of RP-related CME. Spalton et al.12 examined 25 patients with RP and all patients had an excessive number of vitreous cells; six even had exudates in the pre-equatorial fundus indistinguishable from pars planitis. They suggested that this might be a general response noticed in many types of tapetoretinal degeneration in reaction to actually degenerating photoreceptors or RPE. Furthermore, Heckenlively et al.13 looked for the presence of antiretinal antibodies in a group of 30 consecutive patients with CME and RP, 30 consecutive patients with RP but without CME and 50 normal subjects. Twenty-seven (90%) of the patients with RP and CME had antiretinal protein antibody activity compared with three of 50 normal subjects (6%) and only four of 30 patients (13%) with RP but without coexistent CME. 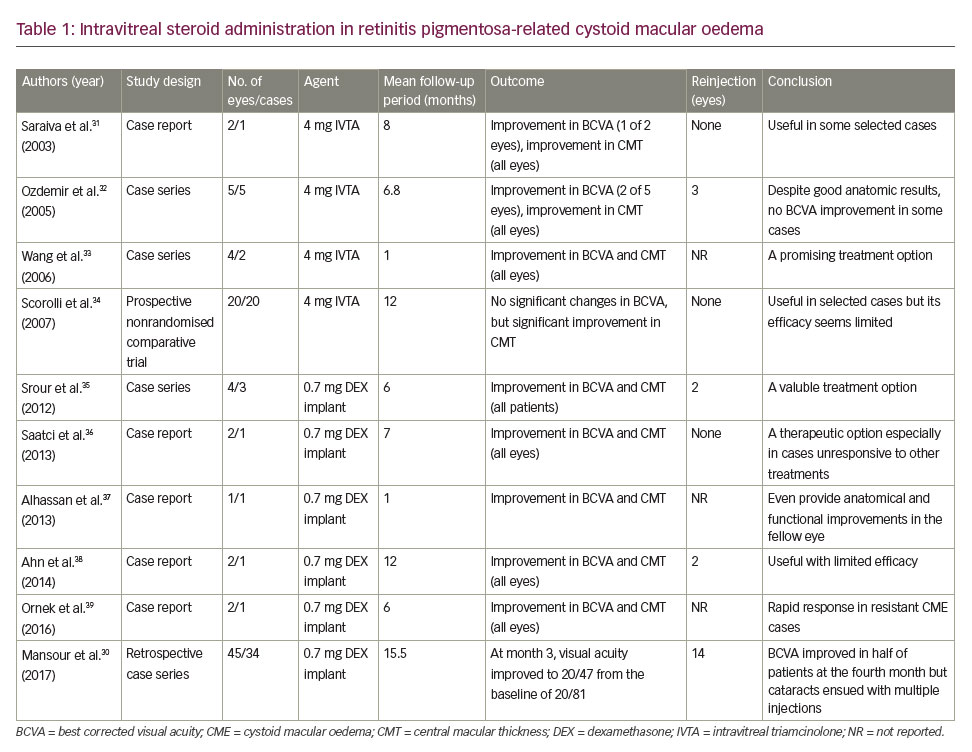 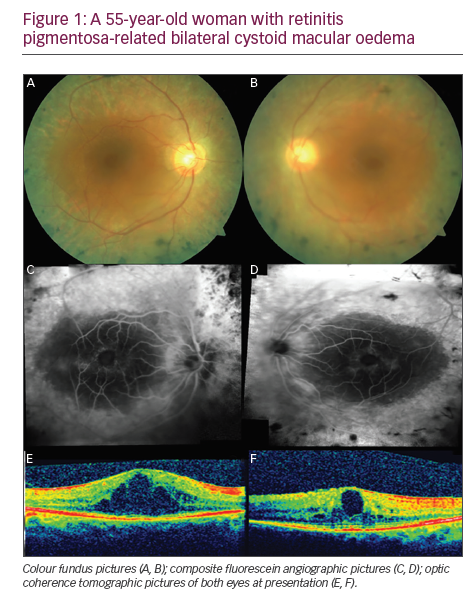 anterior vitreous cavity. A strong inflammatory reaction with ‘2+’ cells (10–30 cells per field) was associated with younger age. The levels of various proinflammatory cytokines and chemokines including monocyte chemotactic protein-1 were increased both in the aqueous humour and vitreous fluid of RP patients compared with the levels in control patients.14 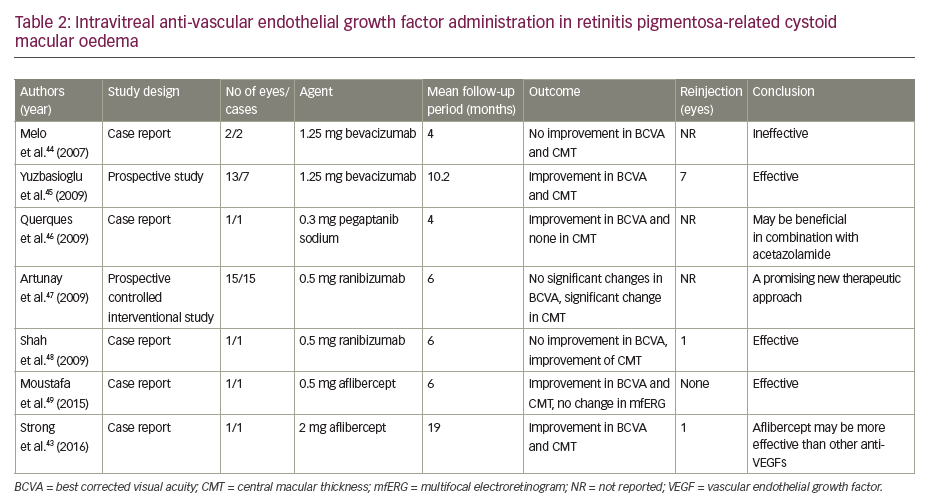 Intravitreal steroids
Steroids exert their effect via several mechanisms such as reduction in synthesis and release of proinflammatory cytokines, suppression of the production and migration of inflammatory cells, and suppression of the autoimmune process and restoration of the integrity of BRB.26–30 The previous reports on intravitreal steroid administration in eyes with RP-related CME30–39 are summarised in Table 1. The treatment effect of dexamethasone implant can be seen in a case with bilateral RP-related CME (Figures 1 and 2).

The most important drawbacks in the use of intravitreal steroids in RP-related CME are temporary drug effect and risk of ocular hypertension and cataract formation especially with consecutive injections.30

Salom et al.42 quantified the VEGF-A levels in aqueous humour of 16 eyes of 16 patients with RP. They found that aqueous VEGF-A levels were markedly lower in eyes with RP than in control patients. Strong et al.43 hypothesised that a localised VEGF production under pathologic conditions, for example by Muller cells, may contribute to CME formation in RP patients and this fact may also be the reason for the rarity of peripheral neovascularisation in eyes with RP. The previous reports on intravitreal anti-VEGF agent administered in eyes with RP-related CME43–49 are summarised in Table 2. 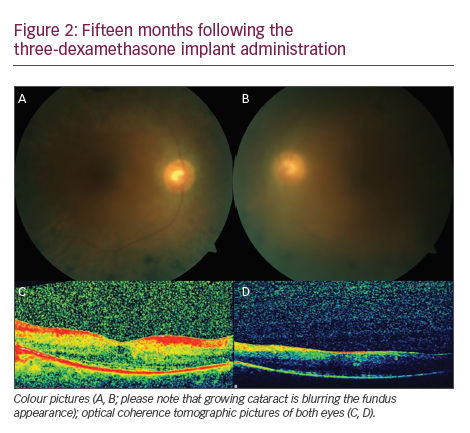 resolution of CME 7 days after the injection. This effect lasted for a month. Visual acuity was improved to 20/50 from 20/32. Macular sensitivity measured by the microperimetry was also improved. Authors speculated that auto-BMHSCT might restore the BRB via its paracrine effects and thereby provided the resolution of the oedema.

Comments There is yet no proven treatment for RP-related CME and no randomised controlled studies with a sufficient number of patients have been performed. Intravitreal steroids and anti-VEGF agents are reported to have some effect on RP-related CME but the durability of treatment effect and the selection of agent (anti-VEGF or steroids) are highly controversial. Thereby, we intend to review the current status of the intravitreal pharmacotherapy in the treatment of RP-related CME and share some of the latest data with the ophthalmic community.

Oya Donmez and Ali Osman Saatci have
nothing to disclose in relation to this article. No funding
was received for the publication of this article. This study
involves a review of the literature and did not involve any
studies with human or animal subjects performed by any
of the authors.

This article is published under the
Creative Commons Attribution Noncommercial License,
which permits any non-commercial use, distribution,
adaptation, and reproduction provided the original
author(s) and source are given appropriate credit.