A 52-year-old woman with diabetes was examined for acute visual loss and ocular pain in oculus dexter (OD). Two weeks earlier, a nephrostomy catheter was inserted for the treatment of nephrolithiasis and 10 days after this procedure she suffered an acute myocardial infarction. During hospitalisation, she developed a high fever and Klebsiella pneumoniae was detected in the blood cultures. On eye examination, mild corneal oedema, minimal hypopyon, vitritis and subretinal abscess of 3DD size at the uppertemporal retina were noted in the right eye. Single intravitreal injection of vancomycin, ceftazidime and clindamycin was given in addition to systemic antibiotic treatment for 14 days. Intraocular inflammation resolved rapidly within days and she regained a visual acuity of 8/10 with a residual chorioretinal scar 2 months later. Endogenous endophthalmitis can be treated successfuly if the diagnosis can be established early enough and treated accordingly.

Endogenous endophthalmitis is a rare inflammatory condition of the intraocular cavity that is caused by the haematogenous spread of bacterial and/or fungal agents from the distant infectious loci mostly located in liver, lung, endocardium, meninges and urinary tract.1,2 It is commonly associated with an underlying immunosuppressive status including diabetes mellitus, cardiac disease, renal insufficiency and malignancy. Gram-negative bacteriae are relatively more frequent than Gram-positive bacteriae, particularly in Asia.3

A 52-year-old woman with 20 years history of poorly controlled diabetes experienced acute visual loss and ocular pain in her right eye. Two weeks earlier a nephrostomy catheter was inserted for the treatment of nephrolithiasis. Ten days after this procedure she suffered an acute myocardial infarction and was hospitalised. Three days after the hospitalisation she developed the above-mentioned ocular symptoms in her right eye in association with high fever. She also had herpes labialis for 2 days. On eye examination, best-corrected visual acuity was 1/10 in oculus dexter (OD) and 20/20 in oculus sinister (OS). Slit-lamp examination showed mild corneal oedema, +++ cells, minimal hypopyon and mild to moderate vitritis in OD. The anterior segment was unremarkable in OS. Intraocular pressure was within normal limit oculus uterque (OU). Fundoscopy revealed a subretinal abscess of almost 3DD at the uppertemporal retina in OD and a few cotton-wool spots at the posterior pole in OS (see Figure 1). Blood cultures already demonstrated K. pneumoniae. Our diagnosis was unilateral K. pneumoniae endophthalmitis (KPEE). She was treated with a single intravitreal injection of vancomycin + ceftazidime and clindamycin in association with the systemic antibiotics (gentamicin + daptomycin and acyclovir) for 14 days. Vitreous culture turned out to be negative. Topical cyclopentolate and prednisolone acetate drops were also administered.

Among inpatients with haematogenous infection, the overall incidence of presumed endogenous endophthalmitis was 0.04 % among patients with bacteraemia.4 In a recent review of 342 cases of endogenous bacterial endophthalmitis reported between 1986 and 2012 predisposing conditions were present in 60 % of cases.2 The median final visual acuity was 20/100 with 44 % of eyes achieving visual acuity worse than 20/200. Among all cases, 24 % required evisceration or enucleation and the mortality was 4 %. The most common causative Gram-negative bacteria were K. pneumonia, Pseudomonas aeruginosa and Neisseria meningitidis and the most common causative Grampositive bacteria were Staphylococcus aureus, group B Streptococcus, Streptococcus pneumoniae and Nocardia species, respectively. 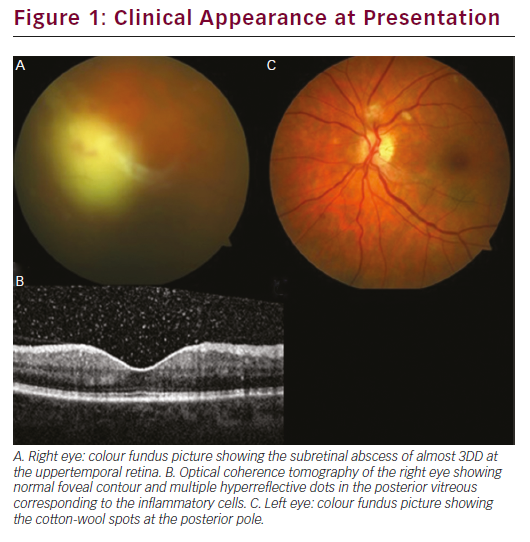 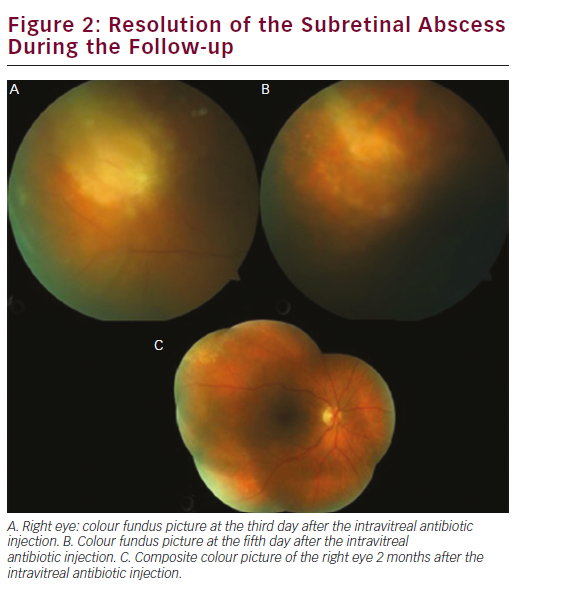 Visual outcome following endogenous bacterial endophthalmitis is usually poor. A study of 22 consecutive patients by Yang et al.5 showed that 89 % of patients achieved a visual acuity of light perception at best, with 41 % requiring enucleation or evisceration. Previously, reported anectodal cases with KPEE were generally with a poor visual outcome.6–10 Occasionally, relatively good visual outcome was reported in cases with KPEE.11,12 In a retrospective review of 289 patients with clinical diagnosis of pyogenic liver abscess, 10 patients (3.5 %) with the complication of KPEE were discovered.13 Among them, five patients (50 %) had no light perception, one (light perception) and four (hand movement vision). Ang et al.14 reviewed all consecutive patients with KPEE over 20 years. Their study population comprised 71 eyes of 61 patients. While 80 % had vision worse than 4/200, 26.8 % required evisceration. The authors concluded that patients presenting with hypopyon and unilateral involvement had a poorer visual prognosis. Yoon et al.15 reviewed seven cases of KPEE. Five patients (71 %) had diabetes and four (57 %) liver abscess. Eighty per cent of eyes had hand movements or worse vision at the presentation. After aggressive therapy including pars plana vitrectomy 70 % of eyes had counting fingers vision or worse.

Early recognition of endogenous endophthalmitis is crucial. Therefore clinicians should consider this diagnosis in patients presenting with the suggestive ocular symptoms and having the risk factors for endogenous endophthalmitis. Prompt investigation and meticulous treatment should be instituted as soon as the suspicion arises. Our case clearly is a good clinical example showing the importance of how the proper approach can affect the visual outcome positively in eyes with KPEE.

Omer Takes, Gamze Kocaoglu, Ziya Ayhan and A Osman Saatci have no conflicts of interest to declare. No funding was received in the publication of this article.
Compliance with Ethics Guidelines: Informed consent was received from the patient involved in the case study.