Osteoma is a benign osteogenic lesion with a very slow growth, characterized by proliferation of either cancellous or compact bone. Depending on its location, osteoma may be classified as central, peripheral, or extraskeletal type. Osteoma has been reported in relation to the paranasal sinuses and less frequently with the orbit. We report a case of a 25-year-old female who developed extraskeletal osteoma on her left upper eyelid, without involvement of the paranasal sinuses or orbit. Extraskeletal osteoma of the eyelid is an extremely rare variety. The mass was surgically removed and sent for histopathologic examination, which showed osteoma. To the best of our knowledge, this is the first case of extraskeletal osteoma of the eyelid reported in the English language literature.

Case Report
A healthy 25-year-old female patient, with a 6-month history, reported with a chief complaint of left upper lid mass and droopiness. History revealed that the swelling initially started as a peanut size and had gradually increased to the present size. Ocular examination was suggestive of nontender, bony hard, noncompressible, nonfluctuant, and nonpulsatile swelling on the left upper lid (see Figure 1A and B). The superior, inferior, medial, and lateral margins were well palpable. Mass was nonadherent to orbit, and it could be digitally displaced horizontally or vertically (see Figures 1C and D). The size of the swelling was 25 × 15 × 10 mm.

There was a history of blunt trauma to the left upper lid, and 3 months before she noticed this swelling. There was no history of vision changes, ocular pain, pain with eye movement, or headaches. Her vision was 20/20 in both the eyes. Both the eyes underwent slit lamp examination and fundus was also normal.

Past ocular history and medical history were noncontributory.

Review of systems was negative.

The patient was operated under local anesthesia. Two silk sutures were taken near the lid margin to provide traction during surgery. The globe was secured with an entropion plate. Lid crease incision was performed superficial to tumor (see Figures 2A and B). The lesion was isolated from the surrounding tissue by blunt dissection. Dissection was easily carried out around the mass except for the lower portion, which was found adherent with tarsal plate (see Figures 2B–D). The tumor and its extent were identified. The lesion was excised completely (see Figure 2E). No communication with the orbit or sinuses could be identified.

Gross Examination
The tumor was an encapsulated nodular lesion 25 × 15 × 10 mm in size. The consistency was bony hard. The anterior surface was glistening— white to pink color and was smooth with rounded protuberance. The cross-sections of specimen could not be cut by scalpel (see Figure 4). 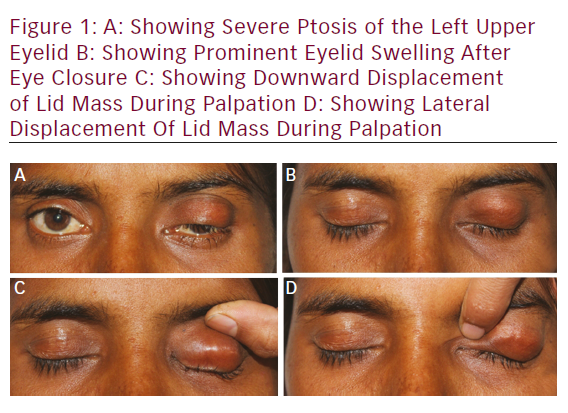 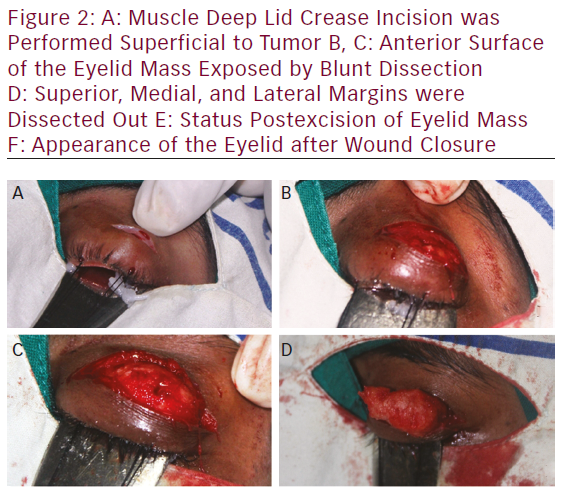 of compact or cancellous bone, almost exclusively found in the head and neck region. Central, peripheral, and extraskeletal are the three variants of osteoma. Trauma, inflammation, developmental disorders, and genetic defects are considered as the etiologic factors.1

Osteoma can occur at any age, but more frequently seen between the third and fifth decades. It has got a slight male predilection.2 Paranasal sinuses are the favorite locations of peripheral osteoma of the craniofacial region—frontal and ethmoidal sinuses being the common ones. External auditory canal, orbit, temporal bone, and pterygoid processes are the other locations.3 Primary orbital bone tumors constitute a very small percentage of all orbital tumors. More often, osteomas originate from the paranasal sinuses. Among the bony orbital tumors, fibrous dysplasias and osteomas are the most commonly encountered entities.4 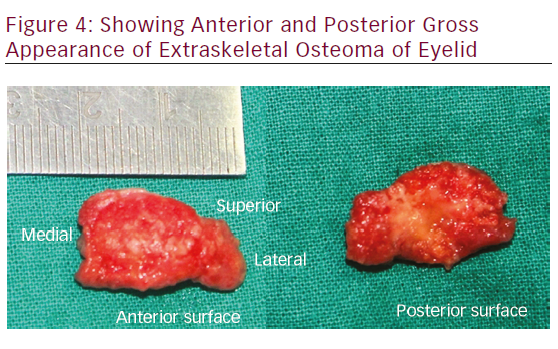 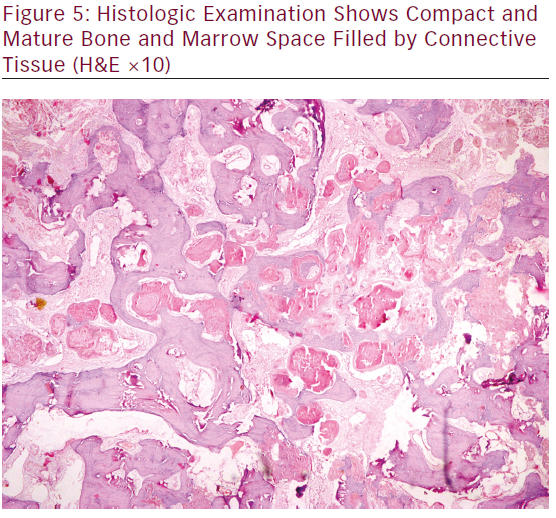 The case we reported here was an extraskeletal osteoma of the eyelid, as it was located in the left upper lid without any communication to orbit or

The osteoma is often slow growing and asymptomatic, diagnosed incidentally on radiographs. But later on, it can achieve a faster growth rate, as the rate of osteogenesis increases, and can cause deformation of the bone and compression of the adjacent structures. They usually appear

as unilateral, sessile or pedunculated, well-circumscribed, mushroomlike masses, ranging from 1.5 to 40 mm in diameter.5 All these features are consistent with the present case. During physical examination, tumor was confined to eyelid and boundaries were well defined and palpable. So we did not order for computed tomography scan and planned this case for an excisional biopsy.

The differential diagnoses in this case include osteoid osteoma, dermoid cyst, and lipoma. Osteoma of the orbit can be seen as a bony hard swelling.6 Dermoid cyst and lipoma are also seen as subcutaneous nodules in the lid, but they will be soft and fluctuant.7

Management of osteoma of the eyelid is complete excision with clear margin to establish the histopathologic diagnosis and prevent recurrence.

Sudhir Singh, MS, has no conflicts of interest to declare. No funding was received for the publication of this article.

This article is published under the Creative Commons Attribution Noncommercial License, which permits any noncommercial use, distribution, adaptation, and
reproduction provided the original author(s) and source are given appropriate credit.
Compliance with Ethical Guidance: Informed consent was received from the patient involved in this study.

Most surgical procedures are performed in the operating room, for obvious reasons. Operating rooms are sterile, they should be stocked with all of the equipment and materials you might need, and the operating-room staff are trained and ready to assist as and when they are needed. But for the sake of convenience, many small surgeries […]

Dominique Bremond-Gignac, MD, PhD, FEBO, is Professor of Ophthalmology and Head of the Department of Ophthalmology with a paediatric and ocular surface subspecialty at the University Hospital Necker–Enfants Malades and University of Paris in Paris, France. She graduated in pharmacology and statistics (MSc) and completed her PhD thesis in anatomy. Her activity is distributed across […]

Response to “Optical Lens Tinting—A Review of its Functional Mechanism, Efficacy, and Applications”

I was interested to read the review, “Optical Lens Tinting—A Review of its Functional Mechanism, Efficacy, and Applications” by Jared Raabe, Ashwini Kini, and Andrew Lee, which appeared in US Ophthalmic Review.1 I am the inventor of the FL–41 lens that features in the article. As the authors point out, the original design of the lens […]