With so many toric intraocular lens (IOL) calculators available online it is important for the doctor to know what is included to improve the accuracy of the toric IOL recommended. Does it allow for long eyes, short eyes, personalised IOL constants, posterior corneal power, and what are the options available after a refractive surprise? There is more to toric IOL calculation than just the question, ‘which is the best formula?’ The calculator features also need to be taken into account.

Accuracy in intraocular lens (IOL) calculations and postoperative outcomes has taken on another level with the availability of toric IOLs. The ability to correct corneal astigmatism at the time of cataract surgery reduces the need for spectacles postoperatively making the necessity to calculate the optimal power of the IOL ever more important.

Calculating an accurate toric intraocular lens power
Knowing and understanding what parameters and adjustments are incorporated both in the biometry and the toric calculator used to calculate an accurate toric IOL power is a major advance to improving outcomes.

The spherical component of the IOL is calculated by the biometry device using personalised constants in various IOL formulae based on analyses of previous cases. The instrument of choice uses the resulting effective lens position (ELP) from modern third (Holladay 1, Hoffer Q, SRK/T) and fourth generation (Holladay 2 and Haigis) formulae to determine the power of the IOL. The third generation formulae utilise corneal power and axial length to predict the ELP whilst the fourth generation formulae address the relationship between anterior chamber depth (ACD) and the length of the posterior segment and as a result have a higher rate of accuracy over a wider range of axial lengths. The fifth generation formulae (Olsen and Barrett Universal II) can provide even better accuracy incorporating ray tracing and lens thickness.

Most of today’s theoretical IOL formulae will give very good outcomes for the average eye where the axial length is between 22 mm and 24 mm and the corneal power centrally in the range of 42.00−45.00 D. However, what do we need to factor in outside these ranges?

AL = axial length
Without these adjustments an unexpected amount of hyperopia occurs.
2. For eyes with an axial length less than 22.00 mm the Hoffer Q and Holladay 2 work well.
3. For long eyes consider using the SRK/T or Barrett formulae. 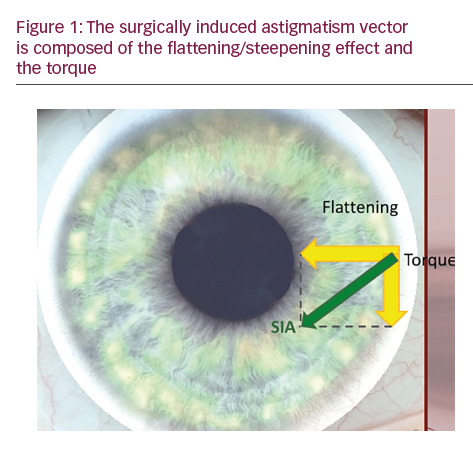 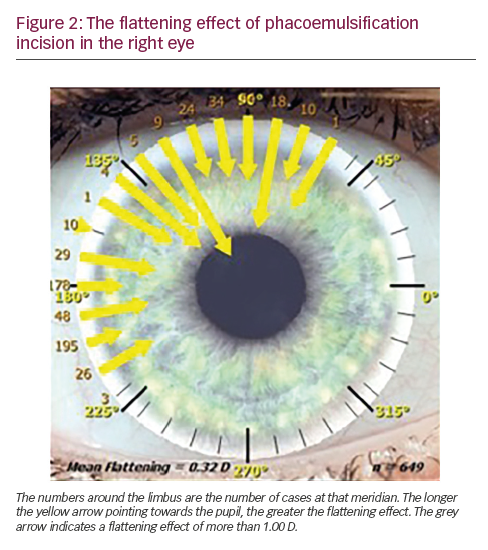 It is important to remember that a 100 micron inaccuracy in the axial length translates to a 0.28 D error in the refraction. Furthermore, a calibrated keratometer assigned to biometry measurements as a cross-check to the keratometry readings from the biometer will play a major role in optimising refractive outcomes.

Detecting inconsistent measurements during biometry
1. A difference in 1.00 D in IOL power between right and left eye should be confirmed.
2. A significant difference between axial length or keratometry between eyes.
The same is true of toric IOL calculators where different amounts of toricity can be calculated depending on what adjustments have been allowed for. 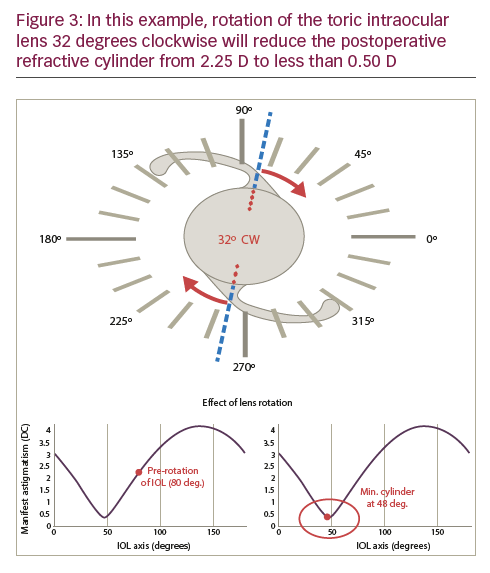 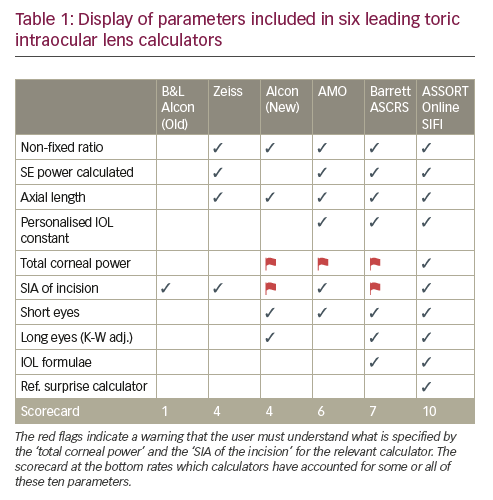 astigmatism so the SIA or FE is not constant; for a 1 D increase in astigmatism the SIA increases by 0.37 D.6 The SIA also varies on whether the incision is placed on the steep or flat meridian.7 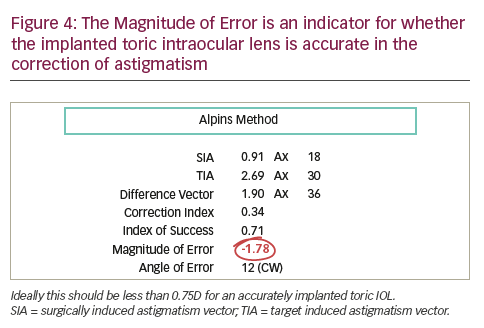 Retrospective analyses of phaco incisions separately for each eye can determine the amount of flattening at specific corneal meridia (Figure 2). This can then be used for future procedures to more accurately determine the effect of the incision on the corneal astigmatism (magnitude and orientation) before calculating the required toricity of the IOL.

9. Does the toric IOL calculator have the ability to analyse and calculate any required rotation of the toric IOL to minimise the refractive cylinder postoperatively should there be a refractive cylinder surprise (ASSORT Toric IOL Calculator, www.assort.com)? This new axis may not necessarily coincide with the postoperative steep corneal meridian.

The example shown in Figure 3 shows a refractive cylinder surprise of -2.25 D x 105. Rotation of the toric IOL 32 degrees clockwise reduces the refractive cylinder to less than 0.50 D. The alignment of the toric IOL may be exactly where it was intended to be and yet there is still a refractive cylinder surprise; this may be attributed to non-lens ORA8 which is pre-existing and originating from retinal tilt and/or cortical perception. Futhermore, does the calculator indicate whether the correct toricity of the IOL has been implanted to avoid IOL exchange and opt for the possibility of laser-assisted in situ keratomileusis (LASIK) instead. The Alpins Method of astigmatism analysis9 for toric IOLs calculates the Magnitude of Error (ME) which indicates whether the toricity of the implanted IOL is too strong or too weak with 0.00 D being the ideal. The example in Figure 4 shows an ME of -1.78 D indicating that the implanted IOL is more than 1.50 D under powered. Should the ME indicate less than 0.75 D then LASIK would be the remaining option without exchanging the IOL.

Understanding and interpreting what the biometry and the toric IOL calculator use and allow for in the calculation of the IOL is imperative to obtaining optimal visual outcomes postoperatively. With many toric IOL calculators now available online, the objective should be to use the check list discussed in this article and select one that covers these important features (Table 1). Any effective formula needs to be coexisting in a calculator with these features to enable it to perform at its optimal capacity.

Noel Alpins is the chief executive officer of ASSORT Surgical Management Systems. No funding was received in the publication of this article. This article is a short opinion piece and did not undergo the journal’s usual peer review process, but was reviewed by the advisory board before publication.
Authorship: All named authors meet the International Committee of Medical Journal Editors (ICMJE) criteria for authorship of this manuscript, take responsibility for the integrity of the work as a whole, and have given final approval to the version to be published.

Welcome to this edition of European Ophthalmic Review, which features a wide range of highly interesting articles that reflect the rapid pace of today’s progress in ophthalmology. We begin with two of our popular expert interviews. First, Dominique Bremond-Gignac discusses the VEKTIS study, which has demonstrated the efficacy and safety of cyclosporine for the treatment of paediatric […]