Purpose: To present available primary outcome results of global Trabectome experience for patients receiving Trabectome procedure including cases with up to 90 months of follow-up. Method: A total of 5,435 cases were included in the study. Baseline demographics were collected and outcome measures included intraocular pressure (IOP), number of glaucoma medications and secondary glaucoma surgery, if any. Survival analysis was performed and success was defined as IOP ≤21 mmHg, at least 20 % of IOP reduction from baseline, and no additional glaucoma surgery. Results: At 90 months, IOP was reduced from 23.0±7.9 mmHg to 16.5±3.8 mmHg (29 %) and the number of glaucoma medications was reduced from 2.6±1.3 to 1.6±1.3 (38 %). At 90 months, the survival rates were 60 % for all cases, 76 % for combined cases and 50 % for Trabectome alone cases. Discussion: These results are generally consistent with previously published outcome results for patients receiving the Trabectome procedure. Conclusion: Considering this outcome analysis of the available global Trabectome experience in combination with outcome data surveyed from the literature, patients receiving Trabectome on average have about a 30 % reduction in IOP and a 60 % reduction in glaucoma medication. The Trabectome procedure can be considered for initial glaucoma therapy, as well as for end-stage patients who have been refractory to other surgical and medical treatments.

Glaucoma is a disease that results in degeneration of the optic disc and can lead to reduced vision and even blindness if left untreated. The purpose of this article is to provide summary results of Trabectome procedures performed between 2004 to 2014. Glaucoma remains one of the leading causes of blindness worldwide. Globally, 60.5 million people were estimated to have glaucoma in 2010, and the number is expected to increase to 79.6 million by 2020.1 Based on population-based surveys, it is indicated that one in 40 adults older than 40 years of age has glaucoma with loss of visual function, equating to about 8.4 million being bilaterally blind.2

Intraocular pressure (IOP) is considered to be one of the main risk factors for optic nerve damage. Hence, one of the goals of glaucoma treatment is to lower and maintain IOP control.3–6 Available treatments for glaucoma include surgical procedures and topical eye drops. Traditional filtering surgeries, such as trabeculectomy and aqueous tube shunt, are associated with potential complications. Complications associated with trabeculectomy include hypotony, hypotony maculopathy, bleb leaks, late blebitis, choroidal effusion and haemorrhage, bleb-related endophthalmitis, peripheral anterior synechiae formation, posterior synechiae and cataract formation.7,8 The complication rates are increased when antifibrotics are used, but the short-term failure rate of trabeculectomy in the absence of antifibrotics is relatively high.8–10 The rate of endophthalmitis is 1 % per year.9 Aqueous tube shunt surgery has the risk of early hypotony, choroidal effusion, suprachoroidal haemorrhage, shallow anterior chamber, diplopia, tube obstruction, conjunctival erosion, tube migration, corneal decompensation, plate encapsulation and late failure.7,8 Due to these high complication rates associated with filtering surgeries, the Trabectome surgical device was developed in attempt to lower IOP while minimising the risks typically associated with filtering surgeries.11 Trabectome also has the advantage of not affecting the success rate of subsequent trabeculectomy, but same effect is not found in selective laser trabeculoplasty (SLT) after Trabectome.12,13

The Trabectome device was cleared by the US Food and Drug Administration (FDA) in 2004. It is designed to address the outflow resistance problems in open angle glaucoma (OAG). The device ablates a strip of trabecular meshwork and the inner wall of Schlemm’s canal and thus re-establishes outflow to the natural pathway.14 Since the procedure does not involve manipulation of the conjunctiva, tenon or external eye wall, the typical complications seen in filtering surgeries are not observed after Trabectome procedures.15 In addition, the procedure is minimally invasive and performed through a clear-corneal incision and thus can be combined with phacoemulsification and intraocular lens implantation.16,17

A number of peer-reviewed Trabectome publications.7,11,12,14–46 are summarised in Table 1 representing different comparative analyses of Trabectome outcomes. For each cited study, the parameters shown in 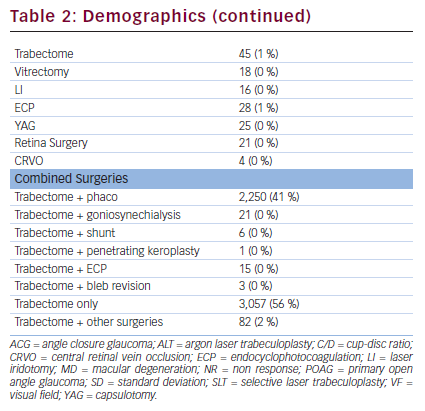 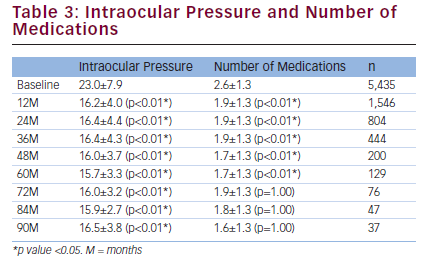 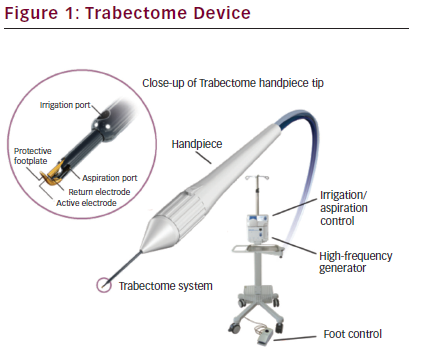 the table include: year of publication, journal, author(s), title, average IOP reduction (%), average glaucoma medication reduction (%), duration of follow-up and total number of cases. This paper is a summary of the first 20 cases of Trabectome surgeons who chose to contribute their initial cases on a voluntary basis globally. 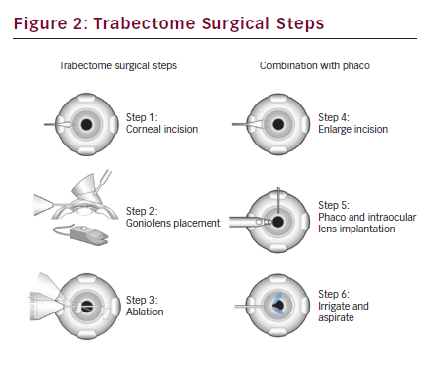 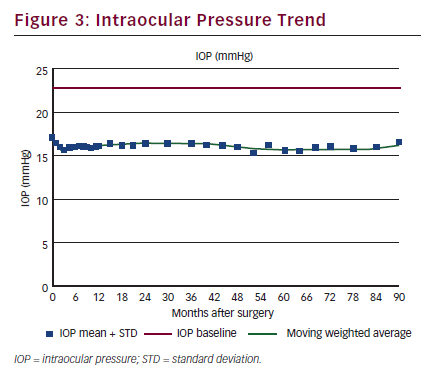 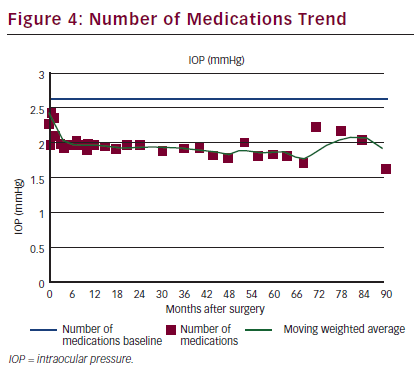 Some surgeons continued to provide additional cases that are also included, but the majority of the data are based on the first 20 cases 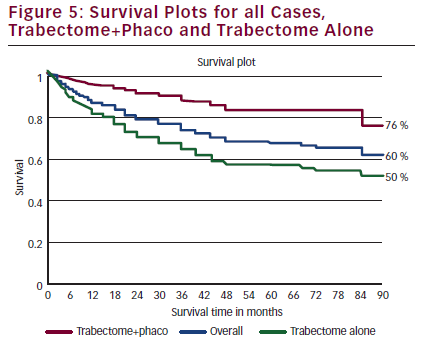 Data were obtained from the Trabectome Study Group Database. The database consists of de-identified data submitted by Trabectome surgeons on standardised forms. Data collected include patient demographics and baseline measures such as pre-operative IOP, glaucoma medication use, surgical history of operative eye, as well as intraoperative details and complications. Outcome measures include IOP, number of glaucoma medications and secondary glaucoma surgery, if any.

All research was conducted with local institutional review board approval and in accordance with the Declaration of Helsinki and the US Health Insurance Portability and Accountability Act.

Details of the device and surgical procedures have been published.14,18 In brief, a 1.6–1.8 mm temporal corneal incision is made, the Trabectome handpiece is inserted into the anterior chamber and advanced nasally. Under gonioscopic view, the handpiece tip is inserted through the trabecular meshwork and into Schlemm’s canal. Once in appropriate position, approximately a 60 to 120 degree arc of trabecular meshwork and inner wall of Schlemm’s canal is ablated. Remnants of ablated tissue are removed via the handpiece’s aspiration flow. In most combined cases, Trabectome is generally performed first and followed by phacoemulsification. Figure 1 shows the device; Figure 2 indicates the basic surgical steps.

Table 2 shows the baseline demographics of the study group. The average age of the study group was 70 years with the gender majority being female (53 %). The largest racial cohorts were Caucasians (45 %) and Japanese (25 %). The diagnosis of the majority of patients was primary open angle glaucoma (POAG) (67 %), followed by pseudoexfoliation glaucoma (13 %). The pre-op Snellen acuity of the largest cohort ranged from 20/20–20/40 (50 %). Measured visual fields were relatively evenly distributed among patients ranging from mild to advanced. The cup to disc ratio of the largest cohort was 0.7–0.8 (32 %), followed by >0.8 (25 %). Grade IV Shaffer represented the largest cohort of 1,985 eyes (37 %), followed by Shaffer grade III in 1,475 eyes (27 %). The largest cohort in terms of lens status was phakic in 3,637 eyes (67 %). Prior to receiving the Trabectome procedure, 1,716 eyes (31 %) had received argon laser trabeculoplasty (ALT) or SLT.

Table 3 shows average IOP and number of glaucoma medications at baseline and at different follow-up time periods. Figures 3 and 4 provide a graphical representation of these data. IOP was reduced from a baseline of 23.0±7.9 mmHg to 16.5±3.8 mmHg at 90 months, while number of glaucoma medications was reduced from 2.6±1.3 to 1.6±1.3 at 90 months. Post-operative observations are presented in Table 4. Three hundred and eighty-three eyes (7 %) required secondary glaucoma surgery. Of the 383 eyes, most underwent additional trabeculectomy or tube shunt. None of the sight-threatening complications associated with traditional filtering surgeries were observed. The survival curves are presented in Figure 5. At 90 months, the survival rates were 60 % for all cases, 76 % for combined cases and 50 % for Trabectome alone cases.

Previous studies with the Trabectome procedure have been promising with the data available at various durations of follow-up. The purpose of this paper is focused on further providing global Trabectome outcomes, biased towards reflecting initial surgeon experience.

The data presented herein are provided on a voluntary basis by surgeons performing Trabectome procedures at centres around the world. Data are compiled based on receipt of de-identified data on standardised forms. There are no pre-defined exclusion criteria imposed for inclusion of cases into this analysis. This is an important factor. As such, these data reflect real-world use of Trabectome for the treatment of glaucoma patients as determined by their physician providers. As indicated in the demographics presented in Table 2, patients receiving the Trabectome procedure in this study include various stages of glaucoma progression, with varying diagnoses and across a broad range of races. Furthermore, the database is biased towards inclusion of the first 20 Trabectome cases performed by starting surgeons, so results as presented would certainly include any early ‘learning curve’ impact without prejudice.

Considering the summary of outcomes for Trabectome patients previously published (see Table 1), it is apparent that most of these studies applied certain exclusion criteria for the purposes of performing certain defined comparative subgroup analyses. However, the intent of this paper is to analyse all available data without exclusion to provide insight into internationally observed Trabectome outcomes on a more universal and all-inclusive basis.

In terms of the primary outcome measures reported in this paper, average IOP was reduced from a baseline of 23.0 mmHg to 16.5 mmHg (28 %) at 90 months, and average number of glaucoma medications was reduced from 2.6 to 1.6 (38 %) at 90 months. These results are generally consistent with previously published outcome results as presented in Table 1.

Although none of the sight-threatening complications associated with traditional filtering surgeries were observed in this study, there have been risks associated with Trabectome procedure reported. Sit et al. reported 4.6 % of 262 cases have developed delayed hyphema, but most cases resolved within 1–2 weeks and only one case required additional surgery.47 Cyclodialysis have also been observed with low incidence rate.48

Considering this compilation and analysis of available data, as well as all of the outcome data surveyed from the literature, patients receiving Trabectome on average have about a 30 % reduction in IOP and a reduction in glaucoma medication use of about 40 %. Given the American Academy of Ophthalmology preferred practice pattern guidelines for at least 25 % initial IOP lowering, the procedure can be considered for initial therapy, as well as for end-stage patients that have been refractory to other surgical and medical treatments.49

Sameh Mosaed is a speaker for Alcon Laboratories and Allergan, and has received grant funding from Glaukos and Solx. No funding was received in the
publication of this article.

Compliance with Ethical Guidance: All research was conducted with local institutional review board approval and in accordance with the Declaration of Helsinki and the US Health Insurance Portability and Accountability Act.