Laser Peripheral Iridotomy
Indications and Efficacy
Laser peripheral iridotomy (LPI) is a treatment that creates an opening in the peripheral iris to allow an alternative pathway for aqueous to flow between the anterior and posterior chamber, bypassing the pupil. This eliminates the element of pupil block, which is the most common contributing factor to angle closure in PACG.3 There are many other factors that contribute to the narrowing of the drainage angle, which includes lens vault, cataract, axial length, iris root thickness, and plateau iris configuration.4 LPI is indicated in acute ACG (AACG), in the fellow eye of AACG, PAC suspects (PACS), PAC, and PACG (see Table 1). There is some evidence that LPI can be helpful in phacomorphic glaucoma and pigment dispersion syndrome.3

The effectiveness of LPI in preventing glaucoma, controlling IOP, and improving angle width, varies according to severity of disease at presentation as well as mechanism underlying angle closure. LPI is successful in preventing acute PAC (APAC) in the fellow eye of patients who had APAC. When followed up over 4 years, none of the fellow eyes treated with LPI developed APAC while only 11.2 % of cases had an increase in IOP during follow-up, which required additional medical or surgical intervention.5

LPI can also be useful in controlling IOP and angle width.5,6 The Liwan Eye study in China reported a mean IOP reduction of 3 mmHg and increase in anterior chamber angle width of 2 units in Shaffer angle grade, 2 weeks post-LPI.6 By contrast, a Vietnamese study with a longer mean follow-up time of 12 years reported 22.2 % of patients with PACS progressed to PAC despite LPI.7 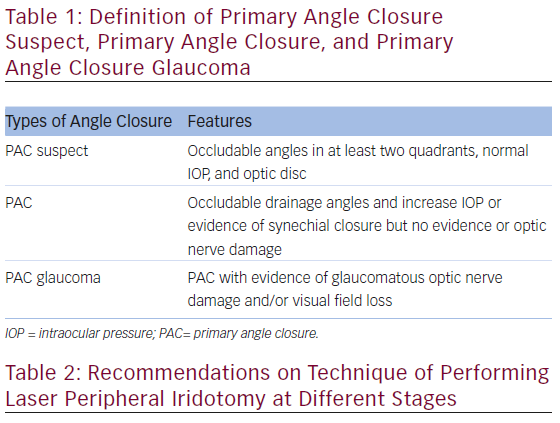 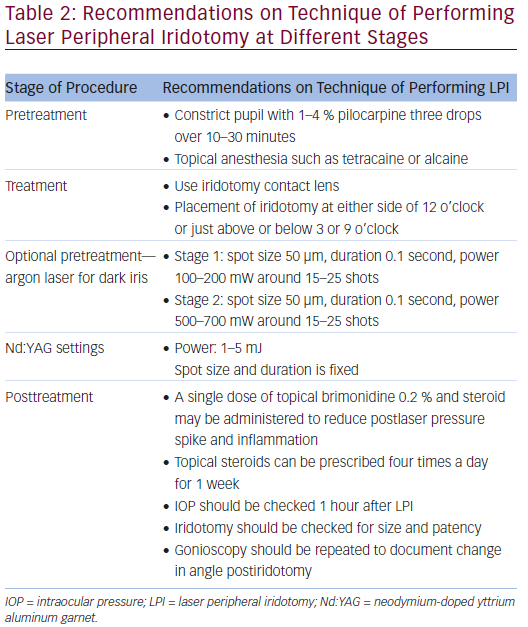 additional intervention after initial LPI.8 Ang et al. reported 58 % of patients developed IOP rise after LPI for APAC when followed up over 4 years. The authors also reported the presence of 180 or more of peripheral anterior synechiae (PAS) predictive for need of adjunctive medical or surgical intervention post-LPI.5

A systematic review of three randomized controlled trials by Saw et al. comparing surgical PI and laser PI found no significant difference in effectiveness between both treatment groups.9 However, LPI is much less invasive and has essentially replaced surgical PI as a treatment for primary disease.

Contraindications for Laser Peripheral Iridotomy
Contraindications for LPI include the following:10
1. Condition resulting in poor view of the iris such as significant corneal edema or opacities.
2. Flat or very shallow anterior chamber.
3. Secondary angle closure with no mechanism of pupillary block, such as neovascular glaucoma or iridocorneal-endothelial syndrome.
4. Extensive inflammation.
5. Poorly cooperative patient.

Procedure
Argon LPI was introduced by Khuri in 1973.2 Although well absorbed by pigments of dark irides, the literature reported up to 20 % of incomplete iridotomies due to a higher energy requirement and a 30 % closure rate in argon laser iridotomies.11 Neodymium-doped yttrium aluminum garnet (Nd:YAG) laser iridotomy, which was introduced later and found to be effective with lower total energy used and closure rates compared with argon laser alone.10 Nd:YAG laser is now well recognized to be the preferred laser modality for LPI for light blue or medium brown irides. Many authors recommend pretreating thick dark irides with argon laser prior to Nd:YAG laser. Ho and Fan reported up to a third less energy used compared with pure argon or Nd:YAG laser with all iridotomies remained patent at 14 months follow-up in dark irides.12 The iridotomy needs to be of sufficient size to allow aqueous flow and pressure equalization between the anterior and posterior chambers. Mathematical modeling using Navier-Stokes equations suggests that a peripheral iridotomy length of 50 μm would reduce the pressure differential to less than 1 mmHg.13 It has been proposed that a minimum diameter of at least 150 μm is necessary to add in a safety margin to account for posttreatment iris edema, fibrosis, pigment epithelial proliferation, or pupil dilatation.14
Table 2 summarizes the technique of LPI.

Complications
Most complications of LPI are transient and self-limiting, including postoperative IOP spike, uveitis, and hyphema.

Nd:YAG laser to the cornea appears as star-shaped bursts. Direct endothelial cell damage is not reversible but usually remains localized. Routine LPI for PACS does not appear to increase the risk for endothelial cell loss. A Singaporean study comparing the endothelial cell count after LPI to the fellow untreated eye, found both groups had a reduced endothelial cell count (3.6 % and 3.2 %, respectively) at 3 years, but the difference between both groups was not statistically significant.15 There have been reports of focal and generalized corneal edema, Descemet’s membrane detachment, and even delayed corneal decompensation.15,16

Anterior chamber bleeding is a common complication of LPI. Fortunately, it is often self-limiting and stops with gentle pressure on the eye applied with the contact lens.17,18

The most common complication after an LPI is postlaser IOP elevation, the incidence of which varies from 5.7 % to 40 % depending on the definition of an IOP spike. A pressure spike usually occurs within the first 1 hour after LPI. The largest prospective study of PACS receiving LPI was from China. Of the 734 eyes, 9.8 % had an IOP spike of >8 mmHg, and only 0.54 % had an IOP >30 mmHg after 1 hour; 0.82 % continued to have raised IOP at 2 weeks.18 Pre- and/or posttreatment with brimonidine 0.2 % or apraclonidine 0.5 % is helpful in preventing IOP spikes.19 Care must be provided for patients with advanced PACG as pressure spikes may be severe and prolonged, causing further vision loss in a compromised nerve. IOP should be monitored closely in these cases.

Mild iritis is a common complication but usually resolves with topical steroids within a day. Cycloplegics are rarely required but posterior synechia may develop.

Dysphotopsia post-LPI has been reported in 2.7–4 % of patients. Spaeth reported these visual symptoms were more common in patients with partially or completely exposed LPI.20 Hence, iridotomies are traditionally sited between 11 o’clock and 1 o’clock position, ensuring full coverage by the upper eyelid. A recent randomized controlled study by Vera and colleagues comparing dysphotopsia in temporal and superior LPI, however, reported new-onset linear dysphotopsia in 10.7 % of patients with superior PI versus 2.4 % in the temporal PI group.21 The group also reported the likelihood of developing new-onset dysphotopsia in patients with partial or fully covered PI was four times higher than fully exposed PI.21 Based on the principle of optical light diffraction, the authors suggested that light directed to a superior LPI would be redirected to the superior peripheral retina after a short distance and appear relatively focused. Light passing through a temporal PI, on the other hand, continues in a straight line over a long course, resulting in a poorly focused image on the retina and less perceived to patients; hence, suggesting fully exposed temporal placement of iridotomies.21 Other reported LPI complications include risk for cataract,22 closure of iridotomy, lens dislocation,23 macula hole, choroidal, and retinal detachment.3

Laser Peripheral
Iridoplasty Indications and Efficacy
Argon laser iridoplasty (ALP) is a procedure to open an appositionally closed angle. LPI is the definitive treatment for pupil block, but ALP can be helpful in other causes of angle closure such as plateau iris or acute phacomorphic angle closure. The laser energy causes shrinkage of the iris tissue—pulling the iris away from the drainage angle and debulking the peripheral iris.24

ALP can be useful in AACG that is nonresponsive to medical therapy or where LPI is difficult due to a cloudy cornea and a shallow anterior chamber. ALP can temporarily force the drainage angle open and relieve the high IOP.25 With the IOP reduced, the cornea often clears and eye is less inflamed creating a more favorable condition for the LPI or even lens extraction. Studies have shown that primary ALP is as effective as medical treatment in the management of AACG and acute phacomorphic glaucoma.25,26

ALP has been investigated to attempt to improve the angle width in patients with plateau iris configuration, plateau iris syndrome, and patients with a post-LPI where the angle remains narrow. There is little evidence that ALP is helpful in these situations and, therefore, remains controversial.27–29 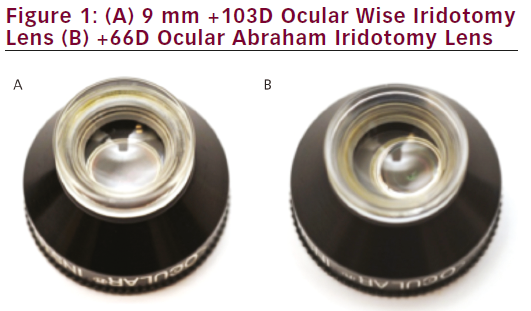 Technique
Pretreatment with hypotensive agent such as 0.2 % brimonidine or 1 % apraclonidine, and pilocarpine 2 % or 4 %.

Abraham lens or Weiss iridotomy lens (see Figure 1) is used and the procedure is performed under topical anesthesia, such as amethocaine 1 %.

Argon laser is delivered with a laser setting of 500 μm spot size and 0.5 second. Power is set at 200–400 mW and titrated until tissue contraction seen without bubble formation. The later implies overheating of iris tissue and the laser power should be reduced. Darker irides tend to require less power compared with lighter irides.

One should apply 20–24 spots, 360° over the peripheral iris, avoiding areas of PAS, radial iris vessels, and iris defects. The aiming beam is focused on the peripheral iris as close to the limbus as possible. The laser applications should be 1–2 spot sizes apart.

Postlaser topical steroids or anti-inflammatory are given and continued for a few days. IOP is checked 1 hour postprocedure and again in 1 week to assess response.

Complications
Most common complications are transient and include mild iritis and postlaser IOP spike. Laser peripheral iridoplasty may be associated with risk for corneal burns or corneal endothelial damage, as the procedure is often performed in eyes with very shallow anterior chamber.25 This risk could be minimized by initially placing a more central ring of laser burn before placing a second coaxial ring of laser burn around the peripheral iris. Rarely, iris atrophy or necrosis could occur, usually when adjacent laser burns are placed too close.24

Lasers still play a major role in the management of angle closure and are proven to be effective and relatively safe. Ultimately, the choice of therapy in angle closure depends on the underlying mechanism and the individual patient.

Wai Kitt Chee, MBBCh, Sanjay Srinivasan, MBBS, MRCS, MMed(Oph), MS(Oph), DNB(Oph) and Jason Cheng, MBBS, BSc, FRCOphth, FAMS, FRANZCO, have no
conflicts of interest to declare. No funding was received in the publication of this article.