Ever since cross-linking (CXL) technology was introduced into clinical ophthalmology in 1999, the technique has established itself as a standard of care in the treatment of corneal ectasia. The original protocol, referred to as the ‘Dresden protocol’, consisted of 30 minutes of iso-osmolaric riboflavin instillation on a de-epithelialised cornea, followed by irradiation at 365 nm and 3 mW/cm2 for 30 minutes. These settings correspond to a fluence of 5.4 J/cm2. A large variety of modifications of this original protocol have emerged in the past years: some of these modifications are backed up by a solid body of research evidence, both clinically and experimentally, whereas other modifications are based on little to no scientific evidence. Navigating through this ‘sea of new protocols’ is becoming increasingly difficult for the treating ophthalmologist. The two most important modifications are transepithelial (epi-on) CXL and accelerated CXL. Most interestingly, they seem to share a final common pathway, which determines efficacy: oxygen dependency.

The Dresden Protocol
When corneal cross-linking (CXL) was established in the animal model in 1995, two factors seemed to determine the stiffening effect: availability of riboflavin in the corneal stroma and delivery of energy via short wavelength light. Early experiments indicated that riboflavin, with its molecular weight of 376, would not easily pass the intact epithelium, and that a mechanical abrasion would become necessary.1–4 Saturation studies showed that 20 to 30 minutes are needed to immerse the stroma with iso-osmolaric riboflavin. The amount of total UV-A energy (fluence) needed to cross-link the cornea was determined with two considerations in mind: avoiding endothelial damage by staying below the damage threshold of 0.35 mW/cm2, and inducing an effect in the anterior, mid and deep stroma. The first was based on a mathematical calculation with known variables, and according to Lambert-Beers law. The latter was assessed by analysing keratocyte apoptosis.5–8 Finally, a total fluence of 5.4 J/cm2 was determined as ideal to achieve both goals. At the time, LED technology had just emerged, and the strongest LEDs available on the market delivered 3 mW/cm2. So, to provide the total fluence of 5.4 J/cm2, a total irradiation time of 30 minutes was necessary.2,9

Transepithelial (‘Epi-on’) Cross-linking,
Accelerated Cross-linking
In 2009, a first major modification of the technique emerged: CXL without removal of the epithelium.10 In its initial stages, the saturation of the corneal stroma through an intact epithelium remained poor, but modified solutions and, later, the use of iontophoresis managed to increase the concentration of riboflavin in the cornea to levels almost comparable to the levels achieved in classic ‘epi-off’ CXL.11–16 The method was also heavily marketed from the beginning. Unfortunately, the clinical results obtained with transepithelial CXL remained disappointing: the success rate in the so-called ‘epi-on’ technique dropped from 97 % (Dresden epi-off) to less than 80 %.17–19

Another major modification in recent years was the attempt to shorten treatment time. There was consensus in the community that the overall fluence of 5.4 J/cm2 should be maintained, but with the emergence of new and more powerful LED technologies, this same fluence could be delivered much faster, in 10, 5 and even 3 minutes. The rationale was the Bunsen-Roscoe law of reciprocity. This law of photochemistry states that ‘… a photochemical reaction should stay constant if the delivered total energy is kept constant’.20 So, theoretically, 30 minutes irradiation at 3 mW/cm2, and 3 minutes irradiation at 30 mW/cm2 should have the same effect. A number of devices then came to market, offering accelerated CXL, before any clinical data were available. As a consequence, we have to learn the hard way again: our laboratory study, published in Investigative Ophthalmology & Visual Science in 2014, suggested that 10 minutes at 9 mW/cm2 already show a certain decrease in the stiffening effect, when compared with the Dresden protocol, and 5 minutes at 18 mW/ cm2 show an even stronger decrease.20 Clinical studies needed time to complete, and appeared almost 3 years after the first devices were commercially available. As per end of 2015, it seems that 10 minutes at 9 mW/cm2 seem to arrest keratoconus progression, whereas 5 minutes at 18 mW/cm2 fail to stabilise ectasia.21–24 Again, these were disappointing clinical results, and they show us that it may sometimes be wise to wait with adapting new trends until they are scientifically and clinically validated.

The Need for Oxygen
Is there a common reason why the clinical results obtained in transepithelial and accelerated CXL are so disappointing? Is there yet another element to consider besides riboflavin concentration and UV-A energy? We believe so, and we believe to have identified this factor in a series of experiments that were published in 2013: the missing factor is oxygen (see Figure 1). We performed CXL experiments on porcine eyes in a chamber filled with helium (see Figure 2). The helium removed all oxygen from the air (atmosphere). When measuring the biomechanical effect of CXL under helium, we noticed that no CXL effect at all had happened. This shows that oxygen and its most reactive form, singlet oxygen, is essential for the photochemical reaction that leads to CXL.25 Now, everything seemed to fall into place: for transepithelial CXL this means that riboflavin in the stroma alone is not sufficient. The intact epithelium is a barrier to oxygen, and consumes as much oxygen as the entire stroma, leaving too little oxygen for the CXL reaction to occur. This may also apply for accelerated CXL: for cross-links to occur, a certain amount of oxygen is required to be present in the cornea. The standard Dresden protocol, with its ‘slow’ irradiation, probably allows for the oxygen to replenish, whereas the accelerated CXL protocols consume too much oxygen at a time, and run out of oxygen after a short time. Even the recent ‘pulsed’ irradiation devices fail to provide a clinical advantage, because the time to replenish the corneal stroma with oxygen is too short.

In conclusion, everybody, us included, would want to offer a pain-free and fast CXL procedure to their patients. But we cannot beat nature. And the most important element in the CXL procedure is the successrate. 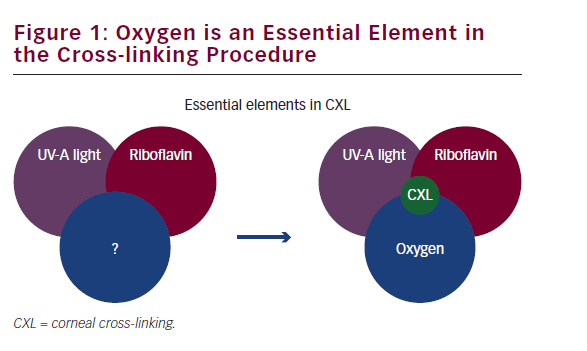 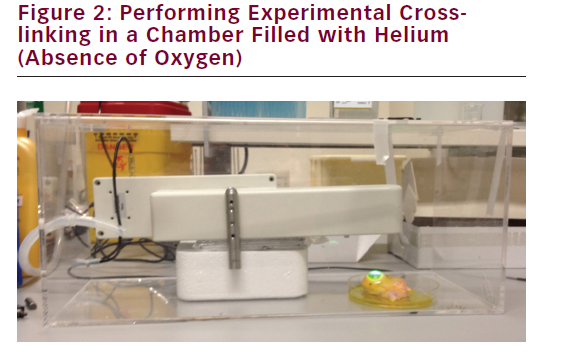 So when keeping the patient’s overall well-being as the focus point, we currently irradiate with 9 mW/cm2 for 10 minutes, using constant light in an epi-off procedure.