Optical coherence tomography angiography (OCTA) is an exciting new imaging technology that allows for non-invasive non-dye-based visualization of blood flow in the posterior pole. The technology has been used to image a variety of chorioretinal disorders including choroidal neovascularization in age-related macular degeneration, diabetic retinopathy, retinal arterial occlusion, retinal vein occlusion, and macular telangiectasia type 2. Continued advances in the software will improve the quality of OCTA and reduce image artifacts.

In 2015, a novel imaging technology called optical coherence tomography angiography (OCTA) became available for clinical use. The features of many disorders, including diabetic retinopathy (DR), choroidal neovascularization (CNV), macular telangiectasia type 2, retinal vascular occlusion, and sickle cell retinopathy have been characterized by OCTA. OCTA is a non-invasive, non-dye-based imaging technique that employs motion contrast to create high-resolution depth-resolved angiographic images of vascular flow in a matter of minutes.1–3 The software compares the decorrelation signal or phase variance between consecutive OCT B-scans acquired at the same retinal cross-section to detect motion contrast.4–6 Differences between OCT B-scans are assumed to represent movement due to erythrocytes in the vasculature. Using this information from multiple retinal cross-sections, a volumetric retinal map (OCT angiogram) is constructed and co-registered with the OCT B-scans used to develop the OCT angiogram. This allows for evaluation of blood flow in the OCT angiogram and structural information in the OCT B-scans in tandem. The scanning areas currently vary from 2 x 2 mm to 12 x 12 mm, and are comprised of multiple A-scans, depending on machine parameters. OCT angiograms can be segmented into en face slabs to evaluate the different retinal vascular layers (e.g. superficial inner retina, deep inner retina, outer retina, choriocapillaris) in isolation (Figure 1).7 OCTA is one of the only in vivo techniques to visualize choroidal flow in detail.8

Image Interpretation
Current limitations of OCTA are that image resolution is reduced when its scanning area is increased, that quantitative measurement software is limited, and the occurrence of image artifacts. With the Optovue Avanti TM software (OptoVue Inc., Fremont, CA) the same number of OCT B-scans are used regardless of the scanning area, with the regions between the OCT B-scans interpolated from the data provided. Therefore, as scanning height and width each double, resolution is reduced four-fold. This can be improved by montaging multiple smaller scan areas together and software is being created to do this in an automated fashion.9

While much of the current utility of OCTA revolves around qualitative assessment, quantitative tools are under development. The size of the foveal avascular zone (FAZ) is quantifiable using the prototype AngioVue software of the RTVue® XR OCT device (OptoVue Inc., Fremont, CA). Carpineto et al. found highly reproducible automated FAZ measurements in 60 healthy eyes.10 Automated software has been able to quantify decreased capillary perfusion density in eyes with DR compared with control eyes.11,12

Multiple OCTA image artifacts may affect image quality. Motion artifact due to blinking or gross eye movement appear as horizontal or vertical black and white lines, respectively, and motion correction software can create vessel doubling, stretching of the image, quilting, or loss of detail in the attempt to compensate for these motion artifacts.13,14 Signal attenuation or masking can occur below optically dense material such as thickened retinal pigment epithelium (RPE) or hard exudates, making the area below dark. This artifact can be mistaken for flow
voids. 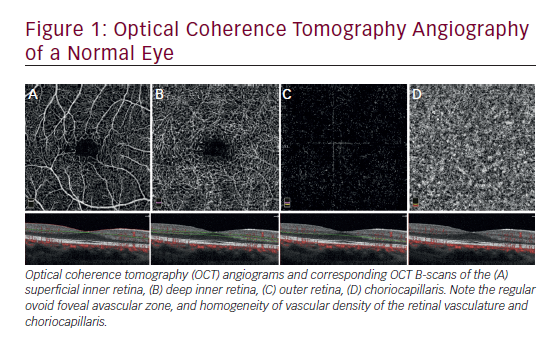 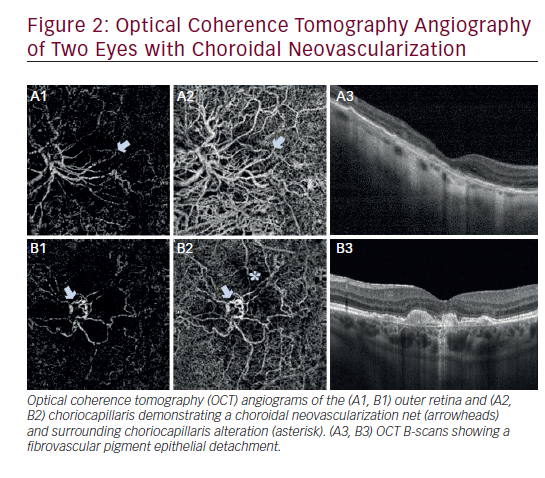 Conversely, unmasking or increased signal can appear under areas of absent RPE.13,14 OCTA depicts presence or absence of flow, but is limited by the sensitivity threshold of slowest detectable flow, determined by the time between repeated OCT B-scans. Therefore, an area of absent flow on OCTA represents either low flow or no flow. Projection artifact has been described as the ghost image of the inner retinal vasculature projected onto the outer retina. Automated software can remove this artifact so abnormal neovascularization in the outer retina can be more easily seen.13–15 Finally, the deeper choroidal vessels appear dark (instead of white) due to fringe washout and a stromal decorrelation signal is seen on the OCT angiogram.14

OCTA is useful to evaluate CNV due to choroidal diseases such as agerelated macular degeneration (AMD), central serous chorioretinopathy (CSCR), and polypoidal choroidal vasculopathy (PCV). Segmentation of the outer retina and/or choriocapillaris shows type 1 and 2 CNV as either a well-circumscribed seafan network or a poorly-circumscribed filamentous vascular tree (Figure 2), while type 3 CNV appears as a vascular tuft or ball above a retinal pigment epithelial detachment (PED).16–24 The feeder vessel to the choroid in type 1 and 2 CNV and to the retinal vasculature in type 3 CNV may be visible when there is good signal and scan quality.24,25 Polyps in eyes with PCV are not easily visualized using OCTA.26 OCTA can be used to monitor CNV after anti-vascular endothelial growth factor (anti- VEGF) treatment with reduced CNV density and size, vascular rarefication, and loss of smaller or peripheral capillaries after therapy.27–31 Flow within a vascular network may be apparent on OCTA in a disciform scar from AMD.32 One study demonstrated alterations in the retinal vasculature in early to intermediate AMD with reduced vessel density in both the superficial and deep inner retinal plexuses and reduced choroidal thickness compared with control.33 Choriocapillaris flow impairment is noted on OCTA below and adjacent to areas of geographic atrophy in AMD.34

Diabetic Retinopathy
OCTA in DR may demonstrate capillary non-perfusion, microaneurysms, irregular and/or enlarged FAZ, intraretinal microvascular abnormalities (IRMA), diabetic macular edema, and preretinal neovascularization (Figure 3).35–37 When compared with fluorescein angiography (FA), OCTA can image many microvascular changes more readily due to its higher resolution as well as less obscuration from fluorescein dye with the exception of microaneurysms where the pooling of dye on FA make these more apparent.38–40 The normally ovoid and regular shape of a normal FAZ may become irregular and enlarged in DR, which is more notable in the deep inner retina.41 The FAZ is enlarged in diabetic eyes compared with age-matched controls, and increases with each stage of progression of retinopathy.42,43 Segmentation of the OCTA above the internal limiting membrane in proliferative DR allows for visualization of preretinal neovascularization, which often occurs adjacent to capillary non-perfusion and/or IRMA.44

Retinal Artery and Vein Occlusions
In retinal artery and vein occlusions, the distribution of non-perfusion is precisely demonstrated on OCTA and corresponds to clinical findings and delayed fluorescein dye perfusion.45,46 The borders of non-perfusion may be more distinct on OCTA than FA due to the ability to segment vascular layers with OCTA and the absence of FA-induced choroidal flush, which may make it more difficult to discern non-perfusion.47 In chronic retinal artery occlusion, the radial peripapillary network is attenuated on OCTA, but is difficult to visualize on FA without the ability to segment.45 In retinal vein occlusion, OCTA is at least as sensitive as FA for visualization of the microvascular detail at the border between healthy and diseased retina.48 Chronic changes at the border such as vascular congestion/dilation, capillary non-perfusion, vessel rarefication, telangiectatic vessels, microaneurysms, retinal neovascularization, and collaterals are visible using OCTA.49–51 OCTA segmentation reveals that the deep plexus may be affected to a greater degree than the superficial plexus in retinal vein occlusions.50,52

Macular Telangiectasia Type 2
In macular telangiectasia type 2, OCTA demonstrates reduced capillary density and the deep inner retinal plexus is more prominently involved.53,54 Telangiectasias, increased intercapillary area, vascular dilation or rarefication, capillary anastomoses between the superficial and deep inner retinal plexuses, and neovascularization into the outer retina or subretinal space correlating to ellipsoid zone loss can be seen using OCTA, which may be more revealing than FA imaging.55–57 Spaide et al. used volume rendering to evaluate macular telangiectasia type 2 in 3D to further note that lateral contraction occurred in many of the eyes causing the vessels to appear as 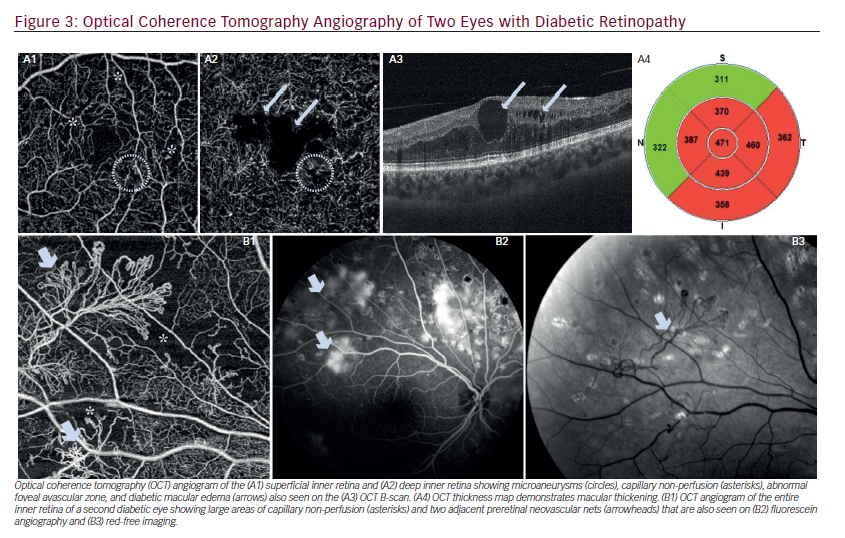 if they were radiating from a single locus, a right-angle vein that dove down into the outer retina, causing vascular invasion.58

Other Disorders
OCTA can be used to detect CNV and monitor therapeutic response in uveitic diseases even when traditional imaging modalities show an inactive PED or scar.59–61 Non-retinal ophthalmologic diseases including glaucoma and corneal neovascularization have also been assessed.62–64 Reduction in optic nerve head peripapillary network perfusion may be detected even in early glaucoma.65–67

Conclusions
OCTA is a novel imaging modality that depicts retinal and choroidal vascular flow in great detail. The ability to segment OCT angiograms into the different vascular layers may improve understanding of disease pathogenesis and has already demonstrated that the deep inner retinal plexus appears to be more affected than the superficial plexus in some retinal disorders. OCTA can demonstrate many posterior pole vascular abnormalities similarly to FA, but OCTA is non-invasive, fast, and does not require dye injection. Future OCTA studies will elucidate more on ophthalmologic disease processes and therapies.