Diabetic retinopathy (DR) is the most common cause of moderate-tosevere visual impairment among working class adults.1 Diabetic macular oedema (DMO), a common manifestation of DR, causes central vision loss,2 and is a consequence of vascular inner blood–retinal barrier breakdown.3 Global prevalence of DR among diabetic individuals is approximately 35 %, with DMO present in 6.8 %.4 DMO is difficult to manage due to its chronicity. Historically, the standard of care was laser therapy; however, a large number of patients continued to lose vision,1,5 with significant vision recovery in only 15 % of treated patients.11 In particular, patients presenting with diffuse DMO, where causal vascular abnormalities are not restricted to discrete foci, are likely to be refractory to laser therapy.6 Given the proportion of patients with DMO refractory to laser therapy, new therapies providing sustained benefit are needed.7

Report of a Case

A retired, 62-year-old male patient with type 2 diabetes mellitus since 1992 (insulin dependent since 2002) was first treated for DMO in 2004, for which he received left eye (LE) laser photocoagulation and triamcinolone injection when his BCVA was 0.2 for his LE and 0.8 for his right eye (RE). Lost to follow-up until 2011, BCVA had deteriorated to 0.2 in both eyes. From 2011, the patient’s response to therapy was evaluated using BCVA and CFT measured using spectral optical coherence tomography (OCT). IV ranibizumab injection in 2011 gave no benefit for LE BCVA and given the lack of response to therapy and the long history of DMO, no further treatment was administered to the LE at this time.

In July 2013 the patient had a 0.2 μg/day FAc implant inserted. Within 3 weeks, OCT indicated complete DMO regression that was not achieved with any of the previous IV therapies, resulting in CFT decreasing by 58 % after 10 weeks (548 μm to 232 μm; Figure 1B and Figure 2). These improvements were still apparent 6 months following 0.2 μg/day FAc implantation, with a concurrent increase in BCVA to 0.3 at its highest point (a clinically meaningful change from the previous BCVA of 0.2). In January 2014, OCT showed DMO with a progression of CFT (289 μm). Bevacizumab was injected twice, 3 weeks apart in February 2014, leading to regression of DMO (CFT 282 μm; BCVA 0.25). In July 2014, CFT was seen to be further reduced to 214 μm, and another bevacizumab injection was administered. The patient reported greater vision-related quality of life and the ability to perform daily routines without problems, with no complaints regarding 0.2 μg/day FAc implant therapy.

Following 0.2 μg/day FAc implantation, gradual elevation in IOP was observed over the first 2 months (from 16 mmHg to 28 mmHg). This was resolved with daily dorzolamide/timolol eye drops (21 mmHg at 6 months). In February 2014, tafluoprost eye drops were prescribed in addition to further reduce the IOP. The daily application of eye drops was not a concern for the patient and did not interfere with his quality of life.

Randomized clinical trials indicate intraocular vascular endothelial growth factor (VEGF) inhibition provides significant BCVA and CFT improvements in patients with DMO.12 While this is a widely used therapeutic strategy in patients refractory to laser therapy, other studies have shown that anti-VEGF therapy alone is not effective in all patients with DMO,13 as shown in this case. 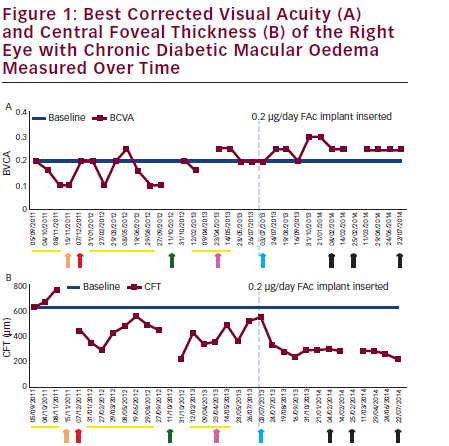 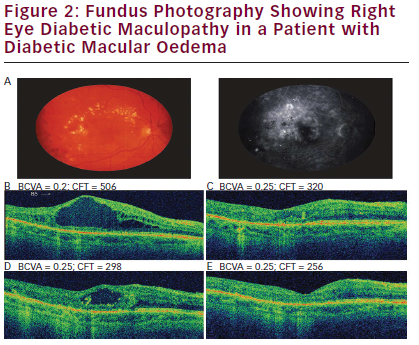 The Fluocinolone Acetonide for Macular Edema (FAME) study demonstrated a single IV injection FAc implant can provide significant, long-term BCVA and CFT improvements in chronic DMO patients.7,14 In this case study, a single 0.2 μg/day FAc implant improved BCVA and CFT when the patient was insufficiently responsive to all previous treatments, including ranibizumab, laser photocoagulation and dexamethasone implant. However, dexamethasone implant provides release of corticosteroid over a shorter timeframe compared with FAc implant,15 possibly accounting for the relatively short duration of CFT decrease and lack of VA response observed when administered.

FAc implant gave marked improvements of BCVA and with complete regression of MO after 3 weeks, consistent with the FAME study,7 which were still apparent after 6 months. Additional anti-VEGF therapy in February 2014 appeared to increase these benefits, reflecting the multifactorial nature of DMO.16 IOP was elevated with 0.2 μg/day FAc, but was effectively managed by twice-daily dorzolamide/timolol and oncedaily tafluprost eye drops. Given the lack of response to other currently available therapies, and the improvement in vision, the benefit–risk ratio following the 0.2 μg/day FAc implantation is positive for this patient and highlights the importance of early intervention when a patient is responding insufficiently, or not responding, to anti-VEGF therapy. The current outcomes also suggest that to achieve functional benefits from DMO resolution (e.g. BCVA of 0.5 to permit holding a standard driving licence), earlier treatment should be considered.

This case illustrates how 0.2 μg/day FAc implant, with its long-term, low-dose corticosteroid, can provide effective long-term therapy (up to 36 months with one injection) with manageable side effects and an improvement in quality of life and general daily living. It is rewarding to note that our patient reported greater vision-related quality of life and the ability to perform daily routines without problems following 0.2 μg/day FAc implant. In patients with chronic DMO, the relative functional benefits and manageable side-effect profile of 0.2 mg/day FAc implant support its use in patients that are insufficiently responsive to available therapies.

To summarise, 0.2 μg/day FAc implant could have been considered earlier in the treatment of DMO and once the patient had shown limited or no response to anti-VEGF therapy. The current case shows CFT improved following treatment with dexamethasone. If ILUVIEN had been licensed at the time, it may have been considered at this stage to help stabilise CFT and BCVA.

Érica ABC Guerreiro Paulo and Claus Eckardt have no conflicts of interest to declare.

The publication of this article was funded by Alimera Sciences Ltd.

Compliance with Ethical Guidance: Procedures were followed in accordance with the responsible committee on human experimentation and with the Helsinki Declaration of 1975 and subsequent revisions. Informed consent was received from all patients involved in the study.

Medical writing and editorial assistance was provided by QXV Communications, Macclesfield, UK and was funded by Alimera Sciences.