Diabetic macular oedema (DMO) is the main cause of vision loss in diabetic retinopathy. The ILUVIEN® intravitreal implant, which contains fluocinolone acetonide and is administered by injection into the vitreous cavity, should be considered if the patient is not responding to anti-vascular endothelial growth factor (VEGF) therapy, and the patient fulfils the recommendations of the National Institute for Health and Care Excellence (NICE) Technology Appraisal 301. The efficacy and safety of the ILUVIEN implant has been demonstrated in clinical studies, and a pre-planned subgroup analysis has shown that it is particularly beneficial in patients with chronic DMO. This case study is the first report in the UK of the effectiveness of the ILUVIEN implant in a patient in whom therapy with ranibizumab did not result in sustained improvements in terms of visual outcomes and foveal thickness.

The International Diabetes Federation (IDF) estimated that 8.3 % of adults (or 382 million) had diabetes in 2013.1 This is significantly higher than previous estimates (2.8 % or 171 million adults).2 Diabetic retinopathy (DR) is a potentially sight-threatening disease affecting the retinal microvasculature and associated with prolonged hyperglycaemia and other conditions linked to diabetes mellitus such as hypertension.3 DR is a chronic progressive disease with a prevalence of 34.6 %.4 The prevalence of DR and new cases of DR varies by country with prevalence ranging from 10 % in Norway to 61 % in South Africa and newly diagnosed cases ranging from 1.5 % in African Americans to 31 % in China.5

DR is a major cause of vision loss and blindness. Global vision loss occurs through the growth of new vessels, leading to intraocular haemorrhage and, in some cases, retinal detachment. Central vision loss is due to localised damage to the macula/fovea of the eye3 as occurs in diabetic macular oedema (DMO) when the macula swells as fluid accumulates. DMO leads to vision loss and blindness in around 20 % of patients with DR.5 These rates are set to rise, with diabetes set to increase to in excess of 592 million within the next 25 years.1

Numerous physiological and molecular factors, including angiogenesis, inflammation and oxidative stress, are involved in DMO pathogenesis.6 At early disease stages, vascular endothelial growth factor (VEGF) is a major factor in driving retinal changes whereas in chronic diseases, such as DMO, heightened inflammation plays a more important role.7,8 Multiple inflammatory cytokines, such as interleukin (IL)-1β, IL-6, IL-8, monocyte chemoattractant protein-1 (MCP-1), interferon-gammainducible protein (IP-10) and VEGF, are upregulated as the severity of DR increases.9 DMO is multi-factorial disease and steroids can provide an effective therapeutic option as they target multiple factors in DMO.10

ILUVIEN is an intravitreal implant containing 190 μg of fluocinolone acetonide (FAc implant). It measures 3.5 mm in length and 0.37 mm in width, and is injected into the vitreous cavity using a 25-gauge needle. The implant releases 0.2 μg/day of fluocinolone acetonide.11 FAc implant is a multi-factorial therapy that offers continuous low-dose therapy for up to 36 months with a single injection.12 The efficacy and safety of FAc implant has been examined in the Pharmacokinetic and Efficacy Study of Fluocinolone Acetonide Implants in Patients with DMO (FAMOUS) and Fluocinolone Acetonide for Diabetic Macular Edema (FAME) clinical trials.12–15 Based on the clinical trial evidence, FAc implant is indicated for treatment of visual impairment due to chronic DMO that is considered insufficiently responsive to available therapies. FAc implant was launched in the UK and Germany in early 2013 and is currently licensed in the UK, Germany, Austria, France, Portugal, Spain, Italy, Norway, Sweden and Denmark with licences pending in several other European countries. Described here, to the best of the author’s current knowledge, is the first case study reporting the UK of the effectiveness of the FAc implant in a patient in whom therapy with ranibizumab did not result in sustained improvements in terms of visual outcomes and foveal thickness.

A 68-year-old, white female with type 2 diabetes who had been diagnosed 18 years prior to presentation. She was diagnosed with DMO in the right eye (RE) on 1 October 2008, when visual acuity (VA) was 6/6 in both eyes, and in the left eye (LE) on 20 October 2010. The patient’s DMO was managed with macular laser alone to the RE, and initial macular laser to the LE followed by a single intravitreal triamcinolone acetonide (IVTA). On 2 February 2012, she underwent phacoemulsification and intraocular lens implantation in the LE combined with 4 mg IVTA to treat cataract and recurrent DMO. Table 1 summarises the main data relating to the treatment history of this patient as well the responses of VA, central macular thickness (CmT) and intraocular pressure (IOP).

On 24 September 2012, the patient was admitted into the MATISSE trial, in which patients received six monthly injections with the 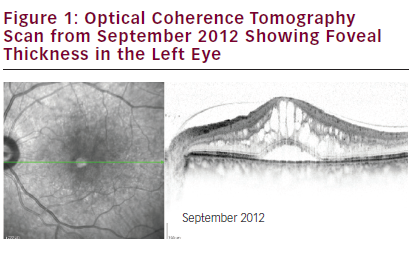 small-interfering RNA (siRNA) agent PF-04523655 and ranibizumab or PF-04523655 alone (see Figures 1–3). Major inclusion criteria for this trial were VA in the study eye ≤20/200 and low VA is the result of an irreversible condition affecting the posterior segment of the study eye. On 24 September 2012, vision was recorded as 6/5 RE and 6/30 LE, with a CMT of 805 μm LE. The patient received five injections of combination therapy that started 8th October 2012 and six further injections with ranibizumab alone that started 6 June 2013. 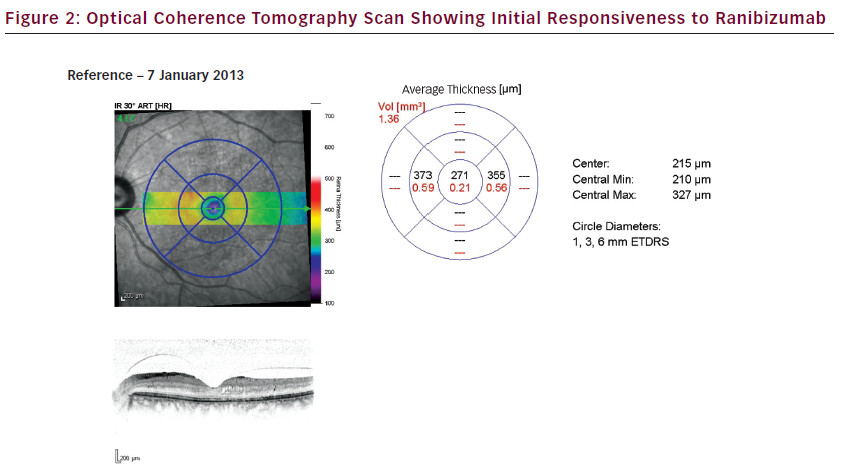 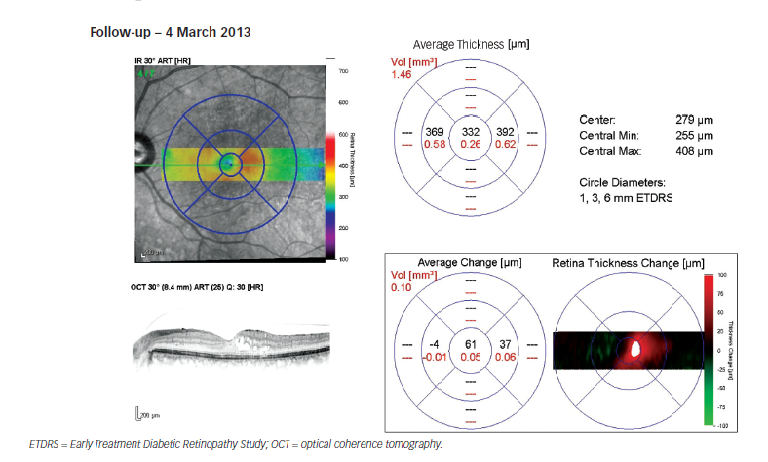 Upon exiting the 6-month trial, the treating physician applied for funding of additional ranibizumab treatment (i.e. prior to approval by the National Institute for Health and Care Excellence [NICE] technology appraisals [TA301]16) and the patient received six further ranibizumab injections between June 2013 and January 2014 with approximately 6-week intervals between injections. In total, the patient had received 11 injections of ranibizumab in the LE between October 2012 and January 2014 (i.e. over a 16 month period). The patient was assessed in the interim, in September 2013, at which time CMT had improved slightly (i.e. 451 μm). However, vision had declined to 6/36 in the LE.

The patient then presented to the clinic 52 days, after the sixth ranibizumab injection, on 3 March 2014. Her LE VA was 6/24 and CMT was 774 μm. As the DMO had remained refractory to a course of 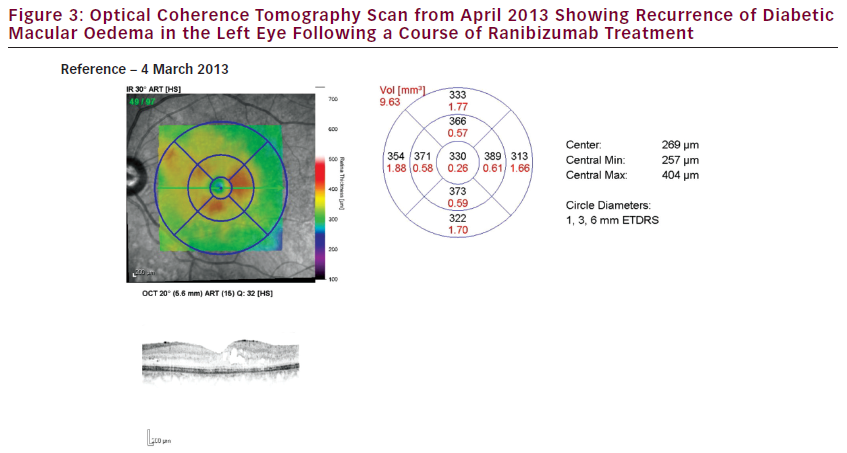 ranibizumab treatment, she was listed for FAc implant injection in the LE and this was conducted 18 days later.

IOP remained within normal limits, no elevations were observed and the patient was not commenced on IOP-lowering therapy. IOP was 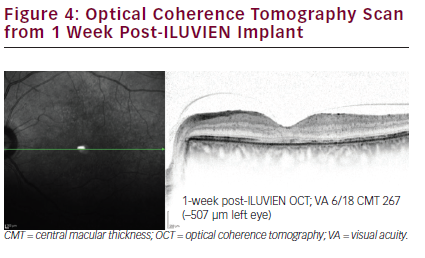 unchanged in the 6 months following FAc implant – measuring 17 mmHg prior to FAc implant and 17 mmHg after 3 months.VA in the LE has improved to 6/12 (a gain of 15-letters) at the time of writing and the patient is being monitored on a quarterly basis.

In this case study, the FAc implant swiftly induced complete regression of DMO in the LE of a patient who had ceased to respond to treatment after multiple anti-VEGF injections. FAc implant also rapidly improved vision by 15-letters and reached a vision of 6/12 after 14 days. After receiving FAc implant, the patient’s vision improved to 6/12 (or 0.5) and achieving this is important to the patient as it is a requirement for a driving licence in the UK.17 This case report includes an extended period of follow-up (6 months) and no IOP changes were identified.

This real-use clinical experience of the FAc implant in a patient who did not show an optimal response to anti-VEGF therapy is in line with the evidence reported in the FAME clinical studies. These studies investigated the efficacy and safety of the FAc implant, and pre-planned subgroup analysis revealed that the relative benefit was most substantial in patients with chronic DMO.15 This is the first report of the FAc implant following prior therapy with anti- VEGF therapy and a siRNA agent. The management of this case study was carried out in accordance with the guidance outlined in the NICE Technology Appraisal 301.16

No side effects of the FAc implant were reported in this case; however, the most common side effects reported in the ILUVIEN Summary of Product Characteristics include cataract operation, cataract, increased intraocular pressure and floaters.11

The FAc implant represents an important treatment option that should be considered in a patient who is not responding to anti-VEGF therapy. In such patients, treatment with FAc implant should not be delayed, as the ultimate goal of any treatment for DMO is consistent reduction of oedema to regain and maintain functional benefit. The ideal candidates for intravitreal fluocinolone acetonide are pseudophakic patients with DMO refractive to laser photocoagulation and anti-VEGF therapy

Fahd Quhill has attended advisory boards and speaker engagements and has been remunerated for these by Alimera Sciences.

Compliance with Ethical Guidance: Procedures were followed in accordance with the responsible committee on human experimentation and with the Helsinki Declaration of 1975 and subsequent revisions. Informed consent was received from all patients involved in the study.

Editorial assistance was provided by Catherine Amey at Touch Medical Media. I also thank my Consultant Ophthalmic colleagues, Chris Brand and
Nachi Acharya, who contributed to the management of this case.