I ntroduction: The design of the study was to look consecutively at what are the prime influences on enhancements in laser vision correction related to the perioperative environment. Methods: A prospective consecutive series of 4,079 cases was reviewed from a single surgeon at a single surgical site. Patients were followed prospectively and were only included after at least two years of postoperative follow-up. Results: The series ranged in primary treatments of spherical equivalents (SE) from 0 to -12 diopters (D) with up to 4 D of cylinder. The preoperative average SE was -4.59±2.79 D and the cylinder average was -0.90±0.90 D. Uncorrected visual acuity (UCVA) prior to the enhancement was 0.63±0.23 (20/32) and post-enhancement was 0.99±0.20 (20/20). The top four influences on enhancements were presence of an opaque bubble layer (31.00%); dry eye disease (27.60%); history of ocular allergy (24.10%); and poor fixation (17.10%). Patients could have more than one of the above influences. Conclusions: Laser platforms, outcomes analysis, nomograms, and other influences will be discussed to help produce enhancement rates below 1.00%, which for this series was 0.71% overall.

This research is primarily focused on the influences on enhancements in laser vision correction during the perioperative period. As surgeons we always strive to enhance technology while trying to improve outcomes. However, this study was a prospective look at what influences enhancement rates from a surgical technique, an intraoperative suite, or associated findings in patients. This study focused on associated influences in patients treated. The study group included a total of 4,079 consecutive cases, with 29 cases requiring enhancements (see Figure 1). The data for this study were prospectively collected from 2011 to 2013 and analyzed after at least two years of follow-up through 2015. Recent studies reported additional influences on myopic laser vision correction with the primary treatment being laser assisted in situ keratomeilusis (LASIK). In a study by Kruh et al., increased retreatment rates were seen with age >40 years old, initial manifest refraction spherical equivalent (MRSE) of -3.00 diopters (D) and astigmatism >1.00 D. In this particular report the enhancement rate was >5%.1 Kashani et al. have shown that retreatments of laser vision correction have favorable outcomes with respect to safety, predictability and efficacy.2 Our study primarily focused on perioperative variables and their influences on retreatments of laser vision correction.

Purpose
The design of the study was to look at the prime influences on enhancements in laser assisted in situ keratomeilusis (LASIK) in a prospective fashion from one surgeon at one center with control of as many variables as possible. Patients were followed for at least two years prior to being included in the series. Influences on perioperative outcomes were evaluated in a series of patients and the findings are reported.

Methods
There were 4,079 cases in total included in the prospective series, with 29 of those cases needing enhancements. The cases that were used for this study were collected prospectively from The Laser Eye Center©, Greensboro, between 2011 and 2013. All surgeries were performed by a single surgeon (Karl Gene Stonecipher). All flaps were created with either a WaveLight® FS200 Femtosecond Laser (Alcon, Novartis, Fort Worth, Texas, US) or IntraLase® FS Laser (AMO Abbott, Santa Ana, California, US). All of the treatments were performed with a WaveLight® Allegretto Wave® Eye-Q excimer 400 Hz laser (Alcon, Novartis, Fort Worth, TX, US) using a wavefront optimized treatment profile. Humidity was controlled between 45–50% and temperature was controlled between 65–70 degrees Fahrenheit using a Liebert® System for the operative suite (Emerson Power Network, Columbus, Ohio, US). Nomograms were created using Internet Based Refractive Analysis (Zubisoft, Switzerland). 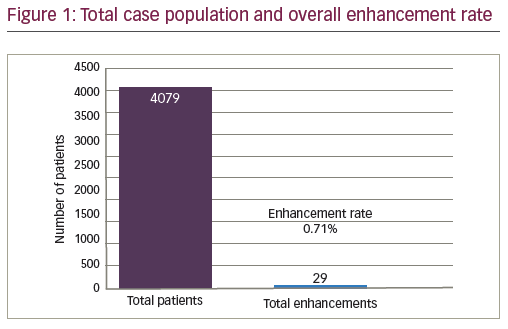 Discussion
There have been multiple articles written which debate influences on enhancement rates such as age, preoperative-refractive error, corneal thickness, dry-eye disease, meibomian gland disease, and others. Common themes include higher initial correction of sphere and cylinder, age, and environment.1–4 In our study, the top influence of OBL makes sense from a technological perspective. Incoming pulses hitting the structurally altered tissue can result in varying rates of ablation. This influence would be similar to corneal neovascularization and subsequent blood blocking the incoming laser pulse. Ocular surface disease and allergy would probably influence healing postoperative related to inflammation and corneal remodeling. Whereas corneal fixation is related to incoming laser pulses not being placed appropriately despite a robust tracking mechanism. Thyroid disease, tear film debris, and the use of isotretinoin preoperatively would mostly fall in to the category of ocular surface disease and if we include this as a lump process then the number one influence on enhancements would be untreated or poorly treated ocular surface disease. A nice review of ocular surface disease was written by Albietz et al., and they concluded that optimizing the ocular surface before, during, and after laser vision correction or LASIK can influence and enhance outcomes. Problems related to the tear film, they concluded, are common and surgeons should use evidence-based strategies to help control this disease process for better patient results.5

Conclusion
In the present study, we observed that OBL was the number one influence in patients receiving enhancements. We theorized that the bubbles alter the placement of incoming pulses and reduce their overall effect. The next observation was the influence ocular surface disease has on enhancement rates. We observed isotretinoin, thyroid disease, and tear film debris could be associated on influencing ocular surface disease and may in fact push 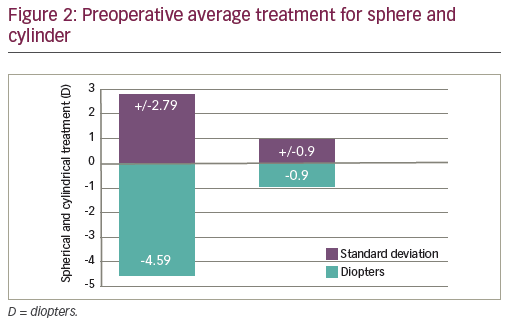 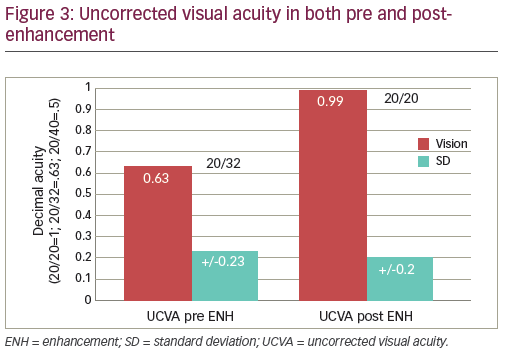 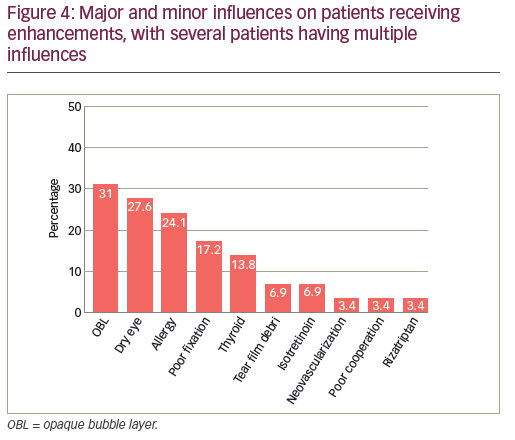 ocular surface disease to the top of the list. It would be hard to quantify this to a statistical degree when looking at only 29 patients. However, with current technology enhancement rates below 1.00% are commonplace with proper nomograms and data analysis. In some patients there were multiple influences observed and the statistical analysis of patient outcomes is challenging so we chose to list the associations as we have done. Ocular allergy was seen in 24.10% of the cases but could be related to the region of the patients treated. Allergy is a common ocular complaint in the Piedmont Region of North Carolina, US and in fact it ranks among the top 20 areas in the country for allergy related issues as reported for 2016 from the Asthma and Allergy Foundation of America. Trying to associate this finding with other regions could potentially vary.6

Poor fixation and poor cooperation were also seen as an important influence, but less so than other influences seen. However, this makes sense as patients who are more challenging to operate on require more time with the flap retracted and influences of dehydration of the stromal treated surface come in to play.7 We also observed that neovascularization could mean that part of the treatment was blocked from the bleeding despite clearing the area as was typically of the surgeon’s technique. In addition, we observed that rizatriptan, which appeared in 3.40% of the cases, was another association although we have no real evidence to support a reason behind it. Mulhern et al. showed that the myopic treatments are less likely to need an enhancement compared to hyperopic treatments.8 Hu et al. confirmed previous findings of age and preoperative sphere as influential, yet they also add the predictive formula which the surgeon used, to be a significant factor.9 In this study that would not have been an influence because it was a single surgeon study. Interestingly, Randelman et al. reported a series of 855 eyes in 2009 with an enhancement rate of 6.3% had no significant differences in retreatment rates related to age, sex, eye, level of myopia, photorefractive keratectomy (PRK) versus LASIK, room temperature, room humidity, month or season of primary surgery. The only significant findings were degree of hyperopia and level of astigmatism.10 Jin et al. showed that retreatments of previous conventional and wavefront guided LASIK with conventional LASIK is safe, effective, and predictable for both previous treatments with wavefront-guided or standard myopic LASIK.11

Saeed et al. showed that visual and refractive outcomes of LASIK retreatments remained stable up to four years after enhancement surgery.12 Schallhorn et al. recently looked at a series of 290 eyes divided into two groups A and B of either lift flap LASIK enhancement (A) or PRK over LASIK (B) and found that when the flap can be lifted, better outcomes at the 20/20 level are achieved (87.4% versus 79.5%). With regard to safety, lift flap LASIK enhancements produced issues with epithelial ingrowth that required intervention in 1.7% of the cases and PRK over LASIK produced grade 1 or less haze in 5.3% of the cases but all resolved within six months postoperatively.13

Finally, our study showed that the top four influences on patients receiving enhancements were as followed: OBL (31.00%), dry eye disease (27.60%), history of ocular allergy (24.10%), and poor fixation (17.10%). The range of treatment had an SE of +0.75 to -12.10 D and a cylinder of 0.00 to 4.00 D. At these ranges of treatment, as surgeons, we are always trying to improve technology and techniques but at the same time we must analyze the data to look at ways to continually improve our outcomes. It was seen in our study that post-enhancement patients did well, with 93.00% seeing 20/25 uncorrected visual acuity. Efficacy, safety and predictability were all outstanding in this study which illustrates enhancements of laser vision correction allow us to provide patients with the ability to improve their results when their expectations are not met. The authors believe even with a 0.71% enhancement rate in this group of cases results can be improved when paying attention to perioperative influences and nomogram development.

Megan Stonecipher has nothing to disclose in relation to this article. Karl Stonecipher is a speaker, consultant and researcher for the following companies: Abbott Medical Optics, Alcon, Allergan, Alphaeon, Bausch and Lomb, Laser Defined Vision, Nidek, Physicians Protocol, Presbia, Refocus, Shire, TLC. No funding was received in the publication of this article.
Compliance with Ethics:All procedures were followed in accordance with the responsible committee on human experimentation and with the Helsinki Declaration of 1975 and subsequent revisions, and informed consent was received from the patient involved in this study. The design of the study was to look at the prime influences on enhancements in laser in situ keratomeilusis in a prospective fashion from one surgeon at one center with control of as many variables as possible.

Excess corneal astigmatism can cause visual aberrations, resulting in symptoms of glare, starbursts and halos. Astigmatism has long been difficult to correct with refractive laser surgery. The challenge has been to maximally reduce both corneal and refractive astigmatism while ensuring that any remaining corneal astigmatism is regular, symmetrical and orthogonal, with a typical ‘bow-tie’ topography.1 However, […]