Studies suggest that dry eye disease (DED) can have a considerable impact on visual function, daily activities, social and physical functioning, workplace productivity, direct and indirect cost of the disease, and quality of life. Some psychological and mental health issues such as sleep disorders, anxiety, depression and mood disturbances have also been shown to be triggering factors for DED, thus indicating a mutually reversible relationship between DED and mental health status. Mental health and DED have a possible relationship which has not been duly explored. This study was conducted on patients attending the Department of Ophthalmology, Era’s Lucknow Medical College, Lucknow, India. Informed consent was obtained from all study participants. Personal and family history and ocular symptoms, with emphasis on symptoms associated with DED, were recorded. Complete ocular examination was done based on ocular symptoms: they were graded on ocular surface disease index (OSDI), Schirmer’s test (without anaesthetic) and tear-film break-up time (TBUT) test. All the patients were subjected to general health questionnaire (GHQ)-12 to evaluate and categorise mental health status. The study group consisted of 125 patients diagnosed with DED and an equal number of demographically matched individuals with no symptoms of DED as controls. The mean age of patients with DED was 34.58 ± 0.31 years, whereas the mean age of controls was 34.61 ± 3.38 years. The majority of DED cases (69.6%) and controls (64.0%) were female. There was a statistically significant difference between mean values for Schirmer’s test and TBUT between the DED and control groups (p<0.001). Mean OSDI values were significantly higher in cases (58.21 ± 19.77) as compared to that of controls (23.55 ± 7.69) (p4, indicating emotional disorders or poor psychological wellbeing. For all these disorders, the prevalence was significantly higher in patients with DED compared to controls (p<0.05). Among patients with mild, mild to moderate and moderate to severe DED, prevalence of a psychiatric disorder was 23%, 97% and 100%, respectively (based on Schirmer’s test). DED was associated with psychiatric disorders with a decrease in mental health state as the severity of DED increased.

Twenty-five percent of patients who visit ophthalmic clinics report symptoms of dry eye and it is one of the most common conditions seen by eye care practitioners.1 Approximately two-thirds of patients affected by dry eye disease (DED) are female and elderly,2,3 and there is a higher risk in postmenopausal women.4 The occurrence of severe forms of DED is reported to increase with age and almost 8% of women and 4% of men over the age of 50 years have more severe DED.5,6 The prevalence rates of DED have been shown to vary substantially across different geographical regions.7–13

Epidemiological studies of Indian populations report prevalence rates of 9.5–370/1,000 for psychiatric disorders.14 The chronic discomfort observed in patients with DED may also have a negative impact on other aspects of patient health, such as cognitive processes, mood and mental health.15 When quality of life is affected, a patient’s psychological wellbeing is also affected, leading to initiation of mental imbalance. Some psychological and mental health issues such as sleep disorders, anxiety, depression and mood disturbances have also shown to be triggering factors for DED,16,17 thus indicating a mutually reversible relationship between DED and mental health status. Additionally, drug intake for mental health disorders may contribute to DED.18

In recent years, a number of researchers from western countries have investigated the impact of DED on psychiatric wellbeing in large retrospective epidemiological studies.19,20 These studies, in general, have shown a positive association between DED and psychiatric comorbidities. Incidentally, there are almost no studies from developing countries, particularly India, on this issue. The purpose of the present study is to address the dearth of research on mental health status and DED in developing countries.

Study participants were split into two groups: those diagnosed with DED and a control group with no diagnosis or symptoms of DED. All observations were conducted at the Department of Ophthalmology, Era’s Lucknow Medical College, Lucknow, India. Exclusion criteria included DED due to ocular pathologies, hypertension, diabetes mellitus, dysthyroidism, smoking, any drug intake for more than 3 months and any radiation therapy or surgery in the past 3 months. Users of computers and smart phones for more than 8 hours daily were also excluded as device use can contribute to the development of DED and may confound the study.21,22 A detailed history regarding ocular symptoms, with emphasis on symptoms associated with DED, was obtained from all subjects included in the study. Informed consent was obtained from all study participants. Tear production grading and ocular symptoms were measured using three tests: Schirmer’s test, tear-film break-up time (TBUT) test and ocular surface disease index (OSDI).23,24

A specialised Schirmer’s strip was prepared from Whatman™ filter paper (GE Healthcare Life Science, Chicago, IL, US) measuring 40×5 mm, graded 0–35 mm. A 5 mm strip was folded and placed in the lower fornix at the junction of medial 2/3 and lateral 1/3, and time noted. Extent of wetting of the strip was noted after 5 minutes. Wetting of less than 15 mm was regarded as effective tear production. Grading of tear production was as follows: normal = ≥15 mm, mild = 9–14 mm, moderate = 4–8 mm, severe = ≤4 mm.

Fluorescein strip was used to stain the eye. The patient was asked to blink three or four times to distribute the dye in conjunctival sac and was then asked to look straight ahead and not to blink. The eye was scanned using slit lamp under cobalt blue light; the first area of tear film rupture, manifested by the appearance of a black island within the green film of fluorescein, was noted. TBUT was the time, in seconds, between the last blink and the appearance of a dry spot on cornea categorised as: normal = >10.0 seconds, mild = 6.1–10.0 seconds, moderate = 3.1–6.0 seconds, severe = ≤3 seconds.

All study participants were subjected to general health questionnaire (GHQ)-12 to evaluate and categorise mental health status.26,27 A GHQ-12 score of ≤3 is considered normal, and these patients would require no further evaluation. A score of ≥4 is considered abnormal and requires further patient evaluation for psychiatric disorders.

A total of 125 patients fulfilled the inclusion criteria and had a diagnosis of DED. Another 125 healthy volunteers were recruited as a control arm. The mean age was 34.58 ± 0.31 years in the DED group and 34.61 ± 3.38 years in the control group. There was no significant difference in age between the two groups (p=0.820). The majority of participants in the DED group, as well as the control group, were female (69.6% and 64.0%, respectively). There was no significant difference between the groups with respect to gender (p=0.347). Baseline characteristics are provided in Table 1. 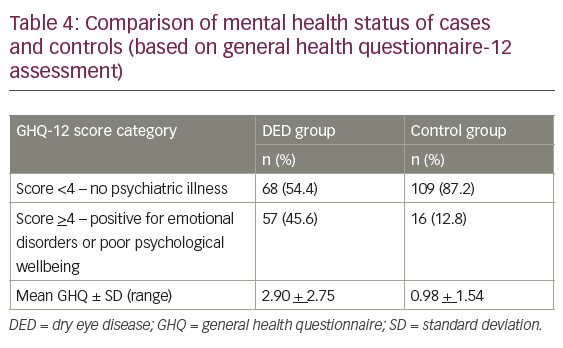 OSDI grade. Statistically, there is a significant difference between the two groups with respect to OSDI grade (p<0.001) (Table 3).

Using the GHQ-12 inventory a total of 57/125 participants in the DED group (45.6%) and 16/125 in the control group (12.8%) had scores of >4, indicating emotional disorders or poor psychological wellbeing (p<0.001) (Table 4). In the DED group, prevalence of psychiatric disorder was 23% for patients with mild DED, 97% for those with moderate DED and 100% for those with severe DED (based on Schirmer’s test). The incidence of psychiatric disorders was significantly higher for those with moderate and severe DED as compared to mild (p<0.001).

In the present study, we made an attempt to evaluate the association between psychiatric disorders and the severity of DED. Using Schirmer’s test and GHQ-12 to quantify the severity of DED and mental wellbeing, respectively, we found that only 23% of patients with mild DED experience psychiatric comorbidity, whereas those with moderate and severe DED had a significantly higher risk of psychiatric comorbidity (97.0% and 100.0%, respectively). When looking at the DED group as a whole, the results presented here indicate a significantly higher prevalence of psychiatric illness in people with DED compared to healthy controls (45.6% versus 12.8%, respectively). We chose to use the GHQ-12 as it is a well-known clinical instrument for measuring psychiatric disorders27 and is more specific to the needs of study.

Like other epidemiological studies, where females can account for up to two-thirds of the study population,2–6 females made up the majority of participants in the present study. In order to rule out the impact of age and gender, we purposely selected controls with matching age and gender.

The findings of present study provide useful information regarding psychiatric impact of DED in a relatively young population. This is the first study the authors are aware of to explore this relationship in an Indian population. This study, in general, supports the existing literature that a significant association between DED and psychiatric morbidity burden is present, while at the same time providing some newer information suggesting that the relationship between severity of DED and psychiatric comorbidity should not be viewed as a linear one and should be interpreted in context with the stage of disease, and more so in different life stages of the patient. To validate the findings of our study, further research is recommended in view of the fact that this is probably the first study in an Indian and relatively younger population.

Luxmi Singh, Vijay Pratap Singh,
Swati Yadav and Pragati Garg have nothing
to disclose in relation to this article.

Double-blind peer review.
Compliance with Ethics: All procedures were followed
in accordance with the responsible committee on human
experimentation and with the Helsinki Declaration of
1975 and subsequent revisions. Informed consent was
received from the patients involved in this study.

No funding was received for
the publication of this article.

This article is published under the
Creative Commons Attribution Noncommercial
License, which permits any noncommercial
use, distribution, adaptation, and reproduction
provided the original author(s) and source are
given appropriate credit. © The Authors 2018. 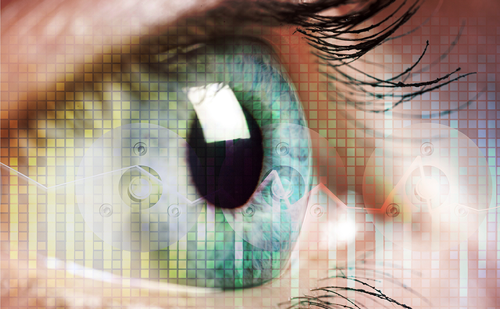 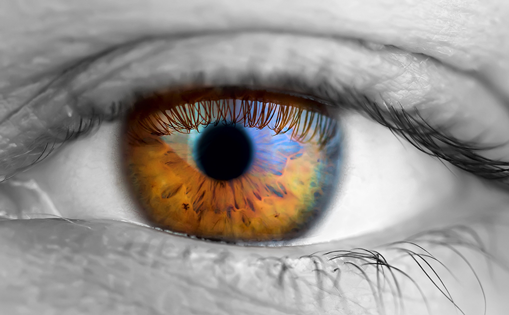