Uveitis is an umbrella term for a large group of ocular inflammatory diseases classified anatomically into four main groups: anterior, posterior, intermediate, and panuveitic. Based on two epidemiological studies in Europe, the prevalence of uveitis is estimated to be 17 per 100,000, which is comparable to the US.1,2 Uveitis patients are estimated to account for more than five million eye clinic visits per year, and the direct medical costs of uveitis in the US are estimated to be more than $117 million annually.3 Despite the low prevalence of uveitis, it accounts for 10% of all blindness cases globally.4 From clinical records it has been estimated that 60–80% of uveitis cases occur in patients in the third to sixth decade of life with a mean age of occurrence of 35.5 The majority of adult uveitis sufferers will experience pain often accompanied by red eye, while uveitis in children is largely asymptomatic and can go undetected for long periods. When diagnosed, uveitis is differentiated from other inflammatory eye conditions on the basis that inflammation occurs inside the eye, in the choroid of the iris, in the choroid, in the retina, or in the retinal blood vessels. The main treatment objective for uveitis is to eliminate inflammation and prevent recurrence of uveitis without long-term dependency on drugs. Reduction in inflammation is crucial if secondary complications and irreversible visual loss are to be avoided.

Causes and Risk Factors of Uveitis
Uveitis can be caused by both infectious and non-infectious factors. The most common infectious cause of posterior uveitis in immunocompetent patients is toxoplasmosis, which can be easily diagnosed through the presentation of a retinochoroidal inflammatory lesion.6 In immunocompromised patients, cytomegalovirus is the most frequent infectious cause of uveitis and occurs regularly in AIDS patients with a low CD4 T-cell count.7 Additionally, anterior, posterior, and intermediate uveitis have been linked to microbes such as syphilis and herpes.8,9 From a non-infectious aspect, the human leukocyte antigen (HLA)-B27 gene is associated with 40–50% of patients with anterior uveitis and indicates a less favorable prognosis.10,11 Moreover, irritable bowel disease (IBD) is linked to a high prevalence of ocular inflammation: 66% of patients with the disease tested positive for the HLA-B27 gene.12 However, the gene’s presence does not always cause ocular inflammation; therefore, it is not an appropriate marker to determine the risk of ocular problems.

There are several autoimmune diseases that cause inflammation of specific parts of the eye. Approximately 6% of uveitis cases occur in children under the age of 16 years, of which 41% are linked to juvenile idiopathic arthritis (JIA), a childhood chronic arthritis disease.13,14 Other autoimmune diseases associated with uveitis include sarcoidosis, birdshot retinochoroidopathy, Fuchs’ heterochromic iridocyclitis, and Vogt-Koyanagi-Harada. However, it is rare for an ophthalmologist to associate non-infectious ocular inflammation with an autoimmune disease. In the majority of cases, non-infectious uveitis remains idiopathic and inflammation is located entirely within the eye.

Treatment Options
Treatment of uveitis depends on the cause of the inflammation. For example, treatment is straightforward in infectious uveitis cases if the known cause of uveitis is syphilis, so antimicrobial therapy is always administered. If the known cause is herpes, antiviral medication is prescribed. However, the majority of uveitis cases are non-infectious and idiopathic and are treated primarily in a stepped approach starting with topical steroids and adding oral non steroidal anti-inflammatory agents in recurring uveitis. In the event that the aforementioned strategies do not stop inflammation, steroid sparing immunomodulatory therapy and biological response modifiers (BRMs) can be introduced.

Corticosteroids Corticosteroids have been universally used for uveitis since their introduction in the 1950s and constitute the first-line treatment option once an infectious etiology has been excluded. Corticosteroids can be administered via eye drops, by injections into or around the eye, or systemically by injection or oral medication.

Topical corticosteroids are highly effective at reducing ocular inflammation rapidly; however, they have been linked to a rise in intraocular pressure (IOP).15 If left untreated, high IOP can cause blindness, and treatment of this condition is a further drain on medical resources. The more potent steroids are the most effective, but cause the highest increase in IOP. In addition, prolonged use of steroid eye drops inevitably leads to the formation of cataracts. Therefore, the long-term use of topical steroids to treat chronic or recurrent uveitis is not advised. Side effects are also encountered with the use of systemic corticosteroids, particularly in cases of long-term and recurrent uveitis. Extended use of systemic corticosteroids has long been associated with high blood pressure from sodium and water retention, cardiac failure, severe weight gain, osteoporosis, myopathy, osteonecrosis, and gastrointestinal side effects.16 Long-term use of steroids always causes at least one of these side effects, and in some cases can be life-threatening. Hence, throughout a course of steroid use for uveitis the dose should be tapered to a minimum and, eventually, dicontinued. Short courses of topical steroids, even with the addition of systemic steroids, are ineffective in 30% of children with JIA uveitis.17 Repeated peri-ocular steroid injections are required in some cases to control inflammation. However, the long-term use of corticosteroids has overwhelming negative effects on a child’s growth and bone formation. Therefore, appropriate use of steroid-sparing agents is critical in the care of recalcitrant uveitis in children.

Improvements for Steroid Delivery
Intravitreal fluocinolone acetonide (FA) implants have been tested in patients with chronic non-infectious posterior uveitis in order to improve the mechanism of delivery of corticosteriods and to reduce recurrence of uveitis. The implants are placed surgically into the vitreous cavity. In one study, implants were found to significantly reduce the recurrence of uveitis over a 34-week period in comparison with topical corticosteroid treatment.18 As expected, the most common side effect was an increase in IOP and cataract progression. Trials will continue for another three years to assess the longter efficacy and safety of the implant.

Surgical complications are also problematic in patients with implants and include cataract formation, choroidal detachment, a temporary decrease in visual acuity, endophthalmitis, increased IOP, retinal detachment, vitreous hemorrhage, and wound dehiscence. The implants are particularly effective in patients with chronic, moderate to severe, non-infectious, posterior ocular inflammation with a low risk of intraocular hypertension and for those who have had poor tolerance to topical and systemic corticosteroids. In patients who are suitable, the implant will reduce the need for adjuvant therapy and improve overall visual acuity.

Steroid-sparing Treatments
Immunomodulatory agents are employed in chronic and recurrent uveitis, where steroids are contraindicated or have become ineffective. Antimetabolites, T-cell inhibitors, and alkylating agents are all immunomodulators that are used to treat uveitis. One study examining the antimetabolite drug methotrexate in children with JIA uveitis concluded that the drug is effective in controlling inflammation, but that additional topical steroids were required to completely eradicate ocular inflammation.19 Another long-term trial of the drug revealed no serious adverse side effects and showed that methotrexate can replace steroids in 56% of patients.26 Data on all immunomodulatory agents are limited to a clinical basis with no placebo group for comparison, so the extent to which they cure uveitis is still unclear.20–22

More recently, BRMs have been employed for treatment of autoimmune ocular inflammation. These target specific elements of the immune system such as tumor necrosis factor alpha (TNFα), which has been shown to play an important role in uveitis.23,24 In the short term, side effects of using a TNFα blocking agent were minimal and positive results were seen in the majority of uveitis cases in children. However, in one trial several patients on a 50- week course of TNFα blockers had serious side effects, which included druginduced lupus, congestive heart failure, vitreous hemorrhage, and pulmonary embolus.25 This suggests that only a small percentage of candidates are suitable for TNFα treatment long term, and some patients may be more susceptible to the treatment’s toxicology. Therefore, the data available on TNFα show promise in terms of its use in short-term autoimmune uveitis; however, its niche in uveitis therapeutics needs further definition. Pars plana vitrectomy has also been examined as a treatment option for chronic uveitis.26 A comparison between patients undergoing medical treatment with systemic corticosteroids and/or immunosupressants with those undergoing pars plana surgery demonstrated that after a six-month follow-up, the surgery group had a significant improvement in visual acuity compared with a marginal improvement seen in the medical group. Hence, the study suggests vitrectomy may provide an enhanced visual outcome in patients with uveitis. This is the first study examining the use of pars plana vitrectomy on uveitis and, therefore, more evidence is required before it can be viewed as a positive therapy option.

Future Research Considerations
Uveitis still remains ill-defined at the clinical level, which has prevented regulatory authorities from making decisions on the licensing of new treatment modalities. There is disagreement about whether a general approach to treatment should be developed for intraocular inflammation as a single condition, or whether specific therapies should be designed for each clinical aspect. As a result, most newly developed immunosuppressant drugs are prescribed off-label. Investigation into the immunological mechanism in patients with uveitis will shed light on the mechanisms of autoimmunity and provide support for the use of immunology.

Summary
The majority of uveitis cases are idiopathic, although in some cases the origin is known. The main infectious risk factors for uveitis include: toxoplasmosis, cytomegalovirus, herpes, syphilis, and sarcardosis. Noninfectious causes are the positive presence of the HLA-B27 gene, IBD, and, in children and adolescents, juvenile idiopathic arthritis. For 50 years, corticosteriods have been the first-line treatment for all types of ocular inflammation, although it is now apparent that their long-term use in chronic or recurrent uveitis leads to serious inescapable side effects. Therefore, there is a need for replacement treatment options for these conditions. Immunomodulatory agents, BRMs such as anti-TNFα, and pars plana vitrectomy have all been demonstrated to be effective in the treatment of uveitis. However, none of these therapies has undergone longterm, double-blind, placebo-controlled testing, making their future in the treatment of uveitis unclear. 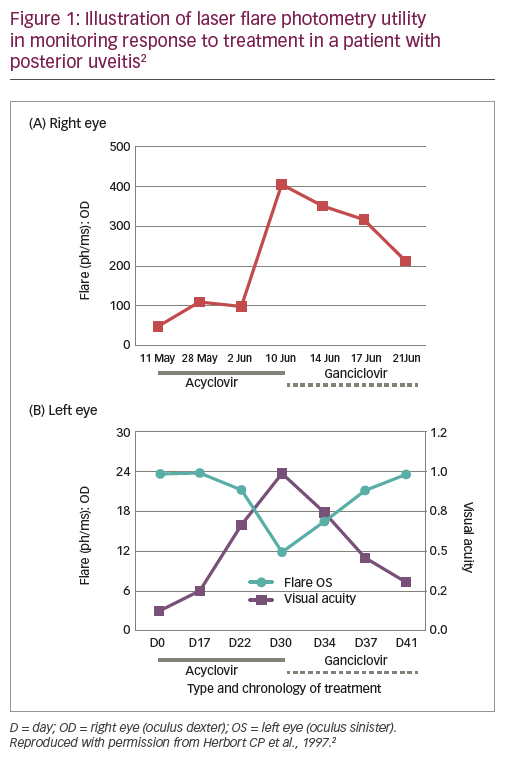 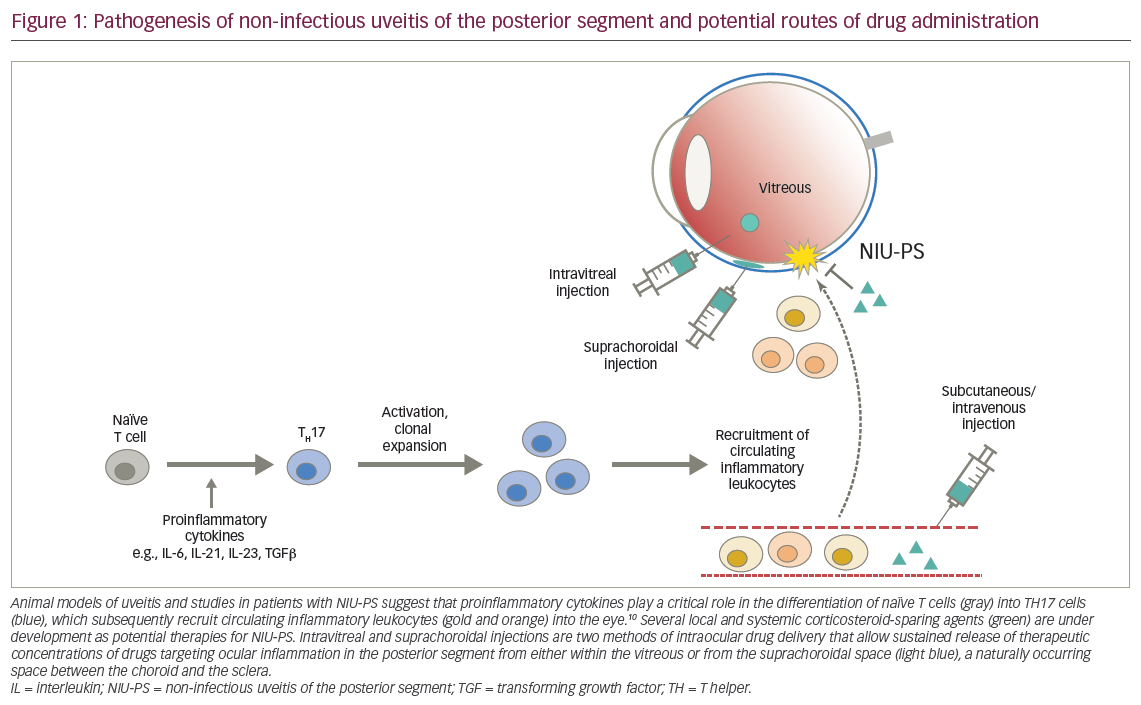 Uveitis comprises a range of intraocular inflammatory conditions of both infectious and non-infectious origin that can result in irreversible ocular damage and impaired vision or blindness.1 Effective management is therefore vitally important to prevent ocular damage and preserve visual acuity and quality of life.1–3 Therapeutic management of uveitis is dictated by etiology and anatomic location.1 […] 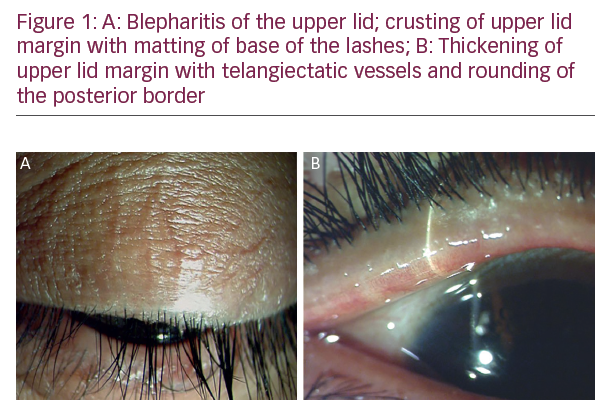 Ocular rosacea is a chronic inflammatory disorder which may present in various manifestations such as chronic blepharoconjunctivitis, meibomian gland dysfunction, corneal vascularization, infiltration, scarring and, albeit rarely, even perforation. In nearly half to two thirds of cases it has been reported to occur in association with acne rosacea, a disease characterized by transient or persistent […]

Trending In Uveitis and Ocular Immunology: