The vitreoretinal interface is a complex structure that facilitates the attachment between the internal limiting membrane of the retina and the vitreous, a clear gel filling the posterior of the eye.1,2 As the eye ages, a series of physiological events occurs to the vitreous, including liquefaction, which predisposes the eye to posterior vitreous detachment (PVD).2 PVD is a common occurrence in ageing eyes, developing in 75 % of people over the age of 65.3,4

PVD is exemplified by the complete separation of the posterior hyaloid membrane from the retinal surface; anomalous PVD represents partial detachment, which can lead to further pathological conditions. The normal process of PVD due to ageing may be complicated by the presence of persistent vitreomacular adhesion (VMA), which occurs when the vitreous cortex adheres to the macula after detaching from the surrounding retina.2,3,5 VMA is typically asymptomatic and is not associated with changes to the macular architecture. However, VMA may develop into vitreomacular traction (VMT), if the forces are great enough to cause observable anatomical changes to the macular architecture. This can result in multiple visual disturbances, such as photopsia, micropsia and metamorphopsia, and can potentially exacerbate concomitant retinal conditions, such as diabetic macular oedema and age-related macular degeneration.2,5–7

Strong or chronic VMT during PVD can result in the development of macular holes.8–12 A full-thickness macular hole (FTMH) is a break in the macula that extends through all layers from the internal limiting membrane to the retinal pigment epithelium.5 A FTMH is rated as small (<250 μm), medium (250–400 μm) and large (>400 μm), based on the recent classification from the International Vitreomacular Traction Study Group.13 Nearly half of FTMHs are large at the time of detection/diagnosis.2,13

An important advance in the understanding and treatment of VMT and FTMH was the development of optical coherence tomography (OCT) technology. OCT provides the basis for greater visualisation of vitreomacular anatomy and has allowed for standardisation in the definitions of VMA, VMT and FTMH.13–15 This in turn has provided a more accurate understanding of both retinal anatomy and the pathophysiological processes of VMT and FTMH.2 The importance of this technology is underscored by the fact that focal VMA can be first discovered on routine examination using OCT.5,6,8,16 This provides an opportunity to appropriately manage these cases and follow them properly, and to make a decision on when and how to intervene. Use of OCT and standardisation of definitions and treatment algorithms will aid in the development and timing of appropriate treatments.

One option for managing patients with VMT (also referred to as symptomatic VMA) involves observation,15 or watchful waiting, since spontaneous resolution may occur in some cases, and symptoms may be limited in a number of cases. Spontaneous resolution of VMT has been reported to occur between 11–34 % in published studies.7,17–24 However, follow-up periods were extremely long, exceeding 2 years in some cases, with the possibility of visual decline despite successful resolution.15,24,25

For FTMH, reported spontaneous closure rates are on average much lower (3–11 %).26 Furthermore, most small macular holes progress to medium or large ones,27 and the likelihood of spontaneous closure drops dramatically after the first year, highlighting the need for intervention.15,28 Unlike VMA, extended observation for FTMH is not recommended.

If VMT release does not occur spontaneously, a common and effective treatment option is pars plana vitrectomy.25,29,30 For macular hole closure, vitrectomy is the current standard intervention, with reported macular hole closure rates typically 87.5 % and higher.31–34 High visual acuity (VA) improvement rates following vitrectomy are reported, although improvements may be modest (1–2 lines).25,35 However, vitrectomy patients require recovery from surgery and a period of post-operative face-down positioning. Additionally, cataract surgery is commonly necessary within the first year after vitrectomy for macular hole repair. Vitrectomy has been associated with complications, such as increased intraocular pressure, risk of infection and others.14,28,35–38 This has increased the interest in pharmacological vitreolysis, either in conjunction with vitrectomy or as a stand-alone therapy.1,15

Ocriplasmin Overview and Review of Recent Publications
Ocriplasmin represents a pharmacological treatment option for VMT/ symptomatic VMA.1,36 Ocriplasmin is a recombinant truncated form of human plasmin that has proteolytic activity against fibronectin, laminin and collagen, which are present at the vitreoretinal interface and help anchor the vitreous cortex to the retina.39 Ocriplasmin was approved by the US Food and Drug Administration (FDA) in 2012 after safety and efficacy were established in two phase III clinical trials (MIVI-TRUST 006/007, NCT00781859 and NCT00798317, respectively) involving 652 patients with symptomatic VMA.40 These large randomised controlled trials assessed the efficacy of a single intravitreal injection of ocriplasmin in patients with VMA/VMT (with or without associated FTMH ≤400 μm). A total of 26.5 % of eyes receiving ocriplasmin achieved the primary endpoint of VMA/VMT resolution at day 28 compared with 10.1 % of eyes receiving vehicle (p<0.001).40 These differences did not change substantially at 6 months (26.9 % for the ocriplasmin-treated versus 13.3 % for the vehicle-treated groups; p<0.001).41 Secondary endpoints were also assessed, and showed a higher percentage of ocriplasmintreated compared with vehicle-treated patients achieving total PVD (13.4 % versus 3.7 %), closure of FTMH (40.6 % versus 10.6 %) and improvement of VA ≥3 lines at month 6 (12.3 % versus 6.4 %).40

Following the clinical trials and subsequent FDA approval, 26 studies have reported on the use of ocriplasmin treatment in clinical settings from 2013 to 2015. These studies were conducted to determine how

real-world results would compare with clinical trials with defined patient populations. Reported results largely follow the endpoints of the clinical trials and include rates of VMA/VMT resolution, FTMH closure and change in VA.1,20,26,38,43–45,47–67 Studies ranged in size from 5 to 62 patients; sources include publications in peer-reviewed and trade journals and presentations at national and international congresses. 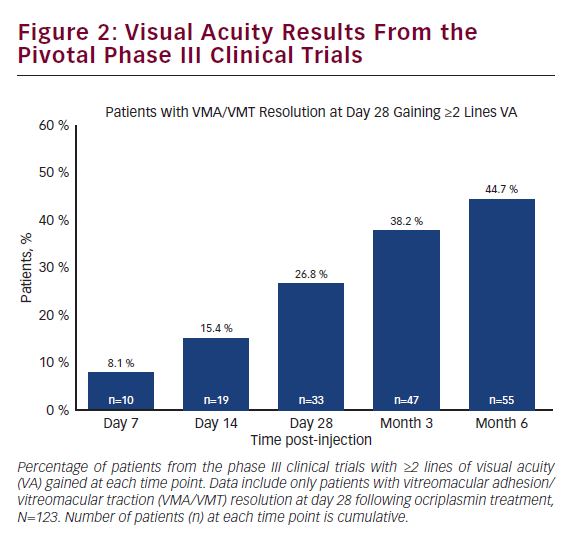 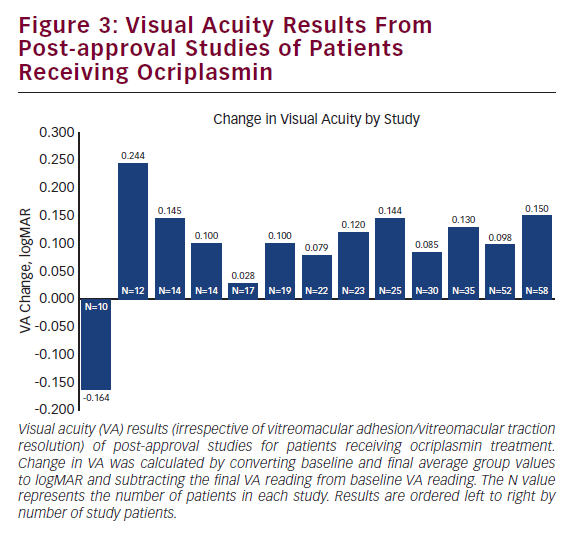 ocriplasmin treatment according to FTMH width at baseline.15,40,42 In addition, the duration of a macular hole has been shown to have an impact on the likelihood of spontaneous closure.28 FTMH closure may be directly related to VMT release; in one study, 81.8 % (9/11) of eyes that did not have hole closure had persistent VMT.26 This suggests that the mechanism of ocriplasmin-induced closure of FTMH may rely on prior VMT release.

Analysis of the results from the two pivotal phase III MIVI-TRUST clinical trials showed that patients receiving ocriplasmin with VMA/VMT release by day 28 (primary endpoint) continued to show improvements in VA over time. By post-injection day 7, 8.1 % of these patients showed a ≥2 line improvement in VA; this number increased to 26.8 % at day 28 and 44.7 % at post-injection month 6 (see Figure 2).

In addition to the 26 published studies, 20 case reports of patients receiving ocriplasmin treatment were published (in 16 articles) from 2013 to 2015.68–83 Case reports provide unique insight into ocriplasmin efficacy. Unlike studies, which have larger patient populations but present VA averages, case reports typically provide many more interim VA points to show progress over time for a single patient. Four cases were excluded due to patients receiving alternative treatment intervention prior to the final VA reading, and one case was excluded because the ocriplasmin treatment was unrelated to VMA/VMT, leaving
15 cases with analysable VA data.68–76,79,80,82,83 Ten of these 15 (66.7 %) reported improved VA results.70,73–76,79,80,83 Patients showing improvement were followed anywhere from 28 days to 15 months. Only three of the five cases not reporting VA improvement provided a follow-up length longer than 9 days. Of these, the longest reported follow-up period was 4 months.71,72,82 Importantly, of the 10 cases reporting VA improvement at the final follow-up, six (60 %) showed interim VA decline.73–75,79,80,83 This suggests that efficacy regarding VA improvement is closely related to the length of time patients are followed and reported on.

Discussion
Three years following the pivotal clinical trials and subsequent FDA approval of ocriplasmin, a more complete picture of ocriplasmin efficacy is beginning to emerge. Real-world efficacy results for ocriplasmin are now available for VMA/VMT resolution, FTMH closure and VA outcomes. Regarding VMA/VMT resolution, 92.3 % (24/26) of studies have now reported efficacy rates higher than the pivotal phase III clinical trials; 88 % (23/26) of these studies reported efficacy results higher than 40 %. Subgroup analysis showed that the baseline predictive factors derived from the clinical trials were validated in real-world studies; all studies (26/26) showed at least one subgroup with higher VMT resolution rates than the overall study average, and the great majority of subgroups consisting of baseline predictive factors outperformed their corresponding subgroups without those factors. Several studies showed further efficacy increases in patients with multiple baseline predictive factors.

Results regarding FTMH closure were more varied, but showed that 41 % (9/22) of studies reported results equal to or greater than those from the clinical trials. Further consideration of the baseline characteristics associated with higher rates of FTMH closure following treatment with ocriplasmin may be needed to define predictive factors. For VA improvement, a majority of studies (66.7 %, 12/18) reported average VA improvement in the study group, with five studies reporting VA improvement in a proportion of patients. The minimum follow-up time for these studies was 28 days. Similarly, 66.7 % (10/15) of case studies reported VA improvement following ocriplasmin treatment despite multiple patients experiencing a temporary VA decrease. Case reports provide valuable insights but need to be analysed collectively. Efficacy is determined by the endpoint; follow-up times varied widely, and VA can improve for more than 1 year. Moreover, short-term VA loss is usually recovered, which may not be captured in shorter followup periods. In addition, bias may exist to report n=1 cases showing unusual clinical circumstances, involving worsening VA outcomes.

Currently, a true direct comparison of ocriplasmin versus vitrectomy would require a randomised controlled clinical trial. However, ocriplasmin may provide an alternative therapeutic option to vitrectomy for suitable candidates. Although vitrectomy is highly effective, patients do experience a treatment burden of being unable to participate in daily activities for up to several weeks.36 Ocriplasmin may additionally provide an alternative to vitrectomy in patients not considered current vitrectomy candidates, such as patients with relatively good VA but severe symptoms.14 In one study, eyes with higher pretreatment BCVA had higher rates of VMT release following ocriplasmin treatment than eyes with worse pretreatment BCVA.26 This suggests that early treatment, before significant VA decline, may result in better VMA/ VMT resolution outcomes. Ocriplasmin intervention that improved visual function was shown to improve quality of life as assessed by the National Eye Institute 25-Item Visual Function Questionnaire (VFQ-25).84

The full clinical picture of ocriplasmin efficacy will be determined through continued and consistent reporting and data analysis. Accurate analysis, including study averages, as well as subgroups and collective case reports, will help further identify ideal candidates for ocriplasmin treatment.

This article is published under the Creative Commons Attribution Noncommercial License, which permits any noncommercial use, distribution, adaptation,
and reproduction provided the original author(s) and source are given appropriate credit.

Editorial assistance was provided by Meridius Health Communications, Inc. and funded by ThromboGenics