Transconjunctival microincision vitrectomy surgery (MIVS) has grown increasingly popular among vitreoretinal surgeons over the last few years. Technical advances have led to the development of cutting-edge vitrectomy systems and instruments that significantly contributed to the success of MIVS. Trocar evolution has added extra safeness and effectiveness to the technique. In the hands of an experienced surgeon, microincision vitrectomy trocars offer a new range of applications that can redefine surgical practices and facilitate otherwise complex surgical techniques.

Critical concerns accompanying the use of and expanding indications for 23- and 25-gauge MIVS and wound sealing-related complications (hypotony, choroidal detachment and post-operative infections) have been addressed,2,3 making it common practice among some vitreoretinal surgeons to close the entry wounds of 23- and even 25-gauge MIVS with resorbable transconjunctival scleral sutures. These concerns are less evident with 27-gauge systems, even though further refinement of the 27-gauge instrument functionality and rigidity are critical to allow the widespread use of this system for the whole spectrum of vitreoretinal diseases.3

Trocar evolution has accompanied the advances in commercial vitrectomes and significantly contributed to the safeness and effectiveness of today’s MIVS. Differences in blade design and changing the insertion technique from 1- to 2-step entry5 have modified the incision architecture, thus allowing sutureless procedures. By providing a closed system, valved cannulas eliminate the need for plugs and decrease instrument exchanges, hence contributing to a better control of intraocular pressure and eye outflow intraoperatively. Furthermore, in the hands of experienced surgeons, microincision vitrectomy trocars offer a new range of applications that can redefine surgical practices and facilitate otherwise complex surgical techniques.

We aim to describe our personal experience with this invaluable tool in surgical applications other than standard MIVS.

The current standard of care in the surgical management of extensive suprachoroidal haemorrhages is the drainage of the blood through posterior sclerotomies, either alone, or, more often, in combination with MIVS for removal of concomitant vitreous haemorrhage, retained lens material or retinal detachment surgery.7 Rezende et al.8 described the transconjunctival drainage of haemorrhagic choroidal detachments using 20-gauge vitrectomy trocars. We have good experience with an adjustment of this technique, using 23-gauge microincision vitrectomy trocars. The surgery should be performed after ultrasound confirmation of liquefaction of the choroidal haematoma. With the widespread use of valved trocars in MIVS, non-valved devices are less commonly available. However, the valve system can be easily opened with the cutting vitrector tip (see Figure 1). An intraocular infusion channel can be placed in the anterior chamber and a 23-gauge trocar is introduced transconjunctively in the most affected quadrant, approximately 7 mm 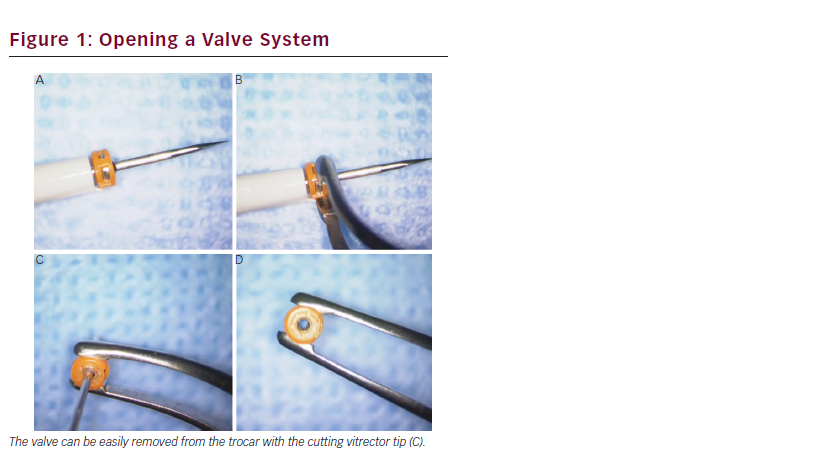 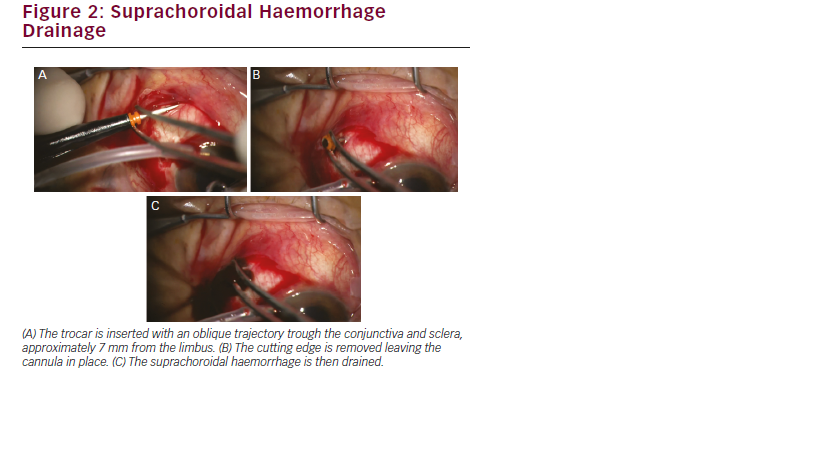 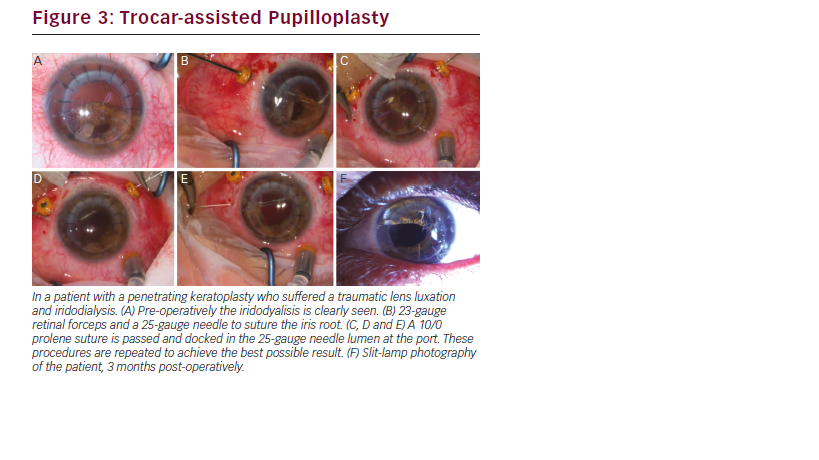 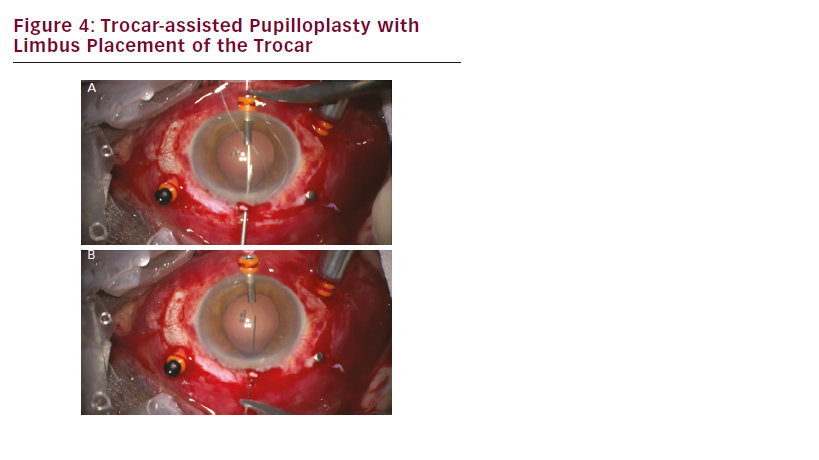 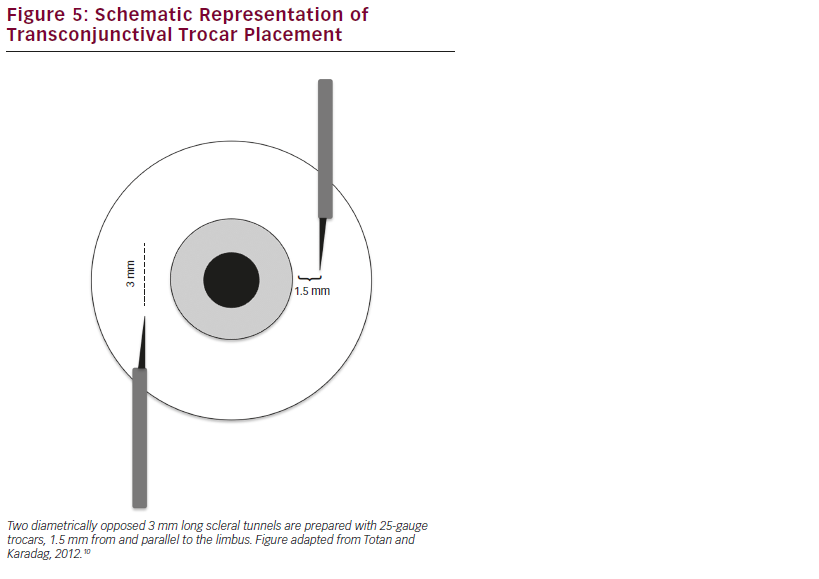 from the limbus. The trocar should be inserted gently, in a 20 to 30° angulation. After entering the cutting tip, only the cannula progresses, thus avoiding iatrogenic retinal damage. After removing the trocar blade, the cannula is repositioned in the suprachoroidal space to allow for the drainage of the blood (see Figure 2). Other openings may be subsequently performed to obtain the best possible drainage of the blood, with sutureless closing. Subsequent MIVS may follow, whenever necessary.

Another conceivable use for microincision vitrectomy trocars is in complex anterior segment surgeries requiring pupilloplasty. The trocars put in place for pars plana vitrectomy can be used to facilitate iris sutures (see Figure 3). Alternatively, trocar placement in the limbus (see Figure 4) can also be used to pass sutures with or without docking, thus ensuring a free and easy passage of suture material through a 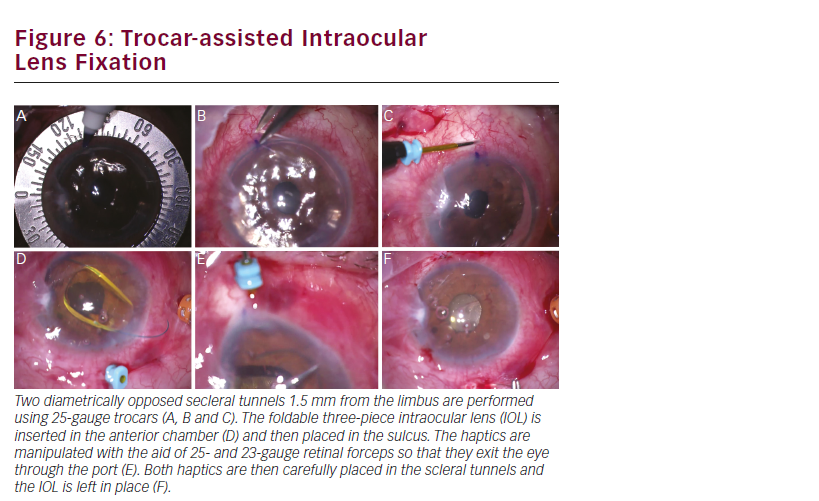 small incision opening. At the end, the trocar is removed and often no suture of the limbic entrance is required. In our experience, the use of microincision vitrectomy trocars as coadjuvants of pupilloplasty surgery has proved both practical and effective, hence facilitating an intrinsically challenging surgical procedure.

In patients with insufficient posterior capsule support after cataract surgery, a three-piece foldable intraocular lens (IOL) can be placed in the sulcus with a sutureless scleral fixation technique.9 Two diametrically opposed scleral tunnels are prepared with 25-gauge trocars, 1.5 mm from and parallel to the limbus (see Figure 5). A standard three-piece IOL is injected into the anterior chamber and the haptics are manipulated with the assistance of 25- and 23-gauge retinal forceps, through the paracentesis and the pars plana ports (see Figure 6). The haptics are then incarcerated in scleral tunnels and left in place.10 This technique is less time-consuming and provides less manipulation than the conventional scleral-suturing options.

Significant improvements in the design of microincision vitrectomy trocars over the last decade have significantly contributed to improve the success of MIVS. Moreover, these instruments have unveiled a new world of possibilities in ocular surgery, redefining surgical practices through limitless applications.

João Pedro Marques and Cátia Azenha have no conflicts of interest to declare. João Figueira has been a consultant for Alimera, Allergan, Bayer, Novartis and
THEA. No funding was received in the publication of this article.