A 34-year-old male presented complaining of ongoing symptoms of glare, ghosting, starbursts, haloes, and reduced contrast sensitivity commonly referred to by the acronym “GASH”. His unaided visual acuity achieved was a satisfactory 20/20 in each eye. To reduce his symptoms and enable driving at night, he must resort to shining the torch from his cell phone into his eyes to constrict his pupils. These symptoms are due to excess corneal astigmatism remaining, and is prevalent post refractive laser surgery when treatment is based on refractive parameters alone without any regard for corneal measures and having ocular residual astigmatism greater than 1.00D preoperatively. In this commonly prevalent clinical situation, corneal astigmatism postoperatively will be more than 1.00D, together with a significant risk of one or more symptoms of glare, starbursts, or haloes which, when they occur together, is known as predictable avoidable laser-assisted in situ keratomileusis surprise (PALS) syndrome.

A 34-year-old male presented to the clinic for a second opinion regarding ongoing symptoms of glare, ghosting, starbursts, haloes and reduced contrast sensitivity three years post-laser-assisted in situ keratomileusis (LASIK) surgery. These symptoms were exacerbated under low light conditions, particularly driving at night, and he found a reduction in their effect when shining his cell phone torch light in his eyes.

Pupil diameter under mesopic conditions was measured as: right 6.37 mm and left 6.94 mm.

Uncomplicated bilateral LASIK surgery was performed by another clinic in July 2016 using the latest generation Schwind Amaris® 1050RS Hz excimer laser (Schwind eye-tech-solutions GmbH & Co. KG, Kleinostheim, Germany) with the treatment based on the manufacturer recommended practice of manifest refraction only. The optical and the ablation zones were 6.70 mm and 7.63 mm, respectively.

It is interesting to note that there was still a significant amount (>1.00D) of corneal astigmatism remaining in each eye after both the first treatment and the second enhancements, which were based on the manifest refraction parameters alone. Treating the maximum amount of astigmatism by incorporating the corneal parameters into the refractive treatment  plan employing Vector Planning1 would have left less corneal astigmatism postoperatively and reduced symptoms of glare, ghosting, starbursts, and haloes. 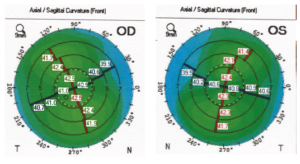 To treat the maximum amount of astigmatism, calculation of the ocular residual astigmatism (ORA) is required in each case. The ORA is defined as the vectorial difference between the corneal astigmatism and the refractive cylinder at the corneal plane.1 It is expressed in dioptres together with an axis and has been shown to be more than 1.00D in 46% of cases2 in one study and 34% of cases in another study.1

In this case, the ORA preoperatively was right 0.99D Ax 6 and left 1.24D Ax 174 (Figure 2). Due to the pre-existing corneo-refractive differences the ORA is the minimum amount of astigmatism that can remain postoperatively. Treatment based on the refractive parameters alone, as was the case here, would leave all the ORA, theoretically 0.99D @ 96 for the right eye and 1.24D @ 84 for the left eye to be directed to the cornea postoperatively. Note that this is 90 degrees away from the ORA axis to neutralise it. Even after the second treatment, which again was based on refractive parameters to reduce the refractive cylinder, there was still predictably a substantial amount of corneal astigmatism (>1.00D) remaining: right 1.12D @ 90 and left 1.04D @ 85 due to the significant amount of ORA.

Figure 2: The ocular residual astigmatism is calculated as the vectorial difference between manifest refractive cylinder at the corneal plane and corneal astigmatism

Figure 3: Calculation of ocular residual astigmatism for the right eye

Applying Vector Planning to this case study, the ORA calculated for the right eye is 0.99D Ax 6. By emphasising, for example, 60% of the ORA towards refraction and 40% towards topography, 0.59D @ 96 would be targeted on the cornea and -0.39D x 96 in the refraction (Figure 3). This compares to 1.12D @ 90 of corneal astigmatism that the patient has postoperatively.

Vector Planning targets a spherical equivalent of zero in the refraction and because of the better corneal shape that the patient is left with postoperatively, compared to treatments based on refractive parameters alone, the targeted refractive cylinder has been shown not to be accepted by the patient in the postoperative manifest refraction.

Unfortunately, the patient did not want to undergo any further (third) surgery to reduce his symptoms, but was advised that Vector Planning was a viable option.

Excess corneal astigmatism is prevalent post refractive laser surgery with many complaints now documented in letters to the US Food and Drug Administration and the New York Times of symptoms of glare, ghosting, starbursts, haloes, or decreased contrast sensitivity, now commonly termed GASH6 as the acronym to describe these symptoms.

The method of Vector Planning can address the excess corneal astigmatism causing these disturbing symptoms and improving patient vision quality and satisfaction rates post-LASIK. The prevalence of these symptoms and signs together qualifies it as a syndrome. An ORA of more than 1.00D preoperatively and corneal astigmatism of greater than 1.00D postoperatively, together with any one or more of the GASH symptoms constitutes preventable avoidable LASIK surprise (PALS) syndrome. This syndrome is preventable by calculating the ORA preoperatively to ascertain how much corneo-refractive difference there exists. It is avoidable using the method of Vector Planning to reduce excess corneal astigmatism postoperatively, it can validly apply to photorefractive keratectomy and small incision lenticule extraction as well as LASIK procedures and the surprise of GASH can be minimized or eliminated by maintaining postoperative corneal astigmatism at less than 1.00D.

Laser manufacturers need to incorporate the Vector Planning method as a standard function of their laser systems, allowing all surgeons this option to maximally treat astigmatism and prevent PALS syndrome. This is currently not available on any laser. For surgeons who want to avail themselves of this facility of ORA calculation and Vector Planning with their refractive laser surgery, this is available as a free application at www.assort.com.⬛

All named authors meet the International Committee of Medical Journal Editors (ICMJE) criteria for authorship of this manuscript, take responsibility for the integrity of the work as a whole, and have given final approval to the version to be published.

Excess corneal astigmatism can cause visual aberrations, resulting in symptoms of glare, starbursts and halos. Astigmatism has long been difficult to correct with refractive laser surgery. The challenge has been to maximally reduce both corneal and refractive astigmatism while ensuring that any remaining corneal astigmatism is regular, symmetrical and orthogonal, with a typical ‘bow-tie’ topography.1 However, […]