Purpose: The introduction of vascular endothelial growth factor (VEGF) inhibitors began a new era in the treatment of exudative age-related macular degeneration (ARMD). These drugs are effective at suppressing choroidal neovascularization (CNV) resulting in improvement or stabilization of visual acuity; however, the chronic nature of the disease require these drugs be administered periodically (usually monthly) for the life of the patient. Since intravitreal injections are administered through the sclera, there is the possibility of adverse events, such as vitreous hemorrhage, endophthalmitis, retinal tears, or retinal detachment. To avoid some of the adverse events associated with intravitreal delivery via the scleral route we have developed a technique to deliver bevacizumab (Avastin®) into the vitreous cavity in pseudophakic eyes via a corneal route. Methods: A 27-gauge, 5 mm angled cannula attached to a 1.0 ml syringe is fitted into an 11 o’clock limbal incision and advanced through the anterior and posterior chamber. The cannula is maneuvered through the zonules into the vitreous and 0.1 ml of Avastin is delivered behind the lens into the vitreous cavity. The procedure was performed in 50 eyes (Addendum 1: 499 injections 2014–2015), of five exudative ARMD patients, 21 diabetic macular edema (DME) patients, two cystoid macular edema (CME) patients, and one central retinal vein occlusion (CRVO) patient. Visual acuity (VA), edema, optical coherence tomography (OCT), and endothelial cell counts were performed 1 day following Avastin administration. VA was also determined in 16 eyes at 1 month after Avastin administration. Results: At 1 day post-Avastin administration, vision acuity and edema index improved or remained stable in all eyes, with the exception of one eye from an exudative ARMD patient whose vision deteriorated. At 1 month the average visual acuity in 16 eyes was also significantly improved. The improvement in edema was evident through retinal OCTs. No change in endothelial cell counts was observed. Conclusions: Administration of Avastin via an anterior chamber route in pseudophakic (Addendum 2: Phakic eyes were also treated with no cataract formation) patients is effective for the treatment of exudative ARMD, DME, CME and CRVO, minimizing the possible adverse events related to the administration by the traditional scleral route. In addition, anterior segment administration allows the ophthalmologist to directly observe the delivery of the drug with microscope precision. Pars plana injections are usually performed without magnification and no direct visualization.

In 2006, the US Food and Drug Administration (FDA) approved Genentech’s ranibizumab (Lucentis®), a Fab fragment of a humanized monoclonal antivascular endothelial growth factor (VEGF)-A designed for intraocular use for the treatment of exudative age-related macular degeneration (ARMD). Since 2006, ranibizumab and its parent monoclonal antibody bevacizumab have been extensively used to treat exudative ARMD. Intravitreal injections of

bevacizumab and ranibizumab have become the most common treatment for exudative ARMD resulting in visual stabilization in 90 % of patients and a gain of 3 or more lines of visual acuity (VA) in 30–40 % of the patients.1–3 Even though the development of inhibitors of VEGF has transformed the treatment of exudative ARMD and other ocular neovascular diseases, the repeated intravitreal injections necessary to prevent the reoccurrence of neovascularization are not without side effects. These include endophthalmitis,4 ocular hypertension, submacular hemorrhage, and the possibility of systemic diffusion resulting in long-term thromboembolic events.5–8 Since the introduction of the anti-VEGF antibodies bevacizumab (Avastin®) and ranibizumab (Lucentis) for the treatment of ARMD, ophthalmologists have used these anti-VEGF for the treatment of other neovascular ocular diseases, such as proliferative diabetic retinopathy, diabetic macular edema (DME), and cystoid macular edema (CME).8–11 Even though the rates of serious ocular adverse events are low, in the range of 1–2 %,8,9 the increased use of these drugs has meant an number of cases with significant serious side effects. Intravitreal injection with an anti-angiogenic drug is accomplished by anesthetizing the patient locally with an injection of lidocaine or a topical anesthetic, followed by the injection of the anti-VEGF, usually infero-temporally, 3.5 to 4 mm posterior to the limbus through the pars plana. Even though the procedure is simple, it is not possible to observe the precise site where the injected agent is delivered, thus risking possible injury to the retina and choroid and lens. In addition, the injection in painful and frightening for the patient (see Figure 1A). To decrease the difficulties associated with intravitreal injections we have explored the delivery of bevacizumab via a corneal route in pseudophakic eyes. Here we report that the delivery of bevacizumab via a corneal route is effective in decreasing edema in patients with diabetes and in stabilizing and/or increasing vision in exudative ARMD patients, while minimizing potential retinal damage and adverse affects on corneal endothelial cells (see Figure 1B).

Material and Methods
Administration Procedure
Informed consent was obtained from all patients.

The eye is dilated using one drop of tropicamide ophthalmic solution (1 %) and one drop of phenylephrine hydrochloride ophthalmic solution (2.5 %). The patient is placed supine under the operating microscope with the microscope light off. After scrubbing the eyelids with 1 % povidone iodine, a drop of povidone iodine is instilled in the eye, followed by a drop of the local anesthetic, 0.5 % tetracaine hydrochloride (Alcon Laboratories, Dallas, TX, US). The eye is draped with Tegaderm dressing (3M, St Paul, MN, US). A lid speculum is placed.

A Mastel ring light and fixation light are used to fixate the eye. Using an Alcon (Fort Worth, TX, US) single-use ophthalmic 15° angled knife, a 0.4 mm paracentesis is made at the limbus at 11 o’clock. 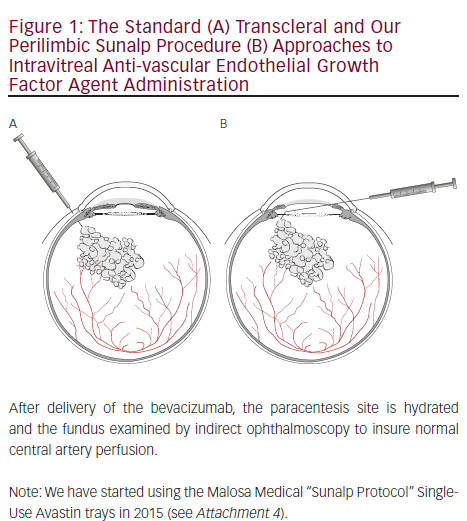 Some complications associated with intravitreal injections, such as conjunctival hemorrhage, retinal tears, and retinal detachment are caused by the injection through the sclera without the ability to visualize the delivery point. We have shown that it is feasible to administer Avastin via a corneal route in the vitreous cavity in pseudophakic patients without any complications and with similar effectiveness as administration via the intravitreal route, and with minimal discomfort and no pain.

Is the administration of Avastin via the corneal route safe and is there is loss of drug via aqueous outflow? A number of studies in animal models and in humans13–15 have shown that intracameral bevacizumab for the treatment of neovascular glaucoma in humans is safe and effective and does not have any harmful effects on the cornea and on endothelial cells in particular. Our data support other findings that injections of bevacizumab via the corneal route does not affect endothelial cell numbers or morphology.

To our knowledge, there are no studies on the effect of corneal route administration of anti-VEGFs on choroidal neovascularization (CNV). However, there are a number of studies in animals that show that intravitreal injection of bevacizumab diffuses freely into the aqueous and cornea. In a study on the effect of bevacizumab on corneal neovascularization in animal models both intracameral and intravitreal administration were effective and bevacizumab was detected in the anterior chamber by day 2 after administration.16 In a similar study, ranibizumab was detected in the aqueous 3 days after intravitreal injection17 indicating that these drugs persist in the vitreous and aqueous for some time. In fact, half-life of ranibizumab in the vitreous is 2.88 days and the half-life in the aqueous is 2.84 days17 indicating that these drugs do not exit with aqueous flow.

Since the route of penetration into the posterior retina of bevacizumab or ranibizumab is not known nor is known what the effective concentration of either of these drugs is necessary to inhibit CNV, the only reliable means to assess effectiveness is by experimentation. In the present study, VA improved in three of the nine eyes of neovascular ARMD patients, was stabilized in five eyes, and deteriorated in one; this result is similar to results obtained in a number of large studies using intravitreal administration. In addition, OCT images in our study clearly show that the edema accompanying diabetic retinopathy, exudative ARMD, and cystoid macular edema did recede following administration of bevacizumab via the corneal route indicating that an effective concentration of the drug reached the subretinal space. To our knowledge this is the first study demonstrating that corneal route administration of bevacizumab is effective for the treatment of subretinal neovascularization.

Summary Statement: Delivery of bevacizumab via anterior segment route in pseudophakic eyes is a safe and effective method for treatment of ARMD degeneration and DME that minimizes the possibility of injury to the retina or sclera.

Murad A Sunalp, MD, MBA, FACS, Lindsey B Buchbinder BS, MPH, and Myhidin H Shehu, MD, MBA, have no conflicts of interest to declare. No funding was received in the publication of this article. A Novel Avastin injection technique “Sunalp Protocol” was first presented by Murad A Sunalp, MD, MBA, FACS, at ASCRS, San Diego,
California in March 26, 2011.
Compliance with Ethics Guidelines: All procedures were followed in accordance with the responsible committee on human experimentation and with the Helsinki Declaration of 1975 and subsequent revisions, and informed consent was received from the patients involved in this study.