Back to Activity
CORRECT!
Next question

Eye trauma has always been part of ophthalmologist’s everyday practice. The most common form of open-globe trauma is the corneal laceration. Unfortunately, the treatment of these lesions has been seeped in tradition. At the dawn of the 20th century, the management of these wounds involved the use of a conjuctival flap to cover them, since suture material and instrumentation were totally inadequate for wound suturing. These wounds were sutured directly when 6 and 7-0 silk sutures with atraumatic needles appeared in the ophthalmologists’ armamentarium in the 1950s.1-3 These sutures were too thick and braided, so a partial-thickness corneal suture was proposed to avoid the wick effect connecting the anterior chamber with the outside. It was also thought that the passage of the needle and suture material across the endothelium would damage it unnecessarily. These ideas became dogma and are still considered valid, even though much better suture material and needles have been developed. The current thought among many eye trauma surgeons is that, with current techniques and materials, full-thickness corneal sutures require less tissue manipulation, provide better tissue apposition with better and faster recovery of corneal transparency and better scarring with no added complications.4

To such effect, we conducted a blind study in eight pigs that underwent a standardized linear corneal wound in one eye.5 Four eyes were sutured using partial-thickness (PT) 10-0 nylon simple sutures (placed at 80–90% corneal thickness) and four eyes were repaired with full-thickness (FT) sutures. Two eyes with each technique were randomly assigned and performed by two experienced surgeons. Slit-lamp exam, ultrasound corneal pachymetry, anterior segment optical coherence tomography (OCT) were obtained preoperatively and on the first day, at week 1, 4 and 8 postoperatively. Pigs were sacrificed and eyes obtained for histopathologic exam 8 weeks post surgery (Figure 1). All postoperative exams and the histopathologic exam of the eyes were performed by blinded observers. Gathered data by clinical exam included: presence of corneal leakage, grade of corneal edema, scar opacity and vascularization, pachymetric corneal thickness at the wound and corneal wound architecture by OCT. Histopathologic analysis after fixation was done on eight micron sections stained with hematoxylin-eosin and Masson’s trichrome.

On clinical exam, postoperative corneal oedema was greater in the PT group at one week postoperatively, but tended to show no difference at the eighth week. Corneal wounds sutured with full-thickness technique showed a more linear, less opaque scar than the PT technique at 8 weeks (p=0.02). Sutures were found to lose tension towards the fourth week in the PT eyes. This was not seen in the FT-sutured eyes. At 8 weeks, vascularisation of the wound was present in 75% of the PT group and 25% of the FT eyes (p=0.5).  No cases were recorded of wound leakage or dehiscence. Pachymetric measurements confirmed the clinical findings regarding corneal thickness and oedema. An increase in corneal thickness from baseline was found in all corneas. But this increase was more pronounced in the PT group: (median baseline pachymetry: 556 µ, 1 week postop: [PT] 788 versus [FT] 725 µ, 4 weeks [PT] 724 versus [FT] 686 µ, 8 weeks: [PT] 670 versus [FT] 62 3µ). On corneal OCT, the wound was found to have poor posterior surface wound coaptation in the PT group during the first four weeks tending to disappear toward week 8. These wounds developed a fibrous membrane bridging the endothelial gap while the FT group had the smaller gap with endothelialisation of the posterior surface.

Full thickness suture of corneal wounds seem to show a better healing process with less opaque scars, less vascularisation, less oedema and a faster return towards a normal corneal thickness (Figure 2). This appears to be due to the fact that the posterior stroma and endothelial surface have better apposition preventing aqueous access to the stroma diminishing corneal oedema and inflammation. This oedema seems to decrease even minutes after the wound is closed which may prove to be a great advantage in eyes that require further posterior segment surgery. The FT group showed no wound leakage at the suture sites. This appears to confirm the idea that the suture tract seals after the passage of such a thin needle and suture material. The endothelium appears to have suffered less damage with this strategy by expecting it to cover a much smaller gap in the posterior surface than the large breach left by the partial-thickness suture.

We did not remove these sutures before obtaining the eyes so the possibility of leakage from the suture site with suture removal was not studied but no histopathologic evidence was found to suggest that the tract remains permeable after scarring. Although not consistent, some endothelium was found to grow over the full-thickness sutures, making the wound impermeable even on suture removal. It was curious to find some of the PT sutures lost tension after a few weeks, unlike the FT sutures. This might be due to the fact that FT sutures include Descemet’s membrane, which might prevent a cheese-wiring effect of the suture material into the corneal stroma. Loose sutures are known to increase inflammation and wound vascularization.

Our study does not prove that human corneas follow the same behaviour, but it does show that this technique has its advantages and should be tried clinically.

Figure 1: A: Slit-lamp photo of eye with corneal wound sutured with full thickness sutures at 8 weeks post repair. Notice the moderate corneal opacity and full tension in corneal sutures with no wound vascularization. B: Photo of corneal wound sutured with partial thickness sutures at 8 weeks post repair. The cornea has a denser leukoma with wound vascularization and loss of suture tension. 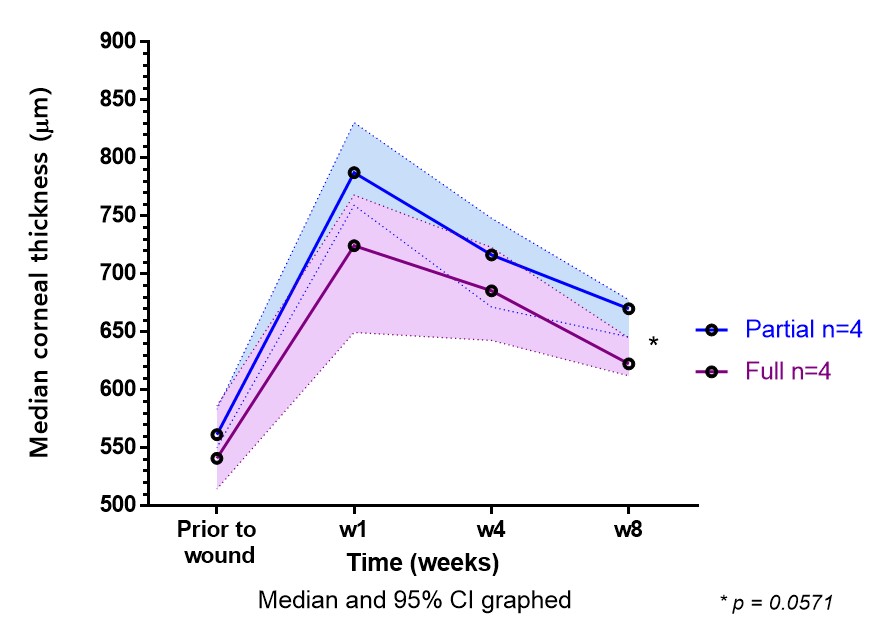 Disclosures: José Dalma-Weiszhausz has no financial or non-financial relationships or activities to declare in relation to this article.

Support: Edited and supported by Touch Medical Media. No funding was received in the publication of this insight article.