Optical coherence tomography angiography (OCTA) is a non-invasive angiography type without a contrast agent, which provides a detailed assessment of the retinal and choroidal vasculature and visualisation of blood flow by detecting motions of erythrocytes, using serial optical coherence tomography B-scans. OCTA has been thoroughly investigated during imaging of the microvasculature in various retinal and choroidal vascular and tumoural diseases that affect the central macula. It has some important advantages and some acceptable disadvantages.

The aim of this review is to provide some general information about OCTA, including the algorithms used, commercial/uncommercial devices and their specifications, and the advantages and disadvantages of OCTA for retinal and choroidal vascular imaging.

In recent studies, it has been demonstrated that OCTA provides visualisation of microaneurysms, telangiectasia, the retinal non-perfused area, vascular dilatation and attenuation and neovascularisation in the retina and choroid. OCTA has important advantages and some disadvantages. The imaging of choriocapillaris, and the neovascular vessels at avascular outer or deep retina mapping using the segmentation algorithm might be more important, especially in cases of early or intermediate AMD or PCV to detect core vessels.1–11

OCTA can penetrate retinal haemorrhage, depending on the density of the haemorrhage. OCTA can also identify the retinal ischaemic areas through the high contrast between vessels and the surrounding retina.1–10 Also, OCTA is now considered very useful in the investigation of retinal and choroidal tumours.

The comparison of the specifications of these OCTA devices based on their brochures, manuals and data from some studies utilising these devices (as mentioned in the references) is given in Table 1.

In a recent study, when algorithms including OMAG, speckle variance, phase variance, SSADA and correlation mapping were compared, it was found that OMAG, as the method utilising complex OCT signals to contrast retinal blood flow provided the best visual result for the of retinal microvascular networks concerning image contrast and vessel connectivity.26

The imaging contrast of OMAG is based on the intrinsic optical scattering signals backscattered by the moving erythrocytes in patent blood vessels. In contrast to the above-mentioned other OCTA algorithms, 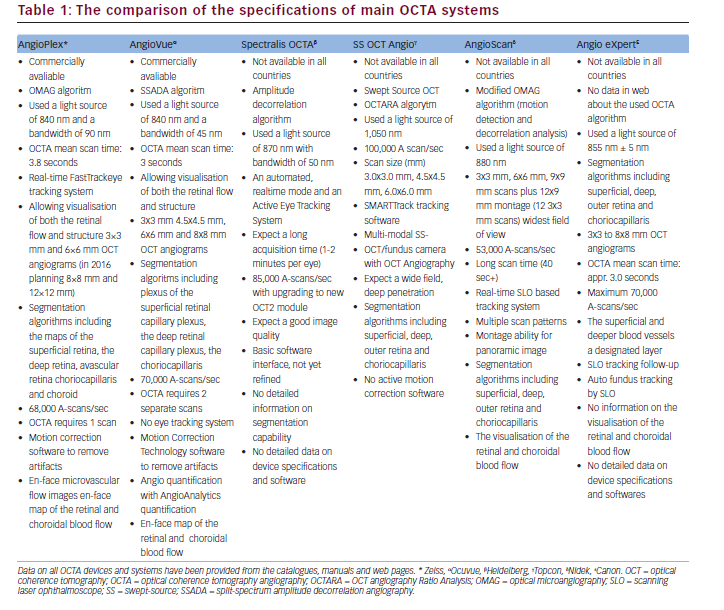 OMAG uses both amplitude and phase in the OCT signals to show the blood flow within the tissue.16,17

The SSADA has been developed by Huang J and it compares sequential consecutive OCT scans with each other. The SSADA uses multiple spectrums from a single B-scan to improve the image quality. So, SSADA can achieve high-quality vascular images with low-achieving times and a reduced number of repeat B-scans.26,27

The OCTARA, an OCTA algorithm developed by Topcon is based on swept-source OCT and the intensity ratio calculation, but not amplitude decorrelation, and it demonstrates improved detection sensitivity of microvasculature.19,20

AngioPlex is an OCTA system developed by Zeiss and it can have builtin a CIRRUS HD-OCT 5000 device (Carl Zeiss Meditec, Jena, Germany) with new software and minor hardware upgrades. It uses the entire OCT signal, FastTracTM and OMAG algorithms to visualise the microvasculature. AngioPlex uses both amplitude and phase aspects of the OCT signal, which are different from other systems that only use one. AngioPlex OCTA is able to separately visualise vessels of the superficial retina, the deep retinal layer, the choriocapillaris and the choroid (Figure 1A–H).17,24 The colour retinal depth map combines superficial, deep and avascular retina maps and provides the depth visualisation of retinal and choroidal blood flow (Figure 1B). In colour retinal depth map, superficial, deep, avascular layers are seen in red, green and blue, respectively. AngioPlex Map is a reconstructed map of the perfused microvasculature within the retina and choroid (Figure 1C). The superficial retinal layer is the layer between the internal limiting membrane (ILM) in the inner border and the inner plexiform layer (IPL) in the outer border (Figure 1D). The deep retinal layer has an inner border of IPL and an outer plexiform layer (OPL) of the outer border (Figure 1E). The avascular retina is the layer between the OPL in the inner border and inner segment/outer segment junction (IS/OS line) in the outer border (Figure 1F).1–3,17,24

AngioVue OCTA is commercially available in Avanti SD-OCT device (Optovue Inc., Fremont, CA). It uses the SSADA algorithm to obtain images. In AngioVue, segmentary OCT angiograms in en-face projections of the superficial, intermediate and deep inner retinal vascular plexuses, outer retina and choriocapillaris can perform manually. The superficial inner retina segmentation shows vasculature in the retinal nerve fiber layer (RNFL) and ganglion cell layer (GCL). The vascular plexuses at the border of the IPL and inner nuclear layer (INL) and the border of the INL and OPL are displayed by the intermediate and deep inner retina segmentations, respectively.18

SS-OCT Angio is an OCTA system with fundus camera, based on a swept source (SS) OCT and OCTARA (OCT Angiography Ratio Analysis) algorithm developed by Topcon. It has a high scanning speed of 100,000 scan/sec, wide scanning field, a deep penetration multi-modal imaging option including fundus fluorescein angiography (FFA) and indocyanine green angiography (ICGA), as well as the same specifications as in the above-mentioned devices.19,20

Utilities and advantages of OCTA:1,3,13–15,27–34
• The assessment of the retinal and choroidal vasculature.
• The visualisation with high resolution of blood flow in various layers of the retina.
• The fast and three-dimensional clear visualisation of vascular structures.
• The quantitative measuring (flow and area) in neovascular vessels.34

• The visualisation of some microaneurysms.

Disadvantages and limitations of OCTA:1,3,13–15,27–33
• No information on blood–retinal barrier leakage and the failure to show the leakage and to assess vascular permeability.
• The lack of visualisation of all microaneurysms.

• The artifacts due to blinking and motion or vessel ghosting, vessel doubling, stretching of the image.
• Signal attenuation/masking below optically dense material (thickened retinal pigment epithelium or hard exudates) to be mistaken for flow voids. 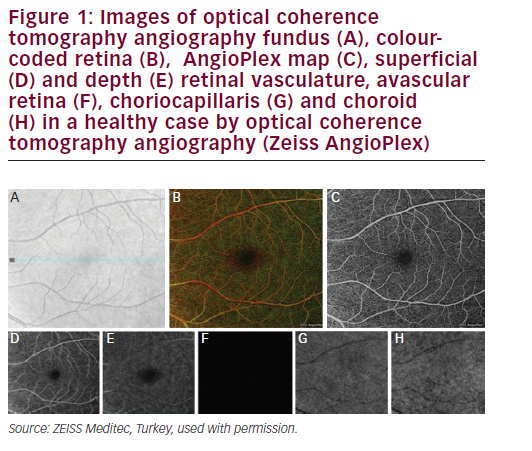 • The fade out of the flow signal in OCTA in large vessels due to very fast blood.
• A limited field of view.
• The necessity for some algorithms, such as SSADA or OMAG to provide detailed high-quality OCTA images.
• A reduction in the image resolution when its scanning area is increased.

In conclusion, OCTA provides information about areas of capillary nonperfusion, vessel dilation and attenuation, telangiectasia, microaneurysm, and neovascularisation (NV).3–11 Because OCTA can image the separate retinal layers, it can be used to easily visualise choroidal neovascularization (CNV).3,30–33 In a healthy eye, there is an avascular retinal region in the deep or outer layer of the retina.30–35 The outer retina segmentation by OCTA in normal eyes should show no blood flow between the OPL and Bruch membrane. OCTA can allow for early detection of NV in this outer avascular retina in the eye with neovascular AMD. In a recent report, it has been demonstrated that swept-source OCTA identified type 1 choroidal neovascularisation in asymptomatic eyes with intermediate AMD.6

In another study, OCTA revealed the reduced vessel density in both the superficial and deep inner retinal plexuses and reduced choroidal thickness compared with controls in early to intermediate AMD.37 Additionally, it was observed in OCTA that there was impairment in choriocapillaris blood flow below and adjacent to areas of geographic atrophy in AMD.38

On the other hand, in a recent study by Dansingani et al., it was reported that OCTA has the ability to distinguish the vascular subretinal hyperreflective material (SRHM) due to type 2 macular neovascularisation from avascular SRHM due to fibrosis, exudation, vitelliform material and haemorrhage and that SRHM has prognostic significance in macular diseases such as AMD, myopia, pachychoroid disease and macular dystrophy.39

In a new study, Battaglia Parodi et al. demonstrated that OCTA revealed the alterations especially located at the level of the deep capillary plexus (DCP) and the choriocapillaris in chorio-retinal dystrophies.40 Additionally, in another study in which the authors analysed vascular density in patients with retinitis pigmentosa using OCTA, they showed that vascular impairment in patients with RP was generally localised in the DCP.41

In conclusion, further studies are needed to clearly understand the potential roles of OCTA in diagnosis, follow-up, treatment and evaluation of the prognosis in various retinal and choroidal diseases.

Burak Turgut has nothing to disclose with with any firm, trade or device in relation to this article. Figures have been provided to the author from ZEISS Meditec Inc., Turkey. No funding was received for the publication of this article.