Rubeotic or neovascular glaucoma is an aggressive secondary glaucoma, which if untreated, rapidly progresses to permanent and devastating visual loss. First described in 1871, it has also been labelled as haemorrhagic glaucoma, thrombotic glaucoma or congestive glaucoma. It results from neovascularisation of the iris and angle structures as a result of severe, diffuse and chronic retinal ischaemia. The underlying aetiology could be any one from a list of over 20 different potential causes,1 with central retinal vein occlusion, proliferative diabetic retinopathy and ocular ischaemic syndrome following carotid artery obstruction accounting for over 80%.2

Practical assessment of patients with neovascular glaucoma or suspected neovascular glaucoma involves careful undilated examination of the iris, and gonioscopy using a high-magnification lens such as Ocular Magna View Gonio (Ocular Instruments Inc., Bellevue, WA, US) is essential to detect early angle neovascularisation, assessment of aqueous flare, and should be followed by retinal examination to determine the underlying pathology. Although neovascularisation usually progresses from the pupil margin towards the angle, angle neovascularisation can sometimes precede iris neovascularisation, especially when due to central retinal vein occlusion.3 Iris fluorescein angiography can be used to detect rubeosis prior to it being clinical evident on slit lamp biomicroscopy.4 Assessment of visual potential is also key to directing management options.

The natural course of neovascular glaucoma follows three distinct stages, with associated changes in intraocular pressure (IOP):
• Rubeosis – angiogenic factors released in response to retinal ischaemia diffuse into the anterior segment and lead to angiogensis from existing vasculature of the iris and neovascularisation of the angle of the anterior chamber. IOP is usually normal at this stage.
• Secondary open-angle glaucoma – raised IOP results from a fibrovascular membrane arising from increasing angle neovascularisation, which reduces trabecular meshwork drainage.
• Secondary angle-closure glaucoma – continued anterior chamber neovascularistion and subsequent contraction of the fibrovascular membrane, causes progressive closure of the anterior chamber angle. Circumferential pulling of the iris over the trabecular meshwork results in very high IOP.

Treatment priorities also differ with each stage of the neovascular process (see Figure 1).

Patients with neovascular glaucoma differ from those with primary open-angle glaucoma or other types of secondary glaucoma in a number of important ways, which determines the most appropriate management (summarised in Figure 2).

Pan-retinal photocoagulation (PRP) is the essential treatment for all eyes with neovascular glaucoma that have visual potential, to address the retinal ischaemia and prevent progression. If detected at the rubeosis stage, this may be sufficient to halt and reverse the neovascularisation. Sufficient laser treatment is essential, as applying 1200–1600 laser burns has been found to be twice as effective in regressing rubeosis 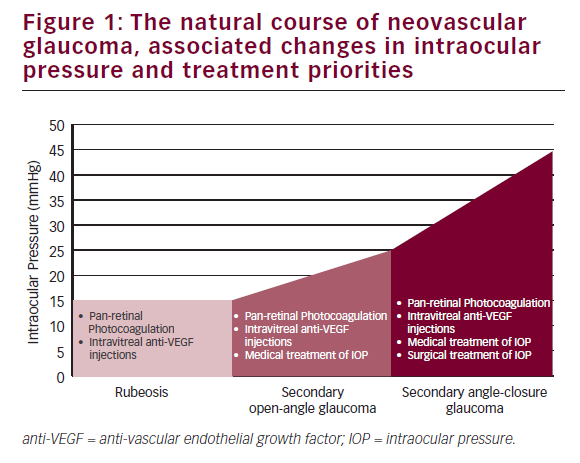 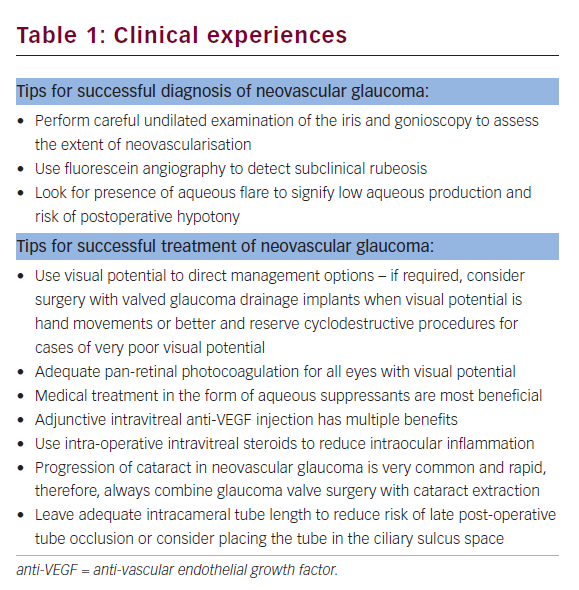 compared to 400–650 spots.5 Difficulties may arise in performing PRP due to corneal oedema (from raised IOP), vitreous haemorrhage or hyphaema, or co-existing dense cataract, which may need treatment prior to undertaking PRP.

Intravitreal anti-vascular endothelial growth factor (VEGF) injection has been clearly shown to have an effective adjunctive affect to PRP and reduce further progression.6 It can produce rapid regression of iris neovascularisation,7 as the onset of action is much faster than PRP, and can also help control IOP in the secondary open-angle glaucoma stage. Even if secondary closed-angle glaucoma has been established, it may be useful prior to surgery to reduce intra-operative haemorrhage and improve surgical success rates.8 VEGF levels in the aqueous humour of patients with neovascular glaucoma are known to be 15–20 times that of normal eyes.9 Intravitreal anti-VEGF is therefore recommended for all stages of neovascular glaucoma. Caution should, however, be taken in cases of ocular ischaemic syndrome as one study observed central retinal artery occlusion in 50% of patients following intravitreal bevacizumab.10 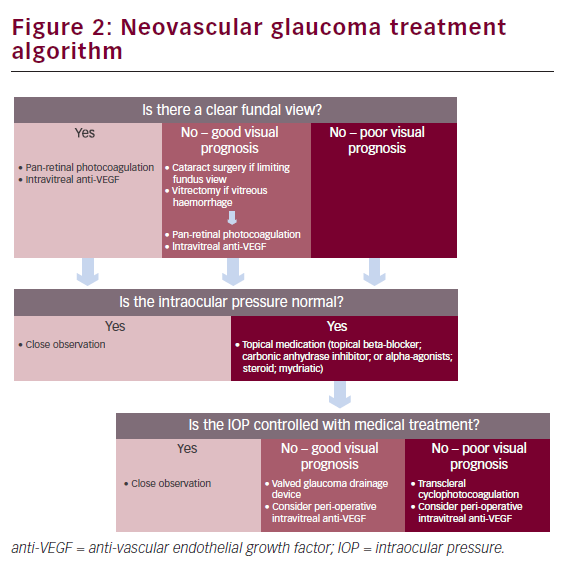 Medical IOP lowering treatment is required if secondary open-angle glaucoma has already developed. Aqueous suppressants in the form of topical beta-blockers, carbonic anhydrase inhibitors or alphaagonists are preferable to prostaglandin analogues which may be ineffective due to obstruction of the uveoscleral outflow pathway. Miotics are also best avoided.

Surgical IOP lowering is usually required to manage neovascular glaucoma once at the secondary angle-closure glaucoma stage. This is the most challenging treatment and has a number of different options. If the visual potential is hand movements or better it is reasonable to pursue surgical options. Given the high levels of VEGF and inflammatory mediators present in patient with neovascular glaucoma, trabeculectomy surgery is at high risk of failure. Success rates after two years have rarely been reported to be in excess of 60% even with mitomycin C augmentation.11

In our experience, trabeculectomy is not a suitable option for neovascular glaucoma and drainage implants (tubes) are first choice. Patients with neovascular glaucoma are known to have significantly reduced aqueous production as a result of hypoperfusion of the ciliary body, which can be confirmed by the presence of anterior chamber flare. Glaucoma surgery is therefore associated with high risk of postoperative hypotony, thus our preference is to use a valved glaucoma drainage device such as the Ahmed® Glaucoma Valve (New World Medical, Inc, Rancho Cucamonga, CA, US). The intraocular opening of the tube is more prone to occlusion with membranes and iris tissue, therefore, it is important to leave an adequate intracameral tube length or place the tube in the ciliary sulcus space which is often pathologically expanded. We also recommend pre-operative intravitreal anti-VEGF injection plus intra-operative intravitreal steroids to reduce intraocular inflammation if pseudophakic or combined with cataract surgery.

Cataract progression is usually rapid in this group of patients who will almost all require cataract surgery at some stage. We would therefore strongly recommend valve surgery combined with cataract extraction and intraocular lens implant at the same time.

In cases of very poor visual potential, the aim of treatment is to control pain, which usually arises from the uncontrolled IOP and subsequent corneal oedema. Cyclodestructive procedures such as transcleral cyclophotocoagulation is successful in achieving symptom control in combination with topical steroids and cycloplegia, albeit with risk of hypotony and phthisis.12 Additional intravitreal anti-VEGF has also been shown to be a useful adjunct in producing rapid pain relief in refractory neovascular glaucoma.13

Long-term outcomes and the prognosis of eyes treated with the latest approaches in the management of neovascular glaucoma are lacking from recent literature. However, the addition of intravitreal anti-VEGF has revolutionised the treatment of neovascular glaucoma, and in combination with early detection, thorough pan-retinal photocoagulation and safe surgical intervention should result in long-lasting maintenance of visual functional and acceptable IOP control.

Ian A Rodrigues and K Sheng Lim have no disclosures or conflicts of interest relevant to this article to declare. No funding was received in the publication of this article. This article is a short opinion piece and has not been submitted to external peer reviewers but was reviewed by the advisory board before publication.
Published Online: 4 August 2016